Help Us Name Our House 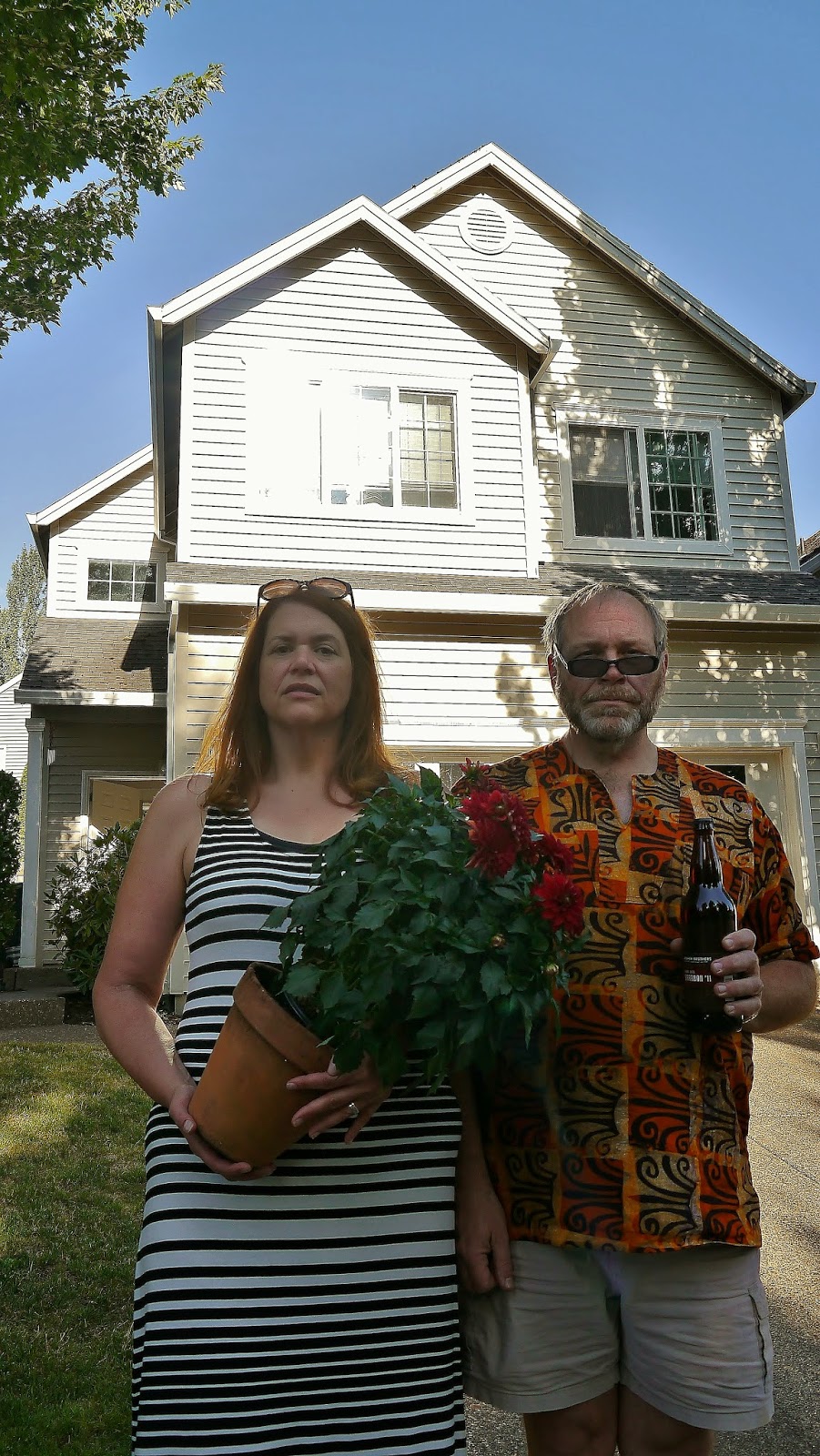 It took a solid hour of signing, dating, and initialing documents, many of them near duplicates of each other because, for some arcane titular reason, we had to break the purchase into two different mortgages; and then, called back from lunch, another hour because the bank rejected some of the dates we had scrawled as unacceptably sloppy; but finally, at around 3 p.m. yesterday, we became the proud owners of 6420 NW Starflower Drive.

So here I am, married, mortgaged, joined at the wallet as I haven't been with anyone in fifteen years, and even then only for a few weeks, as that house purchase came at the very end of my short, troubled second marriage, and I was bought right back out of it by my ex as soon as we separated. Buying a house with my wife and actually getting to live in it with her is a whole new experience for me.

There will be many more new experiences associated with this purchase in the days ahead. I've never been fully responsible for the maintenance and improvement of a house. As a pastor, I could always call on the trustees to clean, repair, or replace some part of a parsonage that needed tending to. I did some painting and wallpapering, but for the most part, it was the church that took care of such things--or, more likely, put them off as too expensive. Since leaving ministry, it's been the property manager who dealt with any issues I had with my house or apartment.

Those days are gone. Yesterday we joined Angie's List, and are already at work researching and hiring contractors to clean and repair the roof, gutters, and siding; to clean the vents and tune up the HVAC; to refurbish the kitchen and at least one of the bathrooms; and, at some point (though with all the other things we want to have done, it's not on the front burner) to paint most of the interior.

Ownership imbues us with a strange blend of responsibility and freedom. On the one hand, we do not have to ask anyone's permission as we pick patterns and colors for the counter, backsplash, and walls. We can take down the hideous entryway mirrors, repaint the banister, replace the cheap faucets, overhead lights, and ceiling fans according to our own tastes. On the other hand, every penny of doing any of those things comes out of our pockets. It's all up to us. And any changes we make to the house must be made with an eye toward eventual resale.

Because this is not our retirement house. There are things we love about it--it's a very quiet neighborhood, the patio is a great place to hang out, it puts us in the right area for Sarah to attend Westview High School--but it's not where we see ourselves five years from now. It's a long commute for me, all the way across Portland. It's also a neighborhood of nearly identical houses. And we'd like to live in a house that has more architectural history to it. Ultimately, we think that means inner eastside Portland. For now, it means every improvement we make to this house has to be such that it won't drive a potential buyer away. Paints cannot be as bold as we might like, kitchen materials will not be super-high end, and any replacement appliances will be purchased with an eye toward economical reliability.

Permanent or not, it is our house. This is the first real home of our marriage. We committed to each other a few weeks before moving in. After the wedding, we came back here for a small celebration, followed eight days later by a much larger one that spilled out onto the patio. This is our home, and we love it because of that.

We've already made many small adjustments to the house that personalize it: the rose garden, Tibetan-style prayer flags, firepit, and bird feeders on the patio; the Anderson heirloom Chinese antiques scattered through the house; the mixture of Anderson and Milshtein family pictures in the stairway and hall; and all the mutual choices we've made with respect to furnishings and decorations as we've blended our property.

Apart from all this, there is one thing remaining to seal the deal and make this place really ours: our house must have a name. This has been an Anderson tradition going back at least to my grandparents, whose home was always "An-di-fan" (House of Peace), which was their Chinese name when they were missionaries. My parents, who retired to my grandmother's home, have continued to call it An-di-fan, so that's already taken. Besides, we need something that incorporates Amy's moniker--or uses neither of our names, but takes something we share and turns it into a place name.

We've been calling the house "Casa Milderson" on party invitations for awhile now, but "Milderson" really doesn't cut it (sounds too much like a fungal infection) as couplehood designater. Nothing else we've been able to come up with works for us, either. How about you, dear friends and family? Got any ideas? Please share them in a comment, and one of these days, you might just be a guest in the house you named.