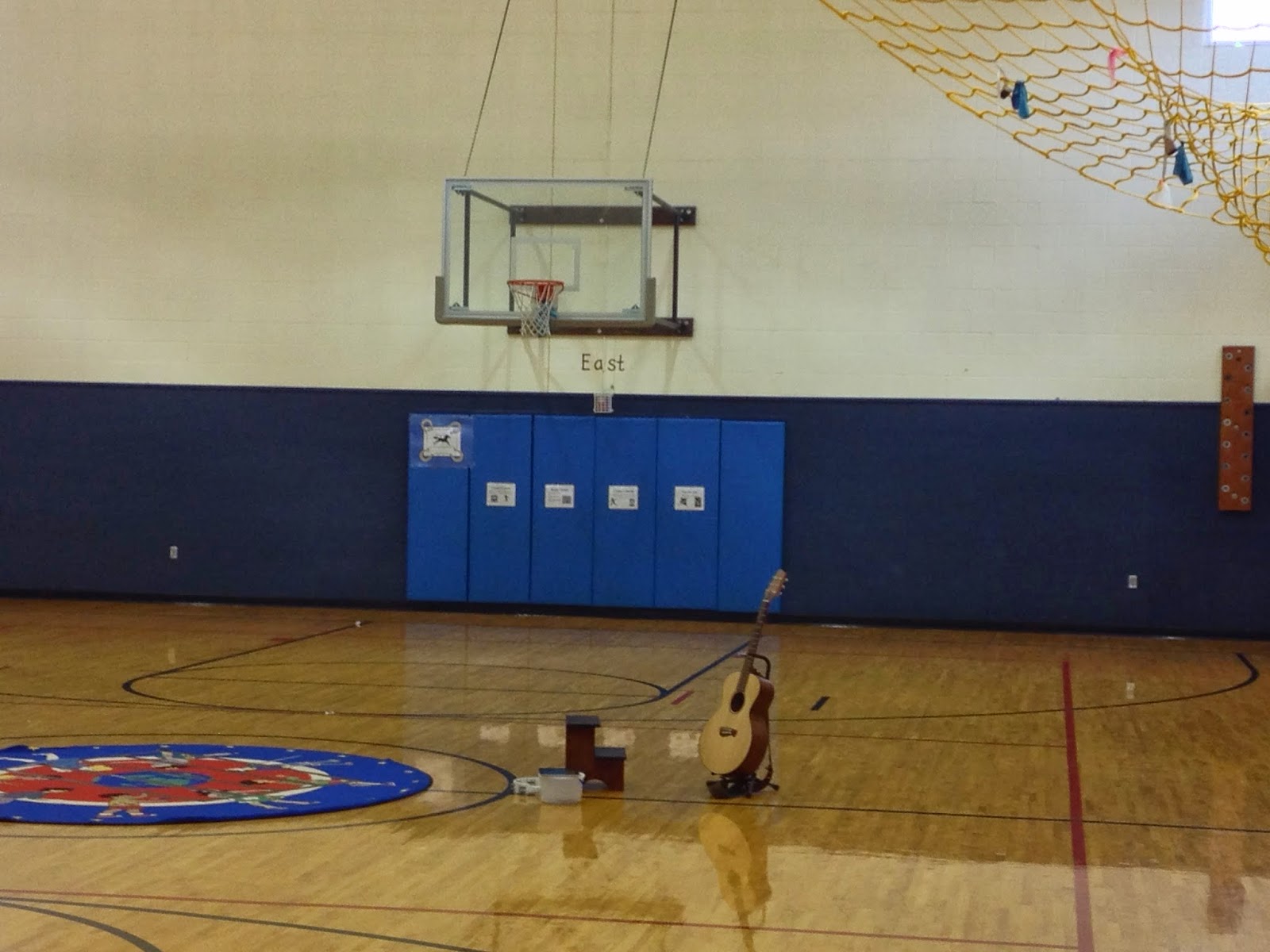 We've established by now that I teach in a gym. I've written a lot about the challenges of teaching music in this space: the horrible acoustics, the psychological urge so many children (especially the small ones) feel in that space to run and slide across the floor, the logistical difficulty of removing anything of value from the room every day at the end of school so that after-school and evening programs don't destroy expensive instruments. I've become inured to most of these problems, so much so that, should I ever find myself back in a normal classroom, a small room dedicated to music with drier acoustics and space for all my equipment, it won't feel like things have been put back to normal; no, much more than that, it'll be like stepping into paradise. I'll be wandering around in a daze for weeks, pinching myself at all the luxuries of teaching in a room like most of my colleagues take for granted.

Apart from all that, I was reminded this week in several ways of just how far music education is going to have to come before it reaches anything like the tenuous importance it had before the recession. For instance:

1) At Margaret Scott, one of the few perks I enjoyed was a video projector that lived in the gym. I used it to great advantage for the recorder curriculum I've developed, and was eager to put that in place at Hartley. Instead, I've been waiting two months for a projector. It's not that I can't do this with a white board and some dry erase markers; prior to this year, that's all I ever used! What rankles is that every other classroom in the school has one of these devices, and every teacher in the district is supposed to have one.

2) It took more than a month to get the keyboard out of storage in the portable that was once the music room (it was immediately taken over by the ELD department when music was cut back, meaning ELD now enjoys two classrooms to my...gym. I wonder why they don't want to teach in there?). I had to wait on every other project the custodian had on his docket. It kept getting bumped back, day after day, week after week, until finally I felt like I was becoming a nuisance to him. I've gotten by, but really: a music class without a piano?

3) Last week one of the first grade teachers asked me if it was okay if several of her students came in several minutes late because the SMART volunteers were reading to them, and couldn't be scheduled at any other time. I replied that this was seriously disruptive to the class, and that those students would have a hard time catching up with what their classmates had already learned unless I just started over when they came in. She said she'd try to reschedule the volunteers; however, later that day I received an email from the principal telling me SMART took priority over music, and I'd just have to live with it.

4) Continuing with the theme of just having to live with it, I lost the gym two mornings this week to activities that no one consulted me about: an assembly and career day. I was simply informed in the weekly schedule that these things would be happening. I was still expected to teach during those times. Fortunately I had lessons planned for those classes that lent themselves well to a portable solution--and, to be honest, it was far more tolerable teaching them in their home rooms than in the gym--but that will not always be the case. A lesson that's heavy on movement, or requires the use of Orff instruments, will just have to be scrapped if I can't have my usual space to teach it.

5) Ten days ago, our early release program time was a presentation by the architect preparing plans for the next bond measure. She talked about demolishing the portables to expand the parking lot and create a true bus lane for students, then adding on four classrooms to one of the wings--which is exactly what will be lost with the portables. Nowhere in the plans was there provision made for a music room.

Every day, I am reminded by students and teachers how much they've missed music, how glad they are to have it back, and how much they love what I'm doing. I hear some of the most ornery fourth and fifth graders practicing their recorders outdoors after school. I have children stop me in the hall to tell me how they sang a song I taught them to their parents. They wave eagerly to me whenever they see me.

And yet, so much was lost in those budget cuts. Losing a classroom is the biggest blow: once a federally mandated program has moved in, something as cuttable as music will not be reclaiming that space. And as much as I am becoming a part of this school's culture, they're used to not having me around. They didn't have me for the first semester. They hardly had any music at all last year. The counselor has been taking up the slack by taking his guitar around the school and singing with classes. In the minds of many, this may be enough. We can live without a music teacher if we have to, they've realized, just as long as we keep our prep time. If his lessons are disrupted by kids drifting in because even the most basic reading program takes priority over music, too bad: we still get our prep time. If he has to pack his lessons in a box and move from room to room to accommodate career day, we're sorry for the inconvenience, but don't mess with our prep time.

The scariest part of this is that it could be worse. I could be completely without a room of my own, having to work in classrooms all the time with whatever I can fit on a cart. Worse still, I could be without this job. And as much as I loved my adolescent students in Banks, it was half time and it wasn't primary. This is the job I belong in.

Knowing, then, that I'm lucky to have a full-time (for me--half-time for each of the schools I'm in) job, luckier still to have a space that is (mostly) my own to do it in, have I any grounds to complain?