It's a museum of medieval art, most of it religious, in a building cobbled together from pieces of ancient European monasteries. And it's located in Manhattan.

I've heard of The Cloisters before, but never understood what people were talking about. When they tried describing the place, I was skeptical: during my two years in Europe, I visited many authentically ancient churches, and church architecture remains one of my interests, even as I have left clergy life behind. When one has been to cathedrals in York, Dublin, Munich, and Rome, to name just a few I visited, even the oldest American churches feel juvenile.

But The Cloisters did not disappoint.

The organizers of this collection of pieces wisely chose specificity over broadness. Tapestries, altar pieces, reliquaries, stained glass, chalices, patens, tombs, prayer books: everything on display came from 12th to 15th century churches. In the paintings and sculptures, one can see European knowledge of the human form evolving toward the photo-realism of the Renaissance. The costumes worn by the subjects of these paintings are delightfully whimsical to modern eyes, suggesting fairy tales, kings and queens and knights in shining armor. The subject matter is often shocking: depictions of torture and martyrdom, dismemberments, and, of course, the wounds of Christ in bloody detail. Many of the pieces contain complex imagery stitched together like a "Where's Waldo" picture book. The presence of patrons in many of the pieces, rewarded for their largess with a blessing from St. Peter or a bird's eye view of the Annunciation, is a reminder that money has always played a role in both religion and art. Then there are the non sequiturs: apes assembling a table, or robbing a traveler of his possessions; an entire room of tapestries depicting a hunt for, and the eventual slaughter of, a unicorn; Bible stories illustrated with characters dressed as 13th century courtiers; an apostle standing at the foot of Mary's deathbed, blowing incense across the room to ease her passing. And, of course, there's the finery: a chalice, depicting the aforementioned seen of the traveler being attacked by apes, wrought in gold and enamel so fine it is hard to imagine how it could have been accomplished with the tools and techniques of a 14th century artisan; pocket psalters illuminated with images so small one almost needs a magnifying glass to appreciate their details.

What delighted me most was the occasional glimpse of how little things have changed in the centuries since these works were created. To illustrate, I give you this stained glass image of the Prodigal Hipster: 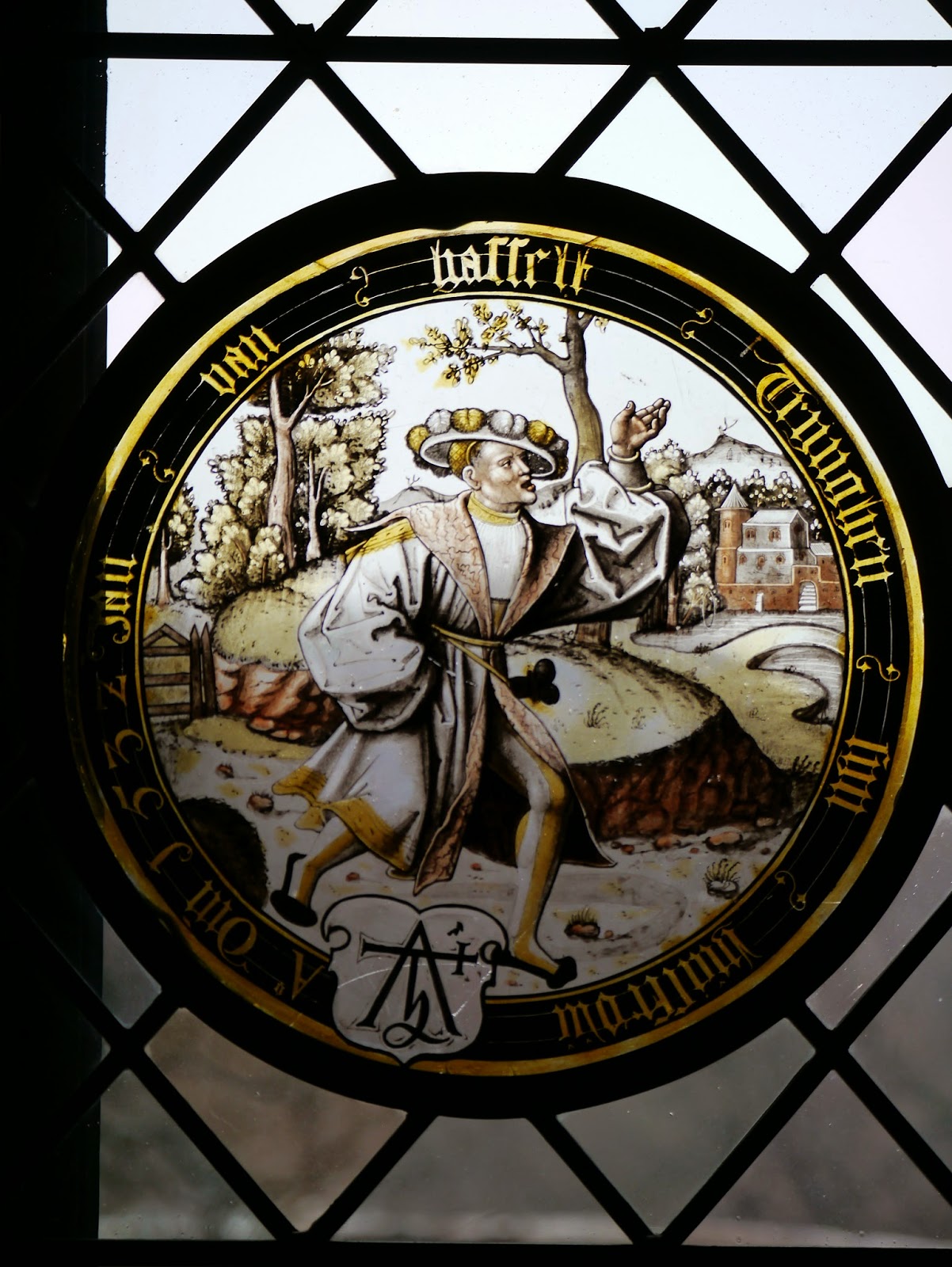 He may be dressed oddly by our standards--but then, isn't that the hallmark of the hipster? Clothing that makes middle-aged adults roll their eyes? The skinny genes, the ironically square glasses, the canvas shoes, the beanie, the tattoos and ear gauges and waxed mustaches and tall bicycles--all of it is there to prove they are who they are, independent of us oldsters. They are hip, living large, making their way in the world despite the brakes we might want to put on them, doing all they can to prove they are not conventional in any way. That is the essence of the story of the prodigal, the young man who demanded his inheritance while his father was still alive, then squandered it in the city before dragging his now starving self back home to seek mercy, and was rewarded instead with a lavish welcome-home feast. This prodigal has just acquired his inheritance, and clearly spent a chunk of it on the latest extravagant fashions before making his way downtown to a gambling den. Soon his money will be gone and, with it, the ridiculous hat and the fine robes and leggings. For now, though, he is utterly filled with confidence and hauteur. He is unbearably young.

Just as we all were, at one time.

So it has always been, so it will ever be. That's the message that keeps coming to me, whether it's working with elementary children, helping parent a 14-year-old, watching a college freshman find his way in Eugene, or reaching out across the miles to my 20-something adult children. Everything these young people experience, I once knew first-hand; and all their quirks, all the things they find exciting or irritating, and all the extreme reactions they have to them, I either remember experiencing or have seen played out by every other young person I have worked with or parented who was going through the same stage in life.

Someday, they will all experience what I am at this time: the gradual loss of vigor, the more prevalent soreness of recovery from exercise, the thinning and graying of hair, the cooling of youthful passion, and the emptying of the nest that brings not so much grief as melancholy.

"I was never that young," I'm tempted to say, looking at the stained glass prodigal hipster, gazing upon these young adults, adolescents, children.

"No," the voice of wisdom reminds me, quoting a movie my middle-aged brain can't remember the title of at this moment, "You were younger."