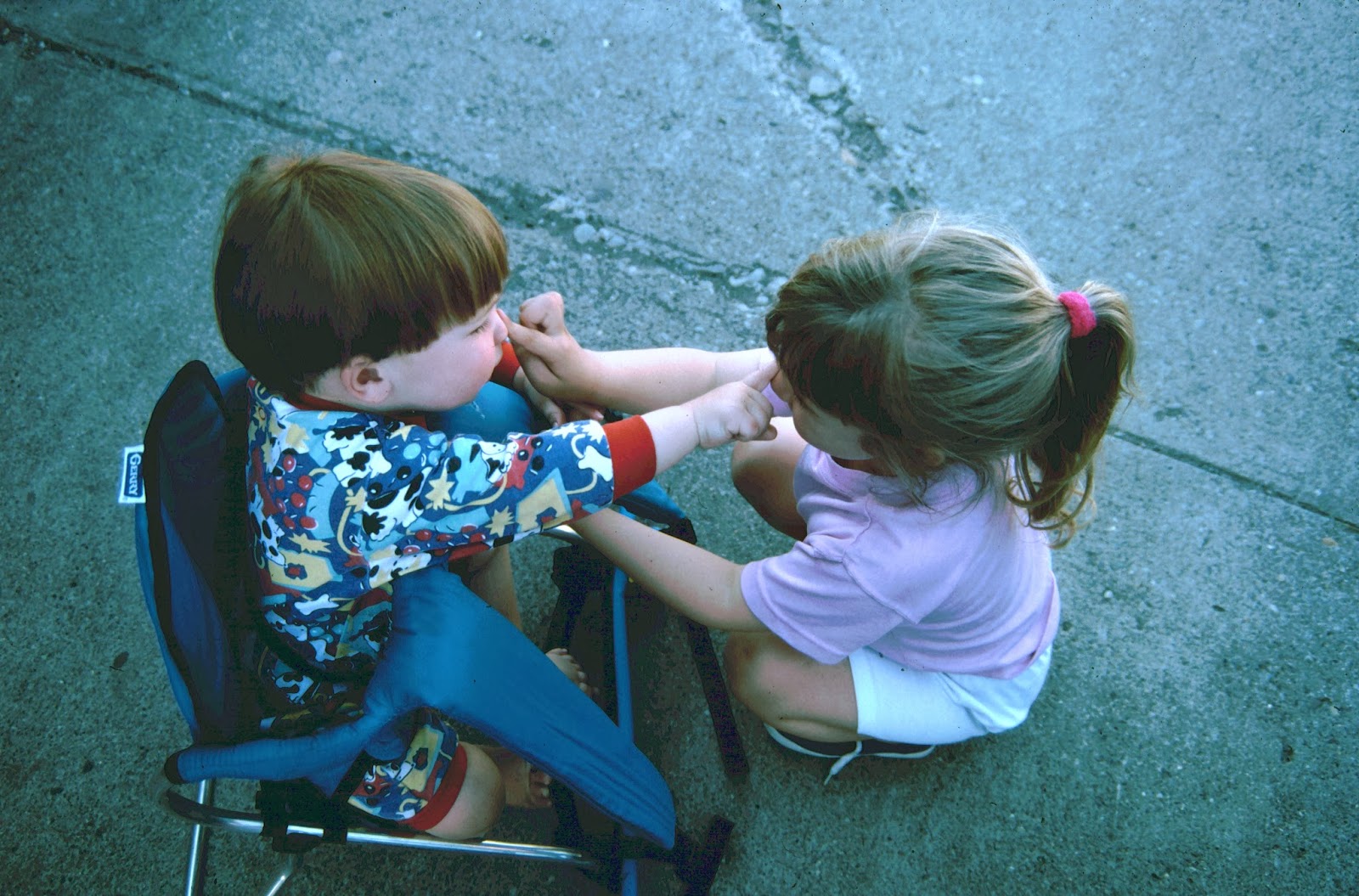 It's been attributed to many luminaries. I associate it most with Montessori and Orff, educators whose philosophy centered on the idea that there is no better way to learn than through play.

Walk through an elementary school anywhere in the United States, and you'll see this philosophy being played out. Children learn math through colorful manipulatives, play word games to improve their reading and writing skills, do puzzles to master facts in science and history. This was not always the case: when Montessori introduced her playful hands-on method, most formal education was lecture and memorization. Teachers were severe, misbehaving children were routinely spanked, and the old cliche of the dunce in the corner could be found in many a classroom.

Harsh methods for a harsh time: children were still seen as resources, employable on farms and in factories, and education was for the privileged. Few graduated from junior high, let alone high school.

Starting with the Victorian Era, things began to change. Childhood began to be seen as a phase of life separate from adulthood, a time for nurture and intellectual development. It was no longer enough to simply teach a boy manners, then hand him on to an apprenticeship as soon as one could be found; and while girls were still taught the necessary skills for child-rearing and housekeeping, they, too, were seen to benefit from learning to read. The founders of the United States viewed free public education as a necessary foundation for the growth of the new nation, though it would be more than a century before their humanistic ideals began to color the methods used in public school classrooms.

There was not much play in any of the classrooms I experienced as a child. Neither New Hampshire nor Idaho was a hotbed for educational innovation, and though the Filer (Idaho) Elementary School had a cutting-edge open design, the potential of those big open rooms was usually defeated by partitions that cut them into normal-sized classrooms--though the noise level from the other classes was such that we had to be even quieter than if we'd been in a traditional school building. We learned by studying books, listening to lectures, and reciting facts until they were memorized.

It came as a shock, then, when, for two years, I experienced Montessori education through a stepchild enrolled in a Montessori preschool. I visited his classroom frequently, and was amazed by the industrious of the children, all of them engaged in hands-on activities--and was told this approach was used throughout the primary grades. There had been little talk of play in my own teacher training, so this was news to me.

I reentered full-time music teaching in 2003 with very little knowledge of elementary methods. I had the canned curriculum already in my classroom: colorful student books, CDs packed with songs coordinated with those books, and a teacher's guide loaded with activities. Many of those activities, sadly, revolved around sitting in chairs, following along in the books, while listening to the CDs. Occasionally, children would be able to get up and move around the room, experiment for all-to-brief a time with some instruments, even play a game; but mostly the curriculum centered on keeping them in the chairs with the books and CDs. That's how I taught for two years.

And then I found Orff.

Carl Orff may not have said anything exactly like "the work of the children is play," but he clearly understood that play is far and away the best way to teach music. Improvisation, dance, games, singing, playing--children in an Orff classroom are never chained to their books; in fact, there are no text books for the Orff approach. In retrospect, it seems to me that much of the impetus for those books in the canned curricula I used was self-perpetuating: if activities didn't revolve around the books, how could the publisher justify selling so many of them? To equip an Orff classroom, one purchases items that will be used to make music and to enhance movement: instruments, scarves, game pieces of one kind or another.

And the children love it. I see this every day: they come into music, see what I have set out for them, and gasp in delight. They can't wait to get their hands on the drums, triangles, xylophones, scarves, Boomwhackers. Every day for the last month, I have had 4th and 5th graders asking me when the recorders will arrive (the answer, finally, is "next week"). They want to play. They may or may not know that this is how they will learn music. They just want to do it.

I remember seeing a photograph of Jean Piaget in my educational psychology textbook "doing what he loved: observing a child." Piaget was a developmental psychologist, a scientist who studied how children become adults. I looked at that photograph and found it endearing, but didn't fully understand it. I raised two children of my own to adolescence, and still didn't get it.

Nine years after being introduced to Carl Orff, I think I finally do.

I finally understand why my kindergartners are so physically busy, why they clump and hug and wrestle and tattle and impulsively do exactly what they've been told not to: they're doing their work. It is the job of a kindergartner to explore the world through play.

I understand why, early in the year, first graders still have some of that kinder business going, but as the year progresses, can learn more abstractly. I understand why second graders can do more complex things, and will listen longer to what I have to say, while retaining much of that innocence and cuddliness. I understand why third graders, really coming into the full blush of kid-ness, are also starting to experiment with social games of affinity and rejection. I understand why fourth graders, more than any other age, begin the year worshiping teachers, though some will, by the end of the year, be already manifesting the sass of early pubescent independence, and why fifth graders can be so difficult. It's all a matter of development: how old they are, what's happening to them hormonally, which parts of their brains are growing new connections.

At every stage, the play figures prominently in what I must do with them to teach effectively. All ages will learn syncopation for better from a playground game like "Old Man Mosey" than from me writing rhythms on a board. Kinders will barely be able to put their hands together; fifth graders will be able to stomp and clap complex rhythms, whether or not they've had prior musical education.

Understanding development made it much easier for me to spend 2011-13 teaching at a junior/senior high school. It makes it much easier for me to handle misbehavior when I can put it in a psychological context, and know that I've seen it before, I'll see it again, and it's completely natural. My job is to help my students channel that hormonal energy in ways that still make learning possible for themselves and their peers.

Finally, when I can see all this in a developmental context, I can enjoy it so much more. Of course the kinders are squirrely when they come in the gym, and want to slide their bottoms on the smooth floor. Of course the older boys want to throw themselves against the wall, jump for the basketball nets. Of course the third grade girls want to clump, hang onto their friends, rather than spread out for a movement activity. Of course I will have to convince the fifth graders that it's okay to move, smile, and even laugh during music, that they don't have to be too cool for school. This is just how they are at this age, and like Jean Piaget, I can observe it and enjoy it, even as I'm doing my best to transcend it with my teaching.

I wish I'd understand all this while I had my own children around. It would've made so much of it so much easier. I could have enjoyed them for who they were, what they were experiencing as they grew, and better helped them understand it for themselves. Most important, I could have played with them more than I did, and found it endlessly fascinating, the laboratory in which they learned how to become themselves, the unique and wonderful individuals they grew to be.

That is the lesson that keeps on teaching, my friends, for the development doesn't stop at eighteen. It never stops. Nor does the play. Last night I went to the gym for a weight-lifting class called Body Pump. Over the course of an hour, I worked every muscle in my body through a series of choreographed routines, all set to popular music. It's hard work and fun all \at once.

The best reward for me, though, is discovering, as I settle into my skin as a music teacher, that play is not just the work of my young students: it's my work, too. And I love it.