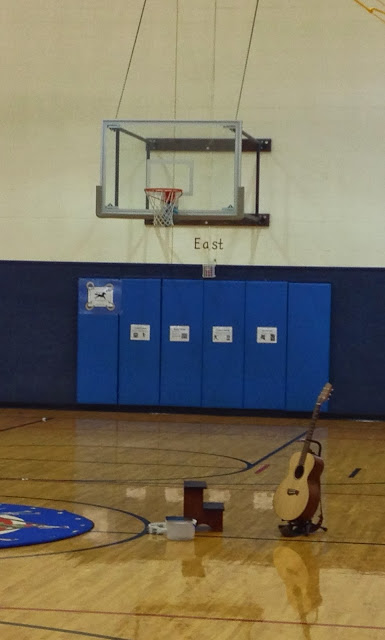 I teach in a gym.

Considering how important movement is to teaching music the Orff way, this space has many advantages. My students can make grand sweeping movements without fear of smacking anyone else in the face. I can teach them line dances, and never worry about someone colliding with a wall. I can separate the gym into two separate spaces, one for movement, the other for instruments. When we do body percussion, the hardwood floor makes a satisfying "smack" whenever students stomp their feet.

And there the advantages end.

The acoustics of a gymnasium cause my impaired ears to overload on a regular basis. I'd say it's like teaching in a barn, except that a barn has natural echo-reduction built into it in the forms of hay and straw. I expect this also contributes to the hyperactivity of some of my students: sensory overload, the stress of hearing so much noise and not being able to understand words. And then there's the temptation to run, screaming, because it is, after all, a gym.

I teach in a gym because the schools where I teach (Margaret Scott until the end of January, then Hartley for the rest of the school year) turned their music rooms into regular classrooms. They didn't have much choice in the matter: student populations increased, but there was no money to expand the school buildings; and it happened at a time when music (and also PE, but that was perfectly at home in the gym) had been eliminated from the curriculum by a budget cut. Now these programs have been restored, but only half-time at each site. The only place I can teach in either building is the gym, and I can do it without fear of interruption by the PE teacher, because she's on the reverse of my schedule.

These schools are lucky to have any music at all. Sure, it's only half a year in each place, and it's in the gym, but in Banks, the district I just left for this one, it is now the fifth year that there has been neither music nor PE in the elementary school; and it seems likely that next year will be the sixth. It's not just the smaller, poorer districts in Oregon that have made these cutbacks: Portland made similar cuts three years ago, and is only now putting back music due to a voter-approved arts tax, and Beaverton is now in its second year of reduced music for elementary schools.

There was a time when such cuts would have been unthinkable. Music was a necessity, not a luxury, for the young child. Music educators were actually in demand. Oregon state law required every child receive a musical education. Public schools, the incubators in which children's physical, emotional, aesthetic, and physical maturation took place, were universally accepted to be the foundation upon which American democracy was built. The very idea of imposing austerity on the education of our children was anathema. All American society took on the responsibility of educating the complete child. This was part of the far larger task of building the commonweal, the great community of which we are all a part. Bring up the youngest members of society with an appreciation of the arts and we all benefit. In the same way, social safety nets ministered to the needs of the less fortunate, those unable to work due to disability or economic downturns. Even the mentally ill were cared for by this sense of community.

Not anymore. Starting with the property tax revolt of the late 1980s, school districts throughout the United States have come under the knife as funding began to dry up. A common complaint was that of the elderly taxpayer who didn't want to finance the education of someone else's children. "Why should I pay for your services?" became, over time, the one-size-fits-all answer to any request for revenue.

And look where it's gotten us: poor school districts, both urban and rural, cutting out every program that makes education enjoyable for students, and helps those students become whole adults, not just automatons who can fill in bubbles on standardized tests; mentally ill homeless people roaming the streets; roads and bridges falling apart with no money available to repair them; public parks, formerly free to all, requiring more and higher user fees, while rangers are laid off; poor people working multiple jobs, forced to leave their children unattended with no affordable day care available, and Head Start programs closing due to the government shutdown: it's as if none of us wants to take responsibility for making the world better for all of us.

That is, in fact, what has happened. Nobody likes to pay taxes, but until very recently, people understood that their taxes existed to make society as a whole a better place. Taxes paid for fire and police departments, roadwork, libraries, museums, public schools, medical research, mental hospitals, parks, and so much more that makes life better for everyone. I might grumble at my tax bill, but when I thought about what it was supporting, I paid it willingly. This is the commonweal: As a citizen, I offer up a portion of my income to create a community, a state, a nation of which I can be proud, even if I never take advantage of some of the services for which I am paying.

In contrast, consider the libertarian America toward which we appear to be heading. Parents pay tuition for their children to attend school, the fire department refuses to save your house until your credit card goes through, everyone pays admission to visit the city park, medical research is reserved for drugs with profit-generating potential, and the poor have nowhere to live but the street--until desperation drives them to crime. The rich get richer, the poor get prison.

Not all of America is descending to this dystopia. Portland, Seattle, San Francisco, New York--there are many cities in which citizens have voted to turn the clock back, to restore funding to programs that have been eliminated for lack of revenue. But even on a city level, this is no way to build the commonweal. If the United States of America is to ever be a great nation on a par with the foreign powers that understand the connection between taxation and the common good, we must return ourselves to a system in which I am happy to have my taxes building infrastructure in Arkansas, tending to patients in Wisconsin, keeping parks open in Utah, and maintaining the arts and physical education for every child, everywhere.

Yes, it's going to sting in the pocket book. But there's no other way. Stepping back from the libertarian nightmare and into the commonweal means raises taxes, and I don't just mean on the wealthy. It means middle class professionals like me will have to pay more.

In the long run, it will be to everyone's financial betterment. Taxes for the commonweal are an investment in our economy. Building infrastructure--and that includes expanding schools so music teachers have their own rooms once more--injects money into the economy, even as improved roads make shipping and travel more efficient. Investing this way, spending collectively on services that benefit the whole community, will ultimately mean higher levels of income for everyone. It's Econ 101.

When this finally gets through the thick heads of the obstacles on Capitol Hill, when they finally let go of the crazy notion that the way out of an economic downturn is to starve the economy even more, then maybe, just maybe, we'll start growing back into a nation we can all be proud of, a place in which the ill are cared for, the poor are housed and fed, and music teachers can finally get their rooms back.