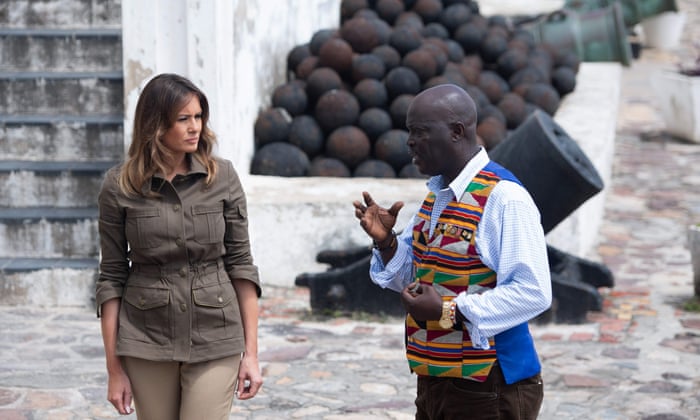 That's all I could think when I read of Melania Trump paying a visit to a slave castle and being moved by what she saw. I've been to that castle, both in 2014 and, again, three months ago as I concluded my second trip to Ghana. It's a shattering experience, seeing the horrific conditions slaves were kept in even before they were crammed into ships for the middle passage. Knowing about the abuse, torture, and murder experienced by untold millions of West Africans ought, if this were a just world, to transform the way we who are descended from the abusers live our lives every day, opening our hearts to the plight of refugees, immigrants, and impoverished people. If we took these lessons seriously, there would be no question but that our borders should be open, our nation generous, and our world utterly interdependent.

Instead, we live in a country whose president makes it a habit to belittle and abuse women and people of color. His policies seek to increase, rather than reverse, the pollution of our air with greenhouse gases; to enhance the bottom line of those who already have far more than they can ever spend while slashing what benefits the poor have left; to turn away intelligent, moral, hard-working refugees and immigrants whose presence in our nation would make it a stronger, richer place; to spurn generations-old relationships with fellow democracies while reaching out in friendship to dictators and mass murderers...and I could go on with this list for pages. But that's not what this essay, which should be shorter than most, is about.

It's about the other Trump, the one who actually went to Africa, a continent of what her husband called "shithole countries."

Melania Trump has been receiving praise for her visit to Elmina, for saying she will never forget what she saw, that it made her very emotional, and she thought more people should see and experience it. I agree with everything she said: touring Elmina is a shattering experience. It's impossible not to be deeply moved by what one sees, hears, and smells in this evil place. The only other experience I can compare to it is visiting a Nazi concentration camp.

For me, both Elmina and Dachau, the camp I visited when I was much younger, put me in touch with something that haunts me: my membership in a race that has, since its emergence on the world stage half a millennium ago, carried out an endless campaign of rape, torture, murder, and exploitation of every place and people we have encountered. I'm speaking of white people who come from western Europe. From the conquistadors to the slavers to the colonizers to the pioneers to the Nazis, we have a legacy of violent conquest that is unmatched by any other classification of humans. If this were a just world, we who are white would spend our lives making reparations to the descendants of all the people whose lives were ruined so that we could enjoy prosperity.

But remorse is not in our nature--at least, nowhere near as deep as entitlement. From the time we set sail to explore a world that was larger than we had previously imagined, we have gone at it with the belief that we had a right to whatever we found, regardless of whether anyone else already owned it. Native peoples already occupy America? Drive them away from the fertile areas, crowd them into reservations, kill them quickly with guns, more slowly with disease and starvation, and never ever give them back the land we took from them. Cheap labor to build a new nation? How about free labor? There are plenty of Africans who can do it for us, and with their darker skin, it's easy to tell they're different; so let's pretend their cattle, and then treat them worse than cattle. Some followers of an ancient religion have built lives of prosperity for themselves despite centuries of persecution? What perfect targets for the resentment we feel over losing an ill-advised war! Let's kill as many of them as we can and make ourselves rich with their property.

It's played out again and again throughout the history of western civilization. Only in the last few decades have some enlightened leaders encouraged their nations to begin making amends: to memorialize victims, pay reparations to their descendants, create laws that seek to prevent future exploitation, and create international alliances that discourage new abuses by member states. Each of these policies is met with anger by those members of the ruling class who would rather not acknowledge guilt, whether individual or collective, and hate the thought of making amends for crimes committed by their ancestors or, in some cases, themselves. A passionate core of these aggrieved abusers is at the heart of the Trump voter base, and he manifests their resentment with every speech, tweet, and policy.

So pardon me, Melania, if I'm not impressed by your show of compassion for the victims of people who, like your husband, cared more for the bottom line than for human beings. I'm considering those words empty because I see no indication at all that you're doing anything to reverse your husband's inhumane, exploitative presidency. Immigrant children are still being held in abominable conditions on the Mexican border. Genocidal dictators are still being coddled, while democratic allies are being spurned. Your husband's policies will make health care and medicine more expensive for the poor so that corporate executives can profit. They will exacerbate climate change, leading to more severe weather patterns that disproportionately endanger the poor in far greater numbers than the rich.

If your trip to Elmina means anything to you, if it really affected you as you claim it did, then your first act upon landing in Washington will be to walk into whatever room your husband is watching Fox News in and give him an ultimatum: start acting like the president of all the people, not just your deplorable base, or we're through.

I don't think you'll do it. Everything I've seen so far tells me your own bottom line matters far more to you than any misgivings you may feel in your heart of hearts over what a horrible man you married. You're in it for the luxury, the limousines, the executive jet, the fine dining and finer clothing, all the trappings of wealth that came with the ring on your finger. I don't buy for a minute that you're genuinely moved by the suffering of people who were forcibly removed from their homes and families, never to see them again, so their descendants could build the house you now live in while their overseers monitored their unpaid labor, ready to strip the skins from their backs should they lag in their efforts or express anything resembling resistance to the undeserved torment they'd been born into.

You could, of course, prove me wrong. I hope you do. I hope this really did mean something to you, that you can say the parallels in the concentration camps for immigrant children your husband has established on our southern border, and that you'll do something about it.