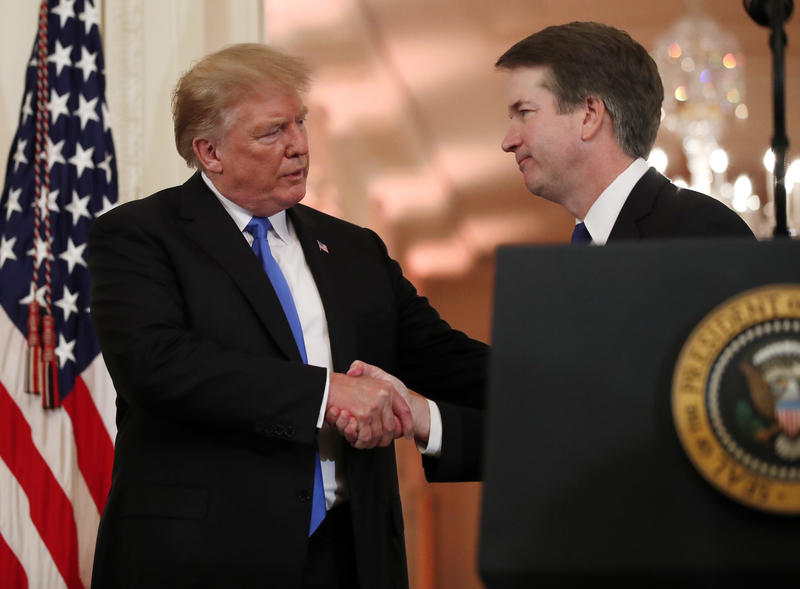 Neither of these men belongs in public office.

Of all the candidates Republican presidents have nominated to the Supreme Court in my lifetime, Brett Kavanaugh is the least qualified. That list includes both Robert Bork, whose nomination was withdrawn once his then-too-extreme opinions became known, and Clarence Thomas, whose more-extreme-than-Bork views were nothing next to the extent of his inappropriate behavior around women. The extent of Kavanaugh's own history of sexual assault and alcohol abuse may never be known, unless the House of Representatives goes Democratic, and a genuinely thorough investigation is launched; but even without a full reckoning of his youthful history of beer-drenched recklessness and aggression, his testimony before the Senate Judiciary Committee should have demonstrated, to any rational, principled legislator, that he has no business joining the court.

Faced with credible accusations of both sexual and alcohol abuse, a qualified candidate would've listened carefully and, given the evidence that he had, during the time in his life when these acts were alleged to have been committed, been such a heavy drinker that his memory of those acts would be, at best, obscured, responded in humility that he really could not remember clearly whether he'd done such things or not. He would've gone on from there to acknowledge that molesting women in the ways described by his accusers was wrong and, even if technically legal at the time, should have carried grave consequences for all involved. He would also have expressed his regret for what had happened to the victims, whether or not he had been personally involved (and again, given the extent of his drinking at the time, it may well be impossible for him to remember accurately or at all what he was doing on the nights in question). Finally, he would have encouraged a full investigation, one that could establish with far more certainty what actually happened; and if it proved his memory to be faulty, and that he was, in fact, guilty of sexual assault, he would have accepted, with fear and trembling, whatever consequences came with that guilt.

Instead, he came at the committee like an aggrieved victim, furious that anyone would even consider his youthful hijinks to deserve any attention at all. Boys will be boys, he insisted, but even so, I didn't do anything to the extent that the incriminating calendar I have with me, or the notations in my high school yearbook, suggest I actually did. All the euphemisms for excessive drinking and taking advantage of intoxicated women mean something other than what they are generally acknowledged to mean. And yes, I do like beer, but what's wrong with that? Sure, maybe I was tipsy a few times, but not to the point of being unable to remember I never did anything that could have hurt the feelings of a woman, let alone scar her for decades. And how dare you suggest I don't deserve a seat on the Supreme Court, considering I went to Yale?

It was an appalling display that should have been disqualifying all by itself. Between Kavanaugh's  opening statement and his responses to questions from the committee, he almost certainly perjured himself multiple times. The naked partisanship of his fury at the Democratic party calls into question whether he can fairly conduct himself in his current position on the second-most-important court in the United States, and his dissembling over the meanings of notations in his yearbook and calendar would call to mind the slippery legal gymnastics of Bill Clinton's Lewinsky testimony if they weren't so obviously, ineptly false.

Far worse than the unfitness on display, though, was the naked calculation behind it. Kavanaugh was not speaking to anyone on the Judiciary Committee; nor was he aiming for an audience of one, as has been suggested, though his mendacity and passion certainly went over well with the president. His much larger audience was the pack of dogs who respond to every whistle that comes from the White House: the rabid core of Republican voters who are white, male, and perpetually furious over the efforts of any other segment of the American populace to make any progress at all. You know what it's like, Kavanaugh was saying to them, when a woman responds to your appreciative remarks by calling them harassment, or when she rejects your advances and calls them assault, or when she gets the promotion you had coming because you're a man and she's not. You know how it feels when your cherished boyhood memories of exploring the wonders of sex and alcohol are called into question. Doesn't it make you furious? Doesn't it make you want to come out and vote for senators who stand by me, a guy just like you, or stay home on election day for senators who don't? Kavanaugh went over the heads of the Republican senators to their employers: not Donald Trump, but the deplorables who elected him.

And it worked. Even retiring Senator Jeff Flake, who has nothing to lose, is likely to vote for him, as is Democratic Senator Joe Manchin, who has everything to lose, and Republican "moderate" Susan Collins, who could well lose her seat in 2020 over this vote. Flake did insist on additional investigation, but what the White House authorized was so cursory that it could neither prove nor disprove any of the allegations, let alone bring to light the extent of Kavanaugh's alcohol abuse.

So the Supreme Court will add another justice with an asterisk, bringing to three the number who should never have been appointed. (My list includes Clarence Thomas, who benefited from an all-male committee that badly mistreated his accusers; and Neil Gorsuch, whose seat would've gone to an Obama appointee, but for Mitch McConnell's abuse of senate rules).

And I'm not at all surprised. We're not living in rationale times, after all. We have a president elected despite allegations far more recent and extensive than those leveled against Kavanaugh, who has plainly used the office to line his own pockets, while appointing a cabinet of similarly corrupt and inept cronies. The more we know about Trump, the plainer his unfitness for the job is. It's as if we don't have a president so much as a rolling scandal that damages or destroys everything good and right about our nation.

Then there's the Congress that bows to his bidding because without those deplorable base voters for whom he can do no wrong, most of them would lose their own elections. Speaker Paul Ryan, with just one of his Randian goals (the painfully lopsided tax cut for the rich) in place, has chosen retirement over facing voters again and, whatever the result for his own seat, almost certainly losing the speakership. And Senate Majority Leader Mitch McConnell, Mitch "winning isn't everything, it's the only thing," "power is my only aphrodisiac," "norms only apply to Democrats" McConnell knows his days are numbered. He will be lucky to hold onto his one-vote majority next month, and even if he does, he loss of the House means his agenda will be dead in the water.

Except, that is, for being able to rush through another unfit, unqualified, morally and ethically compromised Supreme Court justice should the unthinkable happen, and another liberal vacancy occur.

We live in extraordinary times. Norms and rules that have governed our nation for generations are being whittled down and discarded. The Oval Office is occupied by a man who is not just the worst president we've ever had: he's one of the worst people in America. And that's exactly why his core voters elected him. Republicans are no longer a political party: they're a beer-drenched, sex-assaulting, furniture-breaking, puke-bucket gang-rape frat party. We've put up with them for far too long, but it will take far more than our reasonable complaints to evict them from the neighborhood.

It will take votes. Lots of them. It will take getting the far more sensible and progressive, but far less engaged than their conservative grandparents, youth of the millennial generation to the polls. It will take the nursing and encouragement of ancient outrage on the part of women of every class, color, and ethnicity and, again, getting them to the polls. And it will take the continued whittling away, one voter at a time, of Trump's base. There are plenty of Americans out there who believe Brett Kavanaugh should never even have been nominated, far more than enough to put a stop to the shit show in Washington; they just have to want to stop it.

And if they don't? Then maybe, like Brett Kavanuagh and Donald Trump, America has disqualified itself from being able to call itself a democracy.
Labels: Brett Kavanaugh Donald Trump Republican Party Supreme Court voters
Location: Portland, OR 97229, USA