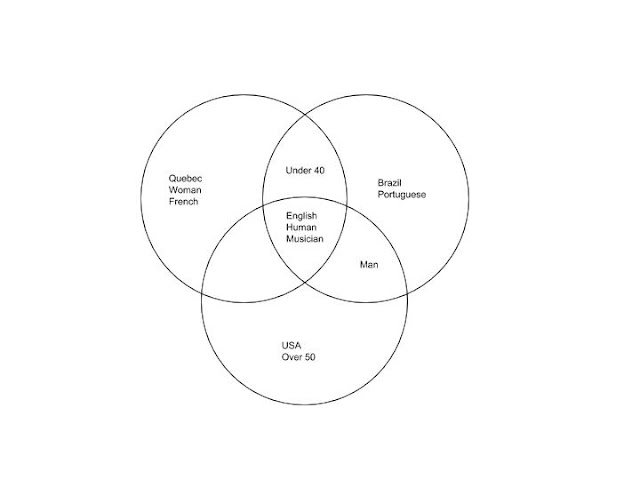 When you stop to think about it, I really should've had a much harder time communicating.

Instead, I never had a problem, whether I was in Scotland, Belgium, Holland, Dubai, or Ghana. Everywhere I went, people spoke not just English, but American English. And yes, that includes Great Britain, ostensible birthplace of the language that, thanks to the outsized influence of American culture, has become the global lingua franca.

So in Scottish pubs and shops where we sometimes had to ask people to repeat themselves so we could understand what they were saying, we never had a problem ordering food or drinks, asking where the restroom was, getting directions to a landmark, or anything else. In Belgium, even a gruff waiter whose ability to speak English was so limited he could only point to items on the menu still had no trouble understanding what I was asking him. In Amsterdam, I encountered a bartender whose English was so perfectly American-accented I was astonished when he turned to another customer and reverted to Dutch. On my Air Emirates flights into and out of Dubai, every flight attendant was fluent in my form of English. And in Ghana, I had no problem at all talking not just with Ghanaians, but with the many other nationalities present at the music festival I was attending.

What really brought the universality of American English home to me, though, was the night I stayed up until 1:30 a.m. having a conversation with two other musicians, one from Montreal, the other from Sao Paolo. The Venn diagram at the top of this post is a cursory representation of characteristics, commonalities, and differences. We talked about many things as we sat outside in the courtyard of the White Dove Hotel, sipping Ghanaian lager, and only occasionally did we encounter a translation issue--usually involving the Brazilian and the Quebecois searching for a cognate in French or Portuguese--because the entire conversation was in American English. All of it. It was the one language we had in common.

Now, to be fair, I should acknowledge that we were all global musicians: the Quebecois was part of an all-woman South African gumboot troupe; the Brazilian was a practitioner of the group vocal improvisation practice, pioneered by American vocalist Bobby McFerrin, called circle singing; and as an Orff-trained music educator, I'm steeped in music and movement practices from cultures around the world. So it could be said that we were all capable of communicating musically with each other, and in fact, we had all been part of an improvisational vocal/body music jam prior to sitting down for this conversation. But really, the experience we were having well past our bedtimes would not have been possible without the shared spoken language of American English.

Thinking about this as the conversation took place, and ever since then, in retrospect, I've found myself feeling a variety of things: wonder that my native culture could be a universal translator, enabling us to connect across so many other barriers; gratitude that it was, in fact, possible to be talking for so many hours as if we were college students up on a Friday night, swapping ideas over beers; and embarrassment at how American egotism has forced the world to adapt itself to us, rather than the other way around.

That last thought needs some explaining. I'll start with an observation I first made in the weeks after Al Qaeda terrorists crashed jet planes into the World Trade Center and the Pentagon on September 11, 2001. I was sitting in a movie theater, watching previews, when a long Pepsi ad came on. You may remember this one: it featured Britney Spears, only recently graduated from her squeaky clean Mickey Mouse Club years, thrusting her hips and bare midriff while assorted Americans, watching the spectacle on TV either (in the case of some female bowlers) rooted for her or (in the case of a hamburger-flipping fast food cook and retired Senator Bob Dole) drooled over her sexy antics. I saw that ad, thought about the image of America it projected, extrapolated it to the global reach of American advertising, and immediately had an answer to the question so many people were asking then, "Why do they hate us?" To people of a modest culture that prefers to keep sexuality under cover, that ad must have come across as not just an affront, but a threat: if something wasn't done, there would be young women everywhere emulating Britney Spears's revealing outfit and hypersexual dance moves.

This was not, however, a new observation for me: as a young pastor in England in the late 1980s, I was already aware of how ubiquitous American commercial culture was becoming. Traveling throughout Britain and, for a few days, in mainland Europe, I saw American fast food logos everywhere: McDonalds, Pizza Hut, KFC. American movies were in all the theaters, American shows were a big part of British TV schedules, and American brands could be found in grocery and variety stores. At the same time, though, I wasn't always able to make myself understood: American English had not yet become the universal language it is today.

Even so, I was already saddened by the aspects of American culture that were then just beginning to conquer Europe. We don't, to borrow from our embarrassing president, send our best stuff overseas. The movies not just Europeans, but Asians, Africans, and everybody else is lining up to watch are tentpole franchises: lots of action, explosions, bright colors, things that appeal to twelve-year-old boys no matter what language they speak. They're also drinking our soda pop, eating our fast food, and dressing like our pop divas.

So the American culture that's reshaping the world is anything but high-brow--but it's also impossible to ignore. It's an apt projection of American identity: we are who we are, and we're loud and assertive about it. We don't learn the languages of others, and when we find they can't understand us, we just keep saying what we want, louder and slower, as if they're hard of hearing. We expect them to do all the translating, to understand we mean "water closet," "washroom," "lavatory," "loo," or even "toilet" when we say "bathroom"; to translate temperatures into Fahrenheit for us; to translate distances into miles; to translate whatever they're saying into not just English, but American English.

If you've met me, you know why I find this embarrassing. I'm a shy person, and I prefer to make allowances for others, rather than they other way around. In Britain, I asked directions to the loo. In adjusting to the weather, I did my own temperature calculations (because I'm still not sure where my comfort zone is in Celsius, but I'm not going to make someone else multiply by 9/5 then add 32 when I can do it myself). When it came to language, though, I just had to accept the reality that I'm monolingual. Yes, if I was in Spain, I could probably ask for a number of things in Spanish, but unless the person I was talking to spoke very slowly and distinctly, I'd still need the reply translated for me.

Which leads me to the conclusion that, for better or for worse, the world's lingua franca just happens to be the language I was lucky enough to be born into. Perhaps rather than grumbling about the unfairness of it to the rest of the world, I should just be grateful I'm not like the Ghanaian woman in my seat row flying to Accra who could not make herself understood in any of the fifteen languages spoken by the Air Emirates flight crew. No, I'm one of the lucky ones: when I ask about how to operate the entertainment system, they know exactly what I'm saying.
American culture Babel fish lingua franca universal translator
Location: Portland, OR 97229, USA