Dispatches from Ghana I: Old Roots 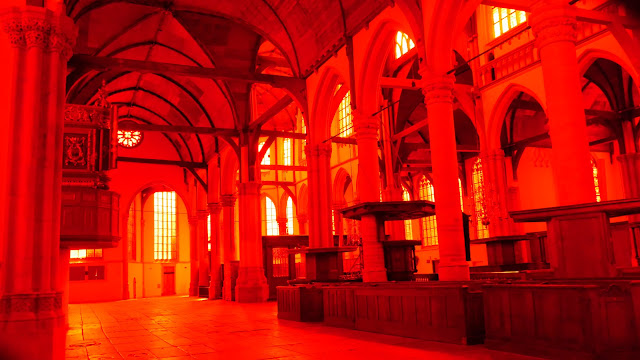 No, there's nothing wrong with my camera.

I begin this travel blog entry not with where I am as I write (my room in the White Dove Hotel in Dzodze, Volta Region, Ghana), but where I was a week ago: the low country of western Europe.

When I began to imagine what this trip would be like, there were two long adventures anchoring it: ten days exploring Britain with Amy, and ten days attending the International Body Music Festival in Ghana. Between those two large adventures, I needed something smaller to cover the time between Amy's departure from London and my flight to Accra. Shopping for airfares, I landed on Emirates. There were plenty of options for my point of departure from Europe. I chose Amsterdam, a city I've never visited before, thinking I might stay with a friend from my previous Ghana experience. I contacted him, and learned he'd be out of town, so now my thoughts shifted to a different kind of adventure: visiting Belgian breweries to drink my favorite beer at the source, then traveling to Amsterdam for my flight. I booked a high-speed train to Brussels, set up Air BnBs in Brussels, Antwerp, and finally Amsterdam, and pushed the whole thing to the back of my mind.

Jump ahead a few months, and after a tearful goodbye to the best traveling companion I've ever had, I was on my way to London's St. Pancras rail station. In Brussels, I checked into my room a block from the central station, then began exploring. The layout of Brussels is very much as it has been since the middle ages: streets that wind in odd directions, intersections of six or more of them, huge plazas that open up without warning. The architecture dates from the Renaissance, featuring some of the crazy sky-scraping spires that were in vogue then, doing their best to poke God in the tuchus. Were I thirty years younger, I would've been on an architectural adventure, walking around the Gothic cathedrals and guild halls, marveling at the ornate decoration within. But I was not in Brussels for the architecture (though I certainly took enough pictures of it): I was on a beer quest.

The beer did not disappoint. I sampled Belgian brews at several different pubs, dining at one that was airing the World Cup elimination match between Belgium an Japan. I cheered with the Belgians as their team miraculously scored in the last moments of the game, breaking a tie and moving on to the quarter finals. The Belgians I was sharing a table with smiled and gave me a thumbs-up. I have no idea whether they spoke any English (though, considering I never once had to struggle to explain myself to any of the bartenders, waiters, shopkeepers, Air BnB hosts, train station attendants, et cetera, they probably spoke it flawlessly), or knew I was an American (again, I probably give off plenty of American vibes I'm not even aware of, but that a European can pick up in an instant); they were just happy that I was happy that they were happy...

As was the entire city of Brussels. Making my way back to my room, I saw some of the most reckless driving I've ever witnessed: young men (I didn't see a single female driver doing this) roaring around the town, screeching around corners, blasting their horns, as their buddies literally hung out the windows of their cars, some so far I worried they'd fall out. I heard a few sirens on the way home, so it's possible my fears for these victory-crazed young people came true. I settled in for the night wondering if I'd be kept awake by the partying, but the noise seemed to abate by midnight.

The next day, I did some more exploring, tasting the world's most authentically made lambic at a family-owned brewery that has been using the same equipment since the 1800s. The tour here was self-guided, and throughout the brewery was filled with the aroma of aging barrels being steam-cleaned. The lambics I tasted at the end were more an experience than a pleasure, but I had the whole city to make up for that. I had lunch at yet another pub, and caught a train to Antwerp.

Antwerp disappointed me, especially on the first night I was there. I did a brewery tour here that could've been an Epcot ride. The city is far more modern than Brussels, leading me to believe it suffered mightily in World War II. The next morning, I set off to explore the old part of the downtown, including the grand marketplace, and found it far more interesting--though still notably lacking in good breweries. I again caught an afternoon train, this time to Amsterdam.

I can't say I fell in love with Amsterdam immediately, because I was in a high-stress situation to get to my Air BnB by 5:00 pm, and an engine breakdown meant that I arrived at the station with little time to spare. My host's house was just over a mile from the station, and I simply could not get either of my phone's map applications to provide me with good bus schedules, so I set off on foot, rolling my enormous suitcase and with a fully-packed knapsack on my back--and promptly wound up going the wrong direction down a canal. The direction of the afternoon sunlight clued me in to my error, and I arrived at the house with just minutes to spare. That evening--and it was a lovely long evening, with the northern summer sun not setting until after 10--I finally had a chance to explore the canals, finding the best beer bar I've been to, serving only Dutch beers, every one of which was a delight. (Again, the bartender, whose recommendations were all excellent, spoke flawless, American-accented English.)

The next morning, it was back to exploring, and this time I set out to see the insides of some of those old churches that would've been my primary interest when I was in my late 20s and studying theology. Much to my surprise, the three churches I entered had all been repurposed. The Old Church is now an art museum--though the current installation is the interior of the church itself with all the windows covered in red plastic. The picture at the top of this post gives you an idea what that looks like. It's an eerie sensation, walking around a formerly sacred place that now looks like a scene from Rosemary's Baby. As I explored the nave, the off-balance feeling began to inform my chronic dread about where the world seems to be headed as democracies continue to choose xenophobic despots to be their leaders. It's as if all we once valued must be purged with fire and blood before we can reclaim whatever part of it is left.

I went from the Old Church to the New Church, and again, it had been repurposed into a gallery. Here I found an exhibition of prize-winning photojournalism from the last year--most of it of the horrors human beings have been visiting upon each other throughout the world. Reading the descriptions of these images of human suffering, of the indignities forced upon unwanted ethnic groups and immigrants, I had a sensation not unlike what I felt when, on my first (and, up to now, only) trip to mainland Europe, almost thirty years ago, and visited the memorial at the Dachau concentration camp outside Munich: horror that people could be so ruthless and cruel to other people based on an arbitrary criterion, coupled with the sick realization that it continues to happen, and will go on happening for the foreseeable future.

I visited one more church, a former cathedral now the home of an evangelical congregation, a good fit in a building that the Puritan reformers purged of all its Catholic finery and stained glass. Where there were once pews, there are now stackable chairs. This church neighbors the Anne Frank house, and I wondered if the Dutch family that sheltered the Franks from the Nazis once attended it.

Soon it was time to collect my luggage from the Air BnB and take a train to the airport. I arrived there with much more than enough time to spare. The journey from there to Ghana, and my experiences in this ancient, but far less developed, place will be covered in future dispatches.

For now, I will close with a few observations from my days in the lowlands:

Europeans continue to be far more likely to smoke than Americans. On a warm day (and all my days there were warm), sidewalk cafes are populated with smokes taking advantage of the ashtray on every outdoor table; meanwhile, the non-smoking interior of the restaurant is sparsely populated. I considered eating inside for some of the meals I had there, and did for one, but concluded in the end that, if I was going to experience lowland culture, I needed to be out where the people were. And then something unexpected happened: I found I didn't mind the whiffs of tobacco smoke that drifted across my table. In fact, it seemed wholly appropriate, part of the fragrance of these ancient cities. Mind you, I would've hated to be inside any of those restaurants in the era before smoking was pushed out to the street, but out there on the sidewalk, it wasn't bad. I even kind of liked having them out there with me.

I wonder how long there will continue to be Christians in Europe. Of the churches I visited in Amsterdam, only one, a Catholic church, appeared to have any kind of thriving congregation. That the national church of Holland has given up two spectacular cruciform Gothic buildings entirely, and given over a third to an evangelical congregation, tells me there are not many mainline Protestants remaining in that country.

And finally: I quickly came to delight in Brussels, city of winding streets, abuzz with nightlife, but also a city that caters almost excessively to tourists, with waffle shops on every block. For all that, the city retains its vibrant identity. Antwerp did not appeal to me: what remains of the old city has been transformed into an enormous outdoor shopping mall, with posh shops on every block. But Amsterdam: yes, there are tourists everywhere, but I didn't spend that much time in the touristy part of the city center. The canal district, with its Dr. Seuss-like tipping houses stacked up against each other, its surfeit of geranium-bedecked bridges, its sidewalk cafes, and everywhere, friendly, helpful, English-speaking Netherlanders--this is what won my heart. I will have to come back to this city someday when Amy can join me.

Signing off for now,