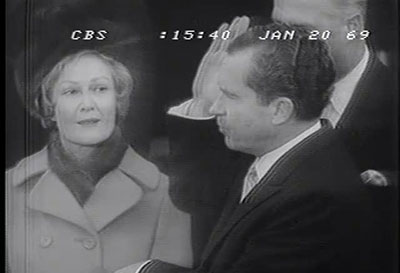 I do solemnly swear (or affirm) that I will support and defend the Constitution of the United States against all enemies, foreign and domestic; that I will bear true faith and allegiance to the same; that I take this obligation freely, without any mental reservation or purpose of evasion; and that I will well and faithfully discharge the duties of the office on which I am about to enter: So help me God. --Oath of Office for all U.S. Senators and Members of Congress prescribed in the United States Code, Title 5, Section 3331.

They all take an oath.

It's a very American approach to government service: while our elected officials are not required to profess belief in any religion (though admitting disbelief is still considering an electoral third rail), they are required to believe in the Constitution; and, more than believing in it, to protect it. This obligation reaches far beyond Capitol Hill: Article VI includes all officers of the executive and judicial branches, not to mention state legislators.

So this is serious business. Our identity as a nation is inextricably bound up with this founding document and the rights it enshrines. It's a defining characteristic of American democracy, distinguishing it from Old World republics grounded in tradition rather than a Constitution. As much as evangelicals may want to claim that the United States was founded as a Christian nation, grounded in the Bible, it is really the Constitution that is the one holy book binding us all together--a document that explicitly forbids the nation from subjecting elected officials to any kind of religious test.

Unfortunately, as anyone who has spent any time at all being part of an actual religious community can tell you, the one thing that really unites all religions is hypocrisy. And anyone who studies American government can apply that same truth to the individuals taking either of the oaths of office with which I began this essay.

Republican hypocrisy burst on the scene before the House of Representatives was even seated for its new term, as a House organizing committee moved to defang an independent Congressional ethics commission. The rule change was met with a flood of protests by constituents, culminating in a tweet from the Hypocrite-in-Chief questioning its timing, and was quickly withdrawn. The message was clear, though: expecting Congresspersons to put the best interests of the nation ahead of their own ambition is folly.

That doesn't mean we should all just lie down and admit the oath of office is a fantasy, or that taking it is simply a formality. Consider another sphere of American government in which oath-taking is essential: the judicial system. When witnesses appear in court, their first task is to take an oath. Should they later be found to have violated that oath by lying on the witness stand, they are subject to penalties, including imprisonment.

The significance of this language triggered something for me just now, as I remembered that in Britain, since the days of Henry VIII, one of the monarch's titles has been Defender of the Faith. That American officials--not just the President, but all officials, whether elected or appointed--are considered Defenders of the Constitution underlines the assertion that Constitutional Democracy is the True American Religion.

As defenders of the Constitution, these officials are expected to hold up everything they do against this standard. To the extent that an official's actions violate the Constitution, whether by endangering the rights of citizens, coming under the influence of a foreign entity, or whatever other act of power-mongering, self-aggrandizement, or human rights violation may be committed, that official has not just committed hypocrisy, but heresy.

This sheds a different light on the campaign promises of the President-elect. When Donald Trump spoke of stripping Muslim-Americans of their rights to due process, he blasphemed. When he refused to release his taxes, he rejected the financial transparency that is essential to proving himself not under the influence of a foreign power.

The Republicans running Congress are just as guilty as Trump is of committing mortal sins against American democracy. Stonewalling President Obama's Supreme Court nomination, rushing ahead to repeal a health care law that covers tens of millions of their own constituents, pushing through safety net and tax "reforms" that will weaken support for the vast majority of Americans while lining the pockets of the already well-to-do--the GOP Congressional agenda is rife with policies that will, if not explicitly violating the letter of the Constitution, trample on its spirit. And because they've achieved that rarity of a unified partisan government, they can expect that, once this radical legislation passes both houses, it will not only be signed into law by the new President, but ratified by a conservative Supreme Court.

I used to be a United Methodist minister. While it's been years since I put on the robes of that office, I still feel the need to honor places of worship when I enter them: to change the tone of my voice, the content of my conversation, and to avoid in any way making light of what goes on in a sanctuary. I have always felt the same way about legislative chambers. These are holy places, places in which the spirit of democracy is made manifest through debate and parliamentary procedure, in which the will of the American people is carried out by their elected representatives.

Bit by bit, I've been feeling for several years now that these chambers are being blasphemed. To the extent that American government worked, it was that the people we elected believed in the Constitution, and while they might not always agree on its interpretation, they were at least sincere in their desire to fulfill their oaths to protect and defend it. When the occasional heretic violated that trust, Congress acted to impeach, censure, even expel the culprit.

No more. There are now powerful persons in Congress and, soon, in the White House whose attitude toward the Constitution is callous at best. Donald Trump cares nothing for the protections of the Bill of Rights. Mitch McConnell and Paul Ryan will do little, if anything, to stop him as he runs rampant over those protections.

The one sliver of hope I perceive comes from last week's reversal of the House's bald-faced attempt to dispense with an ethics watchdog: what these politicians care most about is not the principles of conservatism, not the upholding of their oaths, but their jobs. Make enough phone calls, send enough letters, raise enough of a fuss, and they have to take notice. At least for now, this is still a democracy.