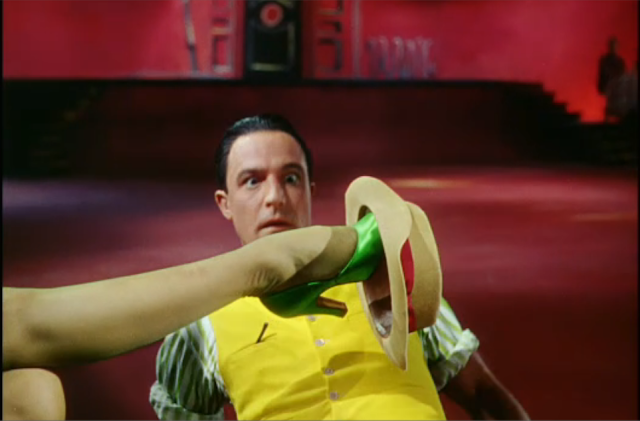 Yeah--I didn't see that coming, either.

A drum circle got me into Orff. The dancing part didn't happen until I had my Level I training, and even then, I was far from comfortable with it. But I pushed through my discomfort, and began seriously incorporating movement into my classroom. Many more workshops, two more Levels, a Jazz Class, and my first national conference later, I can seriously say--finally, at the age of 52--I love to dance!

Few people who've known me outside of the Orff world would believe this about me. Yes, I took a full year of ballroom dance when I was in grad school, and it has informed my playing of any music that swings ever since; but I had few opportunities to practice those moves, and over time, they atrophied. I can still do some basic swing and Charleston steps, but anything else I have to make up as I go.

Prior to that year, it wasn't just that I didn't have dance skills. I hated dancing. I especially hated party dancing of the kind that is so essential to adolescence. I never outgrew the awkward wallflower stage. I had a big body, long arms, uncertain balance, and I just didn't know what to do with myself at school or other age-specific dances. I did like to slow dance, partly for the nerd-without-a-girlfriend reason, but also because the demands on my choreographic skills were far less than for anything with a lively beat. Remember, too, that I grew up in the Disco era, when there were clearly prescribed moves for the dance floor--moves I never bothered to learn because, I kept telling myself, I hated to dance.

I continued with that awkwardness all through my young adult years. If I did get out on a dance floor, I'd do the Charleston rather than anything that fit that harsh '80s backbeat. By the '90s, I was no longer socializing with people my own age--being a minister, especially of a rural church, does not encourage such behavior--so I missed many opportunities to learn.

The piece I was missing in all this was the improvisational component of dancing to a rock beat. I was learning to be quite the improviser on the piano, writing complicated songs with my guitar, and in the pulpit, improvising entire sermons based on a single suggestion; but somehow I never realized I could channel that same creativity into movement.

And then came Orff; and finally, last night, at the closing dance (which featured an awesome cover band called the Nacho Men), in the company of hundreds of fellow Orff teachers, I cut loose and let my freak flag fly. There were some couples dancing, but for the most part, it was all of us, dancing with all the rest of us, doing our own thing but completely in sync with the people around us. It was magnificent, crazy, hilarious, the perfect people with whom to let myself go. And I loved every minute of it.

Honestly, this is not that new a development: I've been dancing with my students for years, and loving it. What's evolved through these gatherings is my willingness to cut loose in the company of my peers. That's the true mark of freedom: I no longer worry about what others will think about me for doing what I'm doing. I've stopped prejudging myself through their eyes, and have just let myself be myself.

So there it is, those of you who knew me in high school and college: stodgy, shy, wallflower Mark loves to dance. You may now clean up the coffee that just spewed from your mouth in a colossal spit take over the very idea of me becoming a dancing fool, and resume your normal, non-blog-related activities.
dance Orff Schulwerk Rocky Mountain Rendezvous
Location: Denver, CO, USA