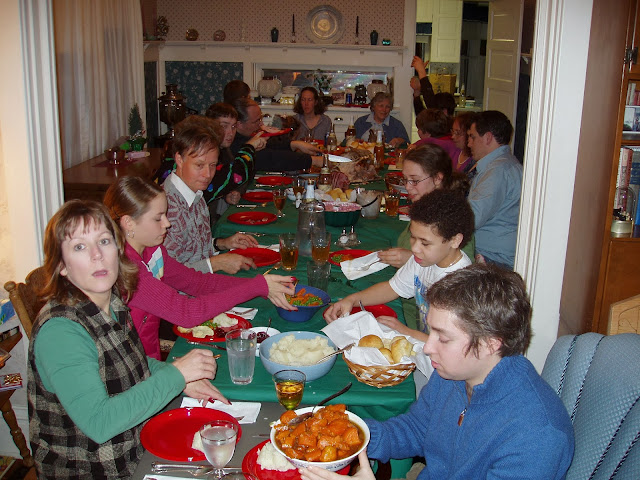 Thanksgiving? Christmas? 2000-something? Or maybe late 1990s? I'm not sure. It's the only Anderson family dinner shot I have on my computer. From the size of my own kids, and the absence of James and Gail's kids from the table, I think it's probably somewhere around 2000 or 2001. The large bowl of candied yams is a sure sign it's one of the two turkey holidays, though the use of plastic plates makes me think it's probably Christmas. The china has traditionally come out for Thanksgiving, but Christmas is an anything-goes meal as far as dinnerware.
I was thinking all day yesterday of doing a photo essay about the giant meals we have on those two holidays. It's a tradition that probably goes back to 1991, the first holiday that my parents were well-established in McMinnville. There are probably pictures like this one scattered amongst the many branches of the family. My father used to set up a tripod to get everyone in, but the pictures he took--all of them slides--are not accessible to me as I write this. I'm sure this poorly-posed shot is not the only one I took, but I also took mostly slides through the 1990s, and don't currently have a slide scanner in the house. I'm a bit disappointed, as I was hoping to have several pictures showing the evolution of the event, and of the people in attendance.
This photo does have one advantage over more recent pictures: all the young people in it are now fully grown, so I have no qualms about putting it in a blog.
Last night we had yet another iteration of the tradition. It was Thanksgiving in McMinnville again, and my brother David snapped a photo of everyone at the table that I hope he'll share with us. There were four children and one college student present. Three of the five sons of my generation were there with our respective partners. If I had that picture to display, the contrasts would be striking: of the people pictured above, only four were at the table last night. Jon's and Ocean's families were not present (and with Gabe in Chicago, Shawn in San Francisco, and Intaba in New York, there would have been far fewer of them), the foster child who was with Jon and Marci left them soon after, my children are now living adult lives in Idaho Falls, and David's former in-laws are not likely to be with us again. David and I are both with different partners now, and while David and Angela's kids were spending the day with their respective exes, Amy and I had Sarah and Alex with us. All told, there were seven people at the table last night who literally weren't in the picture at that bygone dinner.
I would have liked to have several pictures with my father in them. Next to the growth of the children, the changes in him have been the most significant over the last decade. Since broken his hip in 2006, he's been on the decline. He's in a wheelchair now, eating with large-handled flatware. He continues to enjoy family dinners, even if he's not equipped to pose a full-table portrait for his slide album.
It occurred to me as David was taking last night's picture that these photographs, if we could gather them together, would be like growth rings for our family. We could chart the evolution of the clan: Anderson red and Richard black going to gray, hairlines receding, babies appearing, growing up, and disappearing, spouses and in-laws arriving and departing, waistlines expanding and shrinking. If we turned them all into a slide show, with fading transitions, the impact would be astonishing. All those hellos and goodbyes, the people we who teased us, delighted us, annoyed us, made us laugh, cry, scream, who've come and gone, some to return to this table, some departed for ever. It would be an amazing show, powerful, moving, and by the time it was over, even total strangers who've never met any of us would be in tears.
As a young grad student at the University of Illinois, I took an educational psychology course called "Adult Development and Aging." I took it because I needed an ed psych credit for my major, and there weren't any others that fit my schedule. I wasn't looking forward to it--I wanted to teach children, not adults, once I graduated--but it planted some powerful insights in my psyche, more than any other course I took for that degree. Most significant was the realization that development never ends. Every age is a step on the path from womb to tomb.
This blog is about transitions in my life. Every day I am less young, and more old. The same goes for you. Growing up, finding and losing love, making babies, raising them, sending them off, changing careers, losing vitality, gaining wisdom, setting aside passions, acquiring new pursuits, traveling, learning, retiring, remembering, sleeping, dying--every life is an epic. Setting this moment I am in within the sweep of my personal novel, I find cause for both melancholy and excitement. I know the general form of what is to come, but know as well that many of the details will surprise me.
This is true of every person at a family gathering, every one of us capturing a snapshot of every other, glimpsing a moment on each respective timeline, all of us intersecting for this meal, then blasting back into our lives until the calendar brings us back together at a completely different moment, the children taller, the adults stronger or feebler, the partnerships and marriages shifted in both subtle and dramatic ways. It's a magnificent thing to behold. There's far more at work in these meals than sweet potatoes and turkey.
May your holiday celebrations bring you some semblance of the significance I found in being part of a photograph I haven't even seen.
adult development aging family traditions Thanksgiving dinner transition
Location: McMinnville, OR 97128, USA