An Appeal to Trump Christians 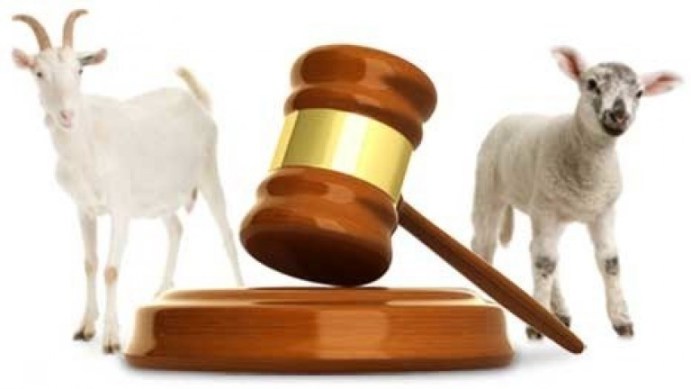 You've heard some part of this before. If you've ever been a church-going Christian, chances are good some preacher used it to make you squirm uncomfortably in the pew. For those of us ordained folk who have ever fancied ourselves in the school of the social gospel, or considered ourselves, in one way or another, on a mission from God, this may well be a favorite passage. Speaking for myself, I had it in regular rotation.

It's sometime called the "Parable of the Last Judgment," but that's a misnomer. Apart from the brief reference to animal husbandry, there's nothing metaphorical about it. It reads to me like a sermon, containing as it does a real-life (to first century Mediterraneans, anyway) illustration, vivid imagery, a surprise twist, and a warning that could easily be turned into an altar call. At its most superficial level, it's revival preaching: wake up and small the coffee before it's too late! If you want to avoid the Wrath to Come, get busy performing acts of compassion!

Dig deeper, and we find something powerfully subversive about the text, which is not so much about actions or beliefs as it is about identity. For many in the Christian world, both Catholic and Protestant, the great debate is between faith and works: are we saved by what we believe, or by what we do? Can we make ourselves more faithful by doing good works, or does great faith inspire us to perform more good works? Answer correctly, and win eternal life; answer wrong, and go away into eternal punishment.

Some will look at this passage and call it a prescription for works-righteousness. Clearly, the sheep have lived lives of good works, meeting Jesus in the most unlikely of places, and have earned their place in eternity. There's a problem with that reading, though: the sheep are clueless as to how their actions have saved them. "When did we ever meet you?" they want to know. And here's where the significance of calling them sheep--vs. goats--kicks in: they didn't choose to be sheep, that is, people who simply did the good, compassionate thing. It's just who they were. The same goes for the goats: they didn't set out to ignore the needy and, in the process, the presence of Jesus in their lives. It was simply in their nature.

The subversive quality of this scenario is that it contradicts the most essential tenet of evangelism: salvation is not about having a personal relationship with Jesus as defined by the evangelist; it's about being a compassionate person who cares for and ministers to the needy. Original sin, the Virgin birth, the Atonement, the Trinity--dogmatic sound and fury, signifying nothing. Jesus is telling us the way to eternal life is to be a good humanist.

We live in a schismatic nation, in which a President appoints himself Son of Man, judging who will remain in the promised land and who will be cast out into eternal darkness. His criteria for exclusion: faith, country of origin, pigmentation. It's as if the goatiest of goats found himself sitting on the throne. As one might expect, he's hell-bent on changing the rules to favor himself. That's just how goats are.

The most galling thing to me about the antichrist-in-chief is that so many Christians were and are wholly embracing this abomination. A Pew Research Center analysis of the 2016 Presidential vote shows Trump winning 58% of Protestant and 52% of Catholic votes. Secular commentators were shocked that so many Christians could support a candidate whose understanding of the faith, and adherence to its principles, were both so obviously lacking, though I was unsurprised by their willingness to forgive his shortcomings. What I can't begin to understand, and never have been able to understand, is how eager conservative Christians are to embrace political philosophies that do not even pay lip service to compassion. Remember when George W. Bush pushed had to append the word "compassionate" to "conservative" because the latter had become associated with cruelty and selfishness, qualities that gave even the most hard shell of Baptists cause for concern? That appears to be the case no more. Candidate Trump rose to prominence on a platform of xenophobia, racism, and misogyny, proclaiming to cheering crowds that he would expel children and refugees from the United States, literally wall them out, and pull the country back from its commitment to making the world a better place. President Trump moved fast to implement all those hateful policies, though he is finding, thankfully, that Washington bureaucracy has a way of slowing down demolition projects.

But to get back to Jesus, and to the radical subversion of this text: the judgment is not about what religion card one carries in one's wallet, whether one wears a cross around one's neck or a hajab, whether one can recite a Creed or passages from the Koran, or whether even one has any faith at all. It's about compassion: seeing people suffering and in need, and caring for them. In doing so, even completely unaware of the presence of Jesus in the situation, one does his work. The way the passage is worded, it's likely that some who are judged worthy of eternal life may have no creed at all. For my part, I've known many faithless humanitarians who didn't need a scripture or a sermon to motivate them to act compassionately. Many of them devote their entire lives to such work.

This is not, I must hasten to add, to say that all Christians are hypocrites. Far from it: everywhere there is need, there are Christian missionaries whose work is not spreading the gospel, but caring for the needy. I know some will argue that the best witness is the performance of good works, and in fact that's an interpretation for this passage that works fine.

The part that doesn't work is this: since the founding of Christianity, there have been some who sought to define it by doctrine, rather than identity. Correct belief was what got one included in the church community and, by extension, in the promise of eternal life. Believe incorrectly, and one could find oneself excommunicated, no matter how good one's works might be. The present regime fits this description to a tee, though they have expanded the definition to include the entire nation: believe as we do, or be rejected at the border.

And this is where I throw up my hands and cry out to the people I used to think I understood: these are the very people the gospel demands you care for. They're hungry, thirsty, sick, strangers to this land; and yet, rather than reach out in compassion to them, you reject them, even imprison them. Come on, Christians. So many of you have hearts of compassion. I've seen it, been on the receiving end of it, and I know it's always been sincere. Put those hearts to work once more. There's a lot more than control of Congress at stake. If you believe the Bible, riding the Trump train could have eternal implications you're not going to like.
compassion Donald Trump eternal life last judgment sheep and goats
Location: Portland, OR 97229, USA