The Light Bulb Has to Want to Change 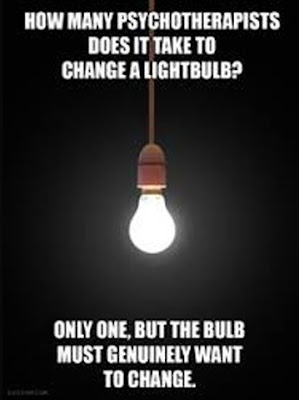 It's a tired old joke.

It's a truth I avoided until I was 24: I needed help. I was not coping with adult life, especially post-college adult life, whether as a grad student, a struggling first-year (and, as a result of that struggle, almost only year) teacher, then a seminarian. Each year, the loneliness and depression deepened, until finally I walked into the campus mental health center at SMU and was assigned a therapist. He helped me get over my difficulties with dating (primarily that I didn't know how to do it). Once I'd been on a few dates, and gotten serious, I proposed to my first real girlfriend, and felt so good that I pronounced myself cured.

Five years later, my marriage and career in ministry were falling apart, and I finally went back to therapy. This time I stuck with it: there were interruptions, but it was nineteen years before I decided I'd really done all the therapy I needed. All told, between 1985 and 2010, I saw ten different therapists. Several were pastoral counselors, trained in both psychology and theology. One was a rabbi, two were Lutheran ministers, one a United Methodist. One was an advocate of yoga. Two were women. In those two decades of therapy, I developed excellent skills at self-examination and self-awareness. I learned to probe the source of my feelings, to challenge the knee-jerk associations I made in the moment: often the deepest, darkest reactions are triggered by moments that evoke old traumas, and have little to do with the situation at hand. Self-knowledge has not been a cure-all--it's of little use when feelings of oppression are legitimate, because someone really is out to get me--but they've saved me, and my loved ones, from the sort of emotional torrents that alienated several friends and lovers in my younger days.

I share this experience as a preface to my own take on what is becoming conventional wisdom about our President: that he should be removed from office because he's insane, demented, pathological, paranoid, narcissistic, cognitively compromised, and a dozen other armchair diagnoses that both laypeople and mental health professionals have been making since Donald Trump declared his candidacy for the Presidency. I'm not a psychologist. I've taken some classes, as has anyone who's trained to be a teacher or pastor, but if anything, those courses made me extremely cautious about judging the mental health of anyone besides myself (and even in that regard, I'm much happier having the help of a trained professional in doing so). In fact, one seminary course on counseling I took could be summed up with the monotonous assertion on every page of the textbook to refer, refer, refer at the first hint of emotional distress.

I'm sure that's still what they teach in psych courses for laypeople. Even more important is the caveat, spoken by many a writer in the field of psychology, that no practitioner should make a diagnosis without spending considerable time with the subject in question. That hasn't stopped at least two degreed counselors I know from publicly declaring the President is suffering from Narcissistic Personality Order or the early stages of dementia. Nor has it kept newspapers from publishing op-eds by psychologists drawing similar conclusions.

To boil all these qualifications down: I cannot say with any certainty that the President is suffering from a mental illness, or that he should be removed from office for that reason. If he is to be impeached or in some other way removed, it is up to Congress to take that action, and if they do, it will be for political, rather than psychological, reasons: a majority of Republicans will have concluded they, and their party, that it is in the best interest of the party, and of their careers, to bring charges against the most powerful man in the world, a man whose followers, however small their numbers in real terms (less than 20% of all Americans), are possessed of a perfect storm of rabid ignorant fanaticism that makes the Tea Party look, in comparison, like an actual tea party.

With that said, President Trump has demonstrated repeatedly in the not-quite-a-month (seems like years) he's been in office that he has no interest in presenting or promoting stability, either at home or abroad. Historians caution against drawing parallels with authoritarian leaders of the past or the milieus that gave birth to their movements, and yet the similarities are inescapable: demonization and persecution of ethnic, racial, and religious minorities; blatant deception that fools no one but his followers; declaring war on both the press and the judiciary; choosing to head up a campaign rally rather than attend a summit the purpose of which is to calm the rest of the free world; preening for cameras; boasting that his margin of victory was a landslide, that the White House is accomplishing more and running smoother, than any previous administration (all lies); making high level appointments to vital government agencies using appearance and loyalty, rather than competence and experience, as essential criteria; ignoring intelligence briefings; bypassing the media to appeal directly to his rabid base through Tweets and that execrable Florida rally--time and again, Trump's choices have been those of an unbalanced tyrant. To call his decisions, actions, pronouncements, speeches, everything he does "unpresidential" is to make a colossal understatement.

Again, I can't say that he's genuinely mentally ill. This dumpster firestorm could be a macro shell game, keeping the nation distracted while, behind his back, he undermines the very foundations of our Constitutional democracy, until, one morning, we wake up and realize we are no longer living in a true republic. That's as much a possibility, I'm afraid, as him actually being insane: he's the epitome of the crazy fox, and it's just a matter of time until he emerges from the henhouse, blood dripping from his jowls, nothing but feathers left in the nest.

Whether or not he is insane, he's been acting and speaking in ways that are unacceptable. If one of my students violated so many of the reasonable expectations I, and my school, have for behavior in our classrooms, he or she would be on a behavior plan. That's what he's got in common with a naughty first grader. The difference between the two is inequity: a first grader might have a few dollars in the piggy bank. Trump has an undisclosed amount of dollars invested in hotels and other products (how much is impossible to know, as he won't release his taxes, but given his penchant for telling whoppers, it can't be anywhere near as much as he's led us to believe).

If that first grader continues to misbehave through puberty and adolescence, and eventually is diagnosed with a psychological disorder, another dissimilarity kicks in: there's a substantial chance that he or she will wind up dead, whether from self-harm or at the hands of law enforcement. Meanwhile, the President has an enormous security apparatus protecting him at voter expense. The lesson in this: acting crazy gets a poor person shot, and a rich person elected President.

Where's the hope in this insanity? As I said earlier, it's up to Congress to do the political calculus and come to the decision that such behavior will not be tolerated in the Oval Office. They're nowhere near that point yet. They're more like the doting parents who just don't understand why so many teachers are complaining about how their darling child is acting, even as lesson upon lesson is hijacked, and every other child in the class suffers from the misbehavior. Like those parents, Congress needs a wakeup call. Perhaps it will be the droves of protesters at their constituent town hall meetings: it's already gotten ACA repeal pushed to a back burner. Or maybe it'll be the corporate interests that, facing boycott over their ties to Trump, publicly denounce him. Corporations matter to Republican leaders, more, it often seems, than constituents. At some point, Paul Ryan and Mitch McConnell are going to have to make an extremely uncomfortable appointment with the President, and give him the choice of resigning or being removed.

Because he's not going to change. He doesn't want to. So they're going to have to do the changing themselves.
Donald Trump narcissism President Trump psychology therapy
Location: Portland, OR 97229, USA