Like most progressive West Coast Americans, I'm grief-stricken at what's happening to my country, horrified that so many who consider themselves patriots could vote for a racist misogynist authoritarian windbag, and furious that our antiquated electoral system awarded the most powerful office in the world to a man who actually received far less than even a plurality of the popular vote. As with my long-standing beef with United Methodism, this leads me, like so many in my circle, to contemplate seceding: taking our vital economy, our big-hearted people, our earth-friendly attitude, and letting the xenophobic rural remainder fend for themselves. Let's see how well they do without us.

There's nothing new about this idea. Various configurations of West Coast states (sometimes including British Columbia), joined together as a nation of their own, have been floated by futurists and environmentalists going well back into the last century. The result goes by a variety of names: Pacifica, Cascadia, Ecotopia. The impetus for secession is typically that our side of the country is fed up with taking orders from people who don't share our values or ideals.

It's comforting to imagine what it would be like to simply cut ourselves off from all those people who've made such a horrible decision. Of course, we'd have to maintain sister-nation ties with Atlantica, the East Coast corollary of our push for independence. It's even more delightful to imagine what would become of our embarrassing President-Elect, as both his permanent address and the White House would be part of Atlantica. Perhaps he could move the government to Idaho Falls. They love him there.

But here's the problem with secession--or, if we're really thinking about West Coast and East Coast republics breaking away, what we should really call partition: who's in and who's out.

Looking at the electoral map, it's tempting to think that the nation breaks down neatly into blue and red states: 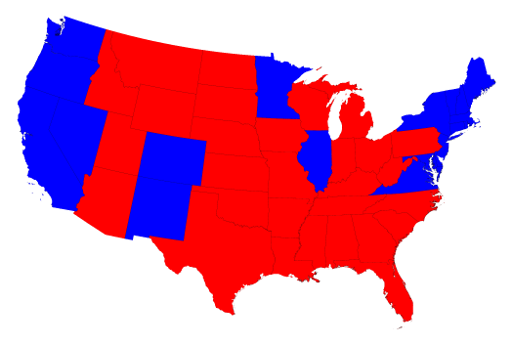 The problem with this approach--and, as noted earlier, with the whole American electoral system--is that it's nowhere near that neat. There are plenty of red states on the map that should have been blue, according to polling right up to Election Day. At the same time, there are blue states that were much closer than was expected. And while Hillary Clinton did receive a majority of the popular vote (estimated to be somewhere between 1-2%, once all absentee ballots are counted), most of her margin comes from a few population centers: New York City, much of California, and Washington state. Yes, we of the Pacific Northwest did give her substantial majorities, but even here--and yes, even in New York City and Southern California--there are sizable segments of the population who voted for Trump. Travel a short distance outside any of our urban areas, and the Trump numbers go up. Cross the mountains to our high desert communities, and you've got large portions of all three West Coast states that voted, by substantial majorities, for Trump. If we're really going to separate ourselves from Trump Nation, we have to ask ourselves if we're going to take our beautiful rural regions with us. And if we do, will they go willingly?

Look at that red/blue map again. Does it remind you of anything you might have studied in, say, world history, ca. 1947? Anything like, oh, this:

Just in case you're rusty on your post-colonial history, or haven't seen Gandhi since it came out, here it is in a nutshell: India under British rule was a land of religious diversity, birthplace of Buddhism, home to Hindus, Sikhs, Jains, and Muslims. Members of all these faiths banded together to peacefully rise up against the colonial authorities, and in 1947, India became independent. Almost immediately, Muslims and Hindus turned on each other, and in the end, there was no way to hold the nation together: Muslims migrated to regions in which they were already the majority of the population, while Hindus migrated to the larger central Indian republic. The Muslim homelands became Pakistan. Interfaith violence took thousands of lives, and millions of people were displaced. Relations between India and Pakistan are still tense seven decades later, with both nations maintaining nuclear arsenals as a mutual deterrent.

That, my friends, is what secession really looks like: not the progressive ecological paradise of Cascadia, but the bloody ethnically cleansed tragedy of India/Pakistan.

There are people in my neighborhood who voted for Trump. I don't believe there are any members of my family who did, but I have at least a few friends who probably did (they're keeping quiet, so it's hard to be sure). Incidents of racial violence have been committed in urban areas across the United States, places where large majorities voted Democrat. There are a lot of Trump followers out there, even in our precious West Coast progressive cities. Unless we want to become the next India, the next Yugoslavia, we cannot start forcing people to relocate, no matter how reprehensible their taste in Presidential candidates might be.

There's a larger point here: staying united, even in the face of deep moral and cultural divisions, is what makes us American. It's the cause Abraham Lincoln gave his life for. It's the reason losing Presidential candidates, whether Democrat or Republican, always pledge to support the victor. The diversity of this nation is what makes it strong.

Normally when we talk about diversity, we've got minorities in mind: persons of color, people whose native tongue is not English, the whole LGBTQ rainbow. There is a deeper diversity at the root of American exceptionalism, however: that of ideas. I know, faced with a President-elect whose approach to ideas he dislikes is to threaten violation of Constitutionally protected freedoms, it's tempting to scoff at how real that diversity is; and yet, nations have divided over ideas far less significant than those separating Clinton and Trump supporters.

What we don't want to, yet very much have to, face is this simple truth: many well-meaning people voted for Donald Trump, and chances are very good that we all know at least a few of them. We have to go on living and working beside these people. As much as we might want to build a spite fence running from Spokane to San Diego, this land is OUR land. Not my land, not your land, our land. All of us together. In the dark days ahead, we'll need to keep reminding ourselves of that fact, even as those of us who lost so much in this election work to mitigate, even reverse, the deleterious effects the incoming administration will have on the peace and well-being of our entire population.

As we do, they're going to find that we're also decent people, that, in fact, we care deeply about their well-being. That in itself will almost certainly put a dent in support for the Trump administration. It will also most likely bring us together with other like-minded individuals, and begin the work of promoting our next candidate for President. If Trump stays true to his nepotistic, race/gender/faith-baiting, deeply corrupt ways, people will be wishing they could vote him out at the midterm election break. Let's make sure we continue to go high, however low they may descend to in their own assaults on civility. At some point, Republicans will begin paying attention to who the genuinely grown-up candidate is.
2016 election Cascadia Donald Trump Ecotopia India Pacifica partition secession
Location: Portland, OR, USA