No, We Are Not Going to Get Over It 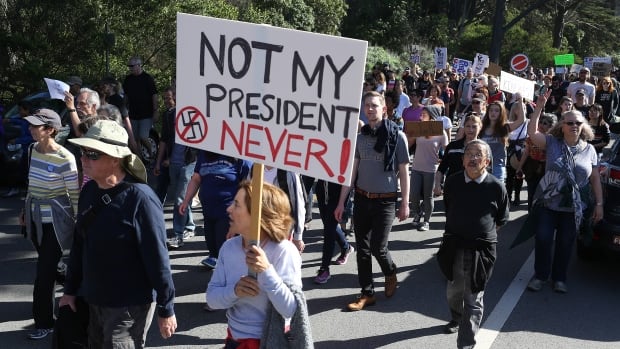 Congratulations on your electoral upset. You've been working toward this for a very long time (just over eight years, I believe), and you must be enormously relieved that all that effort has finally paid off. I understand your eagerness to dive in and get to work overhauling American democracy. I also get your annoyance with all of us in the opposition. It must really suck that we don't share your glee. Of course you want us to just get over with it, to simply accept the election results and pretend everything's just fine, just like you did eight years ago.

Oh, wait. Come to think of it, that's not how you handled things then, is it?

In fact, if memory serves, you launched a campaign of obstruction that soured all the joy and hope of the Obama election. You launched a grassroots movement that was a model of inclusiveness, in that you welcomed all sorts of people who hated our first Black President: racists, homophobes, nationalists, misogynists--anyone you could count on to disrupt the democratic effort to gather information for health care reform, ultimately forcing us to create a system modeled on one of your own proposals, and pass it without your help. Then you campaigned against this plan, brainchild of your own 2012 Presidential nominee, and succeeded in taking back first the House, then the Senate, neither of which was willing to work with the President on anything.

So you never got over it. The only thing that could heal you of your fury at electing Barack Obama was electing his polar opposite, a rich racist sexual predator who has ridden a wave of angry bigotry to claim the world's most powerful office.

So if we're not just "getting over it" less than two weeks after the election, you can maybe cut us a little slack, okay? Hypocrisy is an ugly thing, and I'd hate to think y'all would be choosing ugliness over classiness.

Seriously--and now I'm writing to my fellow progressives--getting over it is a very bad idea. What happened twelve days ago was a violation of our democracy. And for those of us over the age of 33, this is the second time we've had the Presidency stolen from us by a system rigged to give more electoral weight to white conservative landowners than to for more diverse urban liberals. Losing so much, and knowing what it's going to cost our nation and world, we are quite naturally grieving. We're also terrified that our country is going to slide into fascism, and that people we love who are gay, Black, Brown, new to this country, are going to be registered, abused, interned, deported. We've already seen their systematic disenfranchisement by the cynical Republican electoral machine. How can we not worry that, emboldened by the victory of a standard-bearer who, in a fair election, would have been unelectable, the Republicans will continue to work to restore the unequitable electoral system of the early twentieth century, a system that advantages white, well-off conservatives over every other constituency?

No, we're not going to get over it. In fact, the best approach we can take is that which has been so ably modeled for us by the Republicans for the last eight years: resistance at every level, fighting to our last breath to hang onto whatever scrap of Obama-era progress can be preserved.

Twenty-eight years ago, as a student pastor in Cheadle, a suburb of Manchester, England, I went to visit George Lawley, a retired gentleman who had been a Labour Party activist in his day. George was in a lather that day: he'd just read Michael Dukakis's concession speech, and he was furious that the Democrats were pledging to work with the Republicans. "They must not do this!" he said, his eyes shining. "They must pledge to fight and fight and fight, and never give an inch until they are back in power!" This has always been the British political tradition: the party out of power is the loyal opposition, holding to their principles even in the face of defeat, always offering a complete alternative to the policies of the elected government.

Of course, in Britain, the party winning the election always has all the power. That's how parliamentary democracy works. It's rare for American political parties to have control of both the executive and legislative branches of government, so American Presidents have had to work with opposition parties in at least one chamber of Congress in order to further their agendas. That was not the case in the first two years of the Obama Administration, of course; and while I'm sure it was frustrating for the President to have Republicans rejecting a health care bill so favorable to insurance companies that, had it been proposed by a Republican President, they would've passed it in a day, I also have to admit they created a brilliant model for opposition.

That's what Democrats have to be for at least the next two years, and probably many more than that: loyally oppose all of Donald Trump's extremist ideas and appointments. Filibuster his right-wing nominations to the Supreme Court, insisting that this should be the decision of the next President, one elected by a majority of the American people. Keep the vast infrastructure of Hillary Clinton's campaign organization, and use it to elect state legislators who will reverse the gerrymandering of the Congressional map. Launch a nationwide search for the next Obama, a politician who embodies the dreams of the huge coalition of minorities who are the true majority of Americans. Be a loyal opposition, because unopposed policies and ideas can never be as fair, just, or effective as those that have been put through the legislative grinder. Be loyal to the Constitution, loyal to the principles of fairness at work, justice in the court, equality at the ballot box, transparency before the media, responsibility for the world in which we live.

Sorry, Republicans, but we are not going to get over it. Ever.
2016 election loyal opposition Trump victory
Location: Portland, OR 97229, USA