The Mad That I Feel 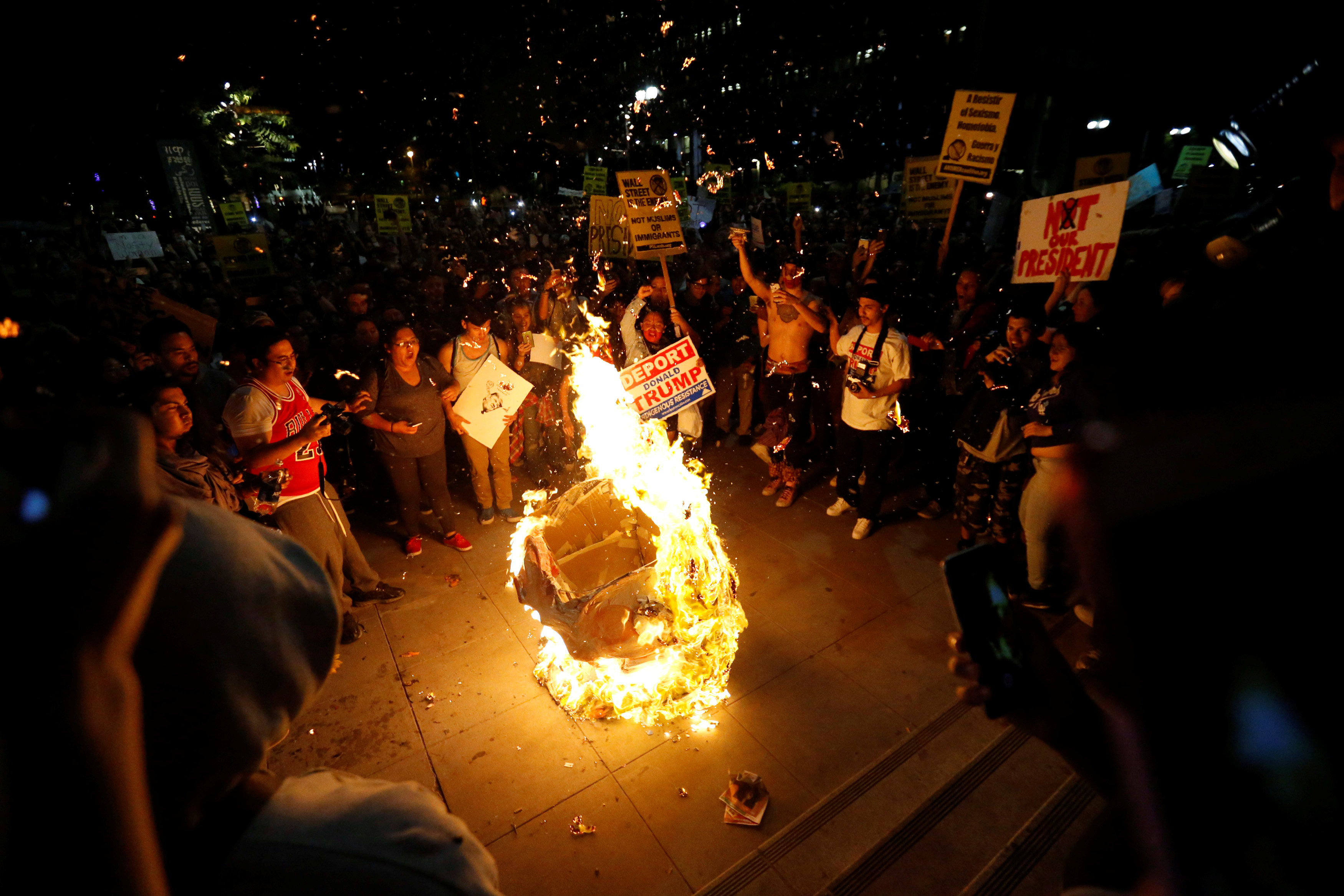 What do you do with the mad that you feel
When you feel so mad you could bite?
When the whole wide world seems oh, so wrong...
And nothing you do seems very right?
What do you do? Do you punch a bag?
Do you pound some clay or some dough?
Do you round up friends for a game of tag?
Or see how fast you go?
It's great to be able to stop
When you've planned a thing that's wrong,
And be able to do something else instead
And think this song:
I can stop when I want to
Can stop when I wish.
I can stop, stop, stop any time.
And what a good feeling to feel like this
And know that the feeling is really mine.
Know that there's something deep inside
That helps us become what we can.
For a girl can be someday a woman
And a boy can be someday a man.

I was at the gym, lifting weights, listening to Marc Maron's Wednesday morning rant about the horror of Tuesday night. Normally I would go on to hear the interview that followed, but I had just finished a long one he did with a reporter discussing the incredible damage black tar heroin has done across the United States, helping me understand that there's a good chance many who voted for Trump did so out of the anger and grief of losing a loved one to this pervasive poison. So there I was, preparing to do some bicep curls, and I'd just had enough. It didn't matter that the next interview wouldn't have mentioned the election in any way. I needed a change of thought stream.

So I clicked on a Fresh Air interview with TV critic David Bianculli, talking about the greatest moments in television history. Twenty minutes in, he played two clips of Fred Rogers from 1968. In one, Daniel Striped Tiger had a conversation with Lady Elaine Fairchild about the assassination of Bobby Kennedy. In the other, Mr. Rogers appeared before a Senate committee considering whether to fund public television, and quoted his song about "The Mad That You Feel," winning over the hardest-hearted critic on the committee. I heard him speak those words in that gentle voice I remember so well from my own childhood (I was part of the first generation to experience Mr. Rogers, and remember watching it before going to school on National Educational Television, the predecessor to PBS), and I found myself moved so deeply I had to dry my eyes with my workout towel.

To be fair, there's been a lot of eye-drying since Tuesday night. But to put this in perspective: demonstrators across the United States are filling city streets to cry out against the election of Donald Trump. They're grief-stricken by the abrupt reversal of a historic moment, by the prospect of having all the hard-won progress of the last eight years at risk from a united conservative government, and most of all by the possibility of having a man who embodies all the most deplorable aspects of American identity taking the place of a President who was, in so many ways, the absolute opposite. The protesters chant, march, wave signs, block highways. Some engage in more visceral displays of outrage, burning flags and effigies. Some go farther: anarchists in Portland have been destroying property.

Anarchists are not the only people expressing themselves violently. Empowered by the election result, bigots have thrown politeness under the bus, and are freely expressing their hatred to persons of color, immigrants, Muslims, Jews, women, and any liberal-looking people who might cross their paths.

I understand the anger, the need to express it, the temptation to do so in destructive ways. That's the nature of anger. Fred Rogers was writing for preschoolers, but the message of those words rings true for anyone who's ever fantasized about giving a bully a taste of his own medicine. Donald Trump is not just the embodiment of the anger and despair felt by so many rural and working class Americans. To those of us who grew up in a culture of liberal values and found ourselves on the receiving end of working class anger, he symbolizes the brutes who made our teen years intolerable. We wanted desperately for him to get his comeuppance, to be taught a lesson by the women and minorities who had been on the receiving end of his venomous rants. Instead, we learned to our horror, he actually had a majority of white women voting for him, and even a sizable number of Hispanic Americans.

And as for those protesters: while they give voice to the fury of the popular majority who voted for Hillary Clinton, their geographic identity demonstrates why she lost. The cities in which they march were part of that majority. The places that won him the election were a combination of farm country and failing mill towns. He aimed his rhetoric at people who no longer feel like the intellectual elite of the Democratic party speaks for them. They resonated with the emotion behind his words, and cared little for the abominable and often self-contradictory meaning of those words.

This leaves us liberals in a confusing place. Up until 1999, I had spent most of my life in Trump Country, growing up in small towns, then returning to them as a Methodist minister. The farmers, laborers, and small business owners who were my father's parishioners and, later on, my parishioners were, by and large, decent, generous people. Seeing a person in need, their first response would be charity. Hearing a personal story of oppression, they would feel empathy and compassion. Their politics and theology were rarely sophisticated, though the folksy veneer could sometimes hide an amazingly complex world view. Because they were Methodists, not Pentecostals or Evangelicals, many of them were probably Democrats. But because I believed in big tent Methodism, we never discussed partisan politics, and I just don't know.

That not knowing serves me well today, as there are few, if any, of my former parishioners I can identify as Trump voters. That's a good thing, because as much as I want to empathize with the fear and pain that generated such a desire for putting a dictator in the White House, it's ultimately a bridge too far for me to cross. If any of the people I know were to proudly announce he or she voted for That Man, I'm afraid it would be the end of our friendship. I'd much rather look back on those old relationships fondly, remembering the warmth I felt in their company.

This is a problem we of the left are going to have to resolve. Even though the West Coast voted overwhelmingly for Clinton, all three of our states contain substantial Trump populations. Drive a few minutes south of Wilsonville, or head over to Gresham, and one can easily find Trump lawn signs, bumper stickers, and large pickups decked with American flags tattered from too many miles of high speed driving. Head over the Cascades to Bend, my second-favorite city in Oregon, and I'm sure these indicators of Trumpism proliferate. In August, we saw them all over rural New Hampshire. I'm hearing stories of racist incidents taking place in Eugene and Los Angeles. We can pride ourselves on having progressive majorities, but there may very well be Trump voters living right across the street from us.

Somehow, we are going to have to live with these people. Seceding from the rest of the country isn't going to be any help at all. Political cleansing would be no more humane than ethnic cleansing. Like it or not, political diversity is all around us.

So what do I do with the mad that I feel? Lashing out at individuals is not the progressive way. Hillary Clinton and Barack Obama have both been criticized for the graciousness of their concession of the election, and the White House, to Donald Trump, a living, breathing example of going high, even as his own campaign went as low as any in living memory. I'm sure they're both seething underneath with frustration at the electorate, outrage at the media, fury at Trump and his surrogates. But as with all intelligent progressive action, that anger, however righteous, must be channeled, tempered, used constructively. Use it irresponsibly--react in kind to the nasty gloating of the alt right--and we could find ourselves in the midst of a civil war. The right wing has been building to this moment since Newt Gingrich took over as Speaker of the House in 1994. We've got to find a way to back away from the abyss, to de-escalate the violent triumphalism of the right and the grief-stricken fury of the left, to come together as a people and a nation.

What do I do with the mad that I feel? Obviously, I write. This is my third post since the election, and the longest thus far. I'll also be wearing a safety pin, a simple nonpartisan symbol of my willingness to step into the midst of a potential hate crime and keep a fellow human from being victimized, and other humans from committing assault. I'll teach music to children, because music is a balm that can heal all manner of divisions, an unmatched force for truth and beauty. I'll perform music. I'll give to organizations that promote human dignity and advocate for the marginalized.

Now, what are you going to do with the mad that you feel?
Labels: anarchists anger Donald Trump Mr. Rogers
Location: Portland, OR 97229, USA