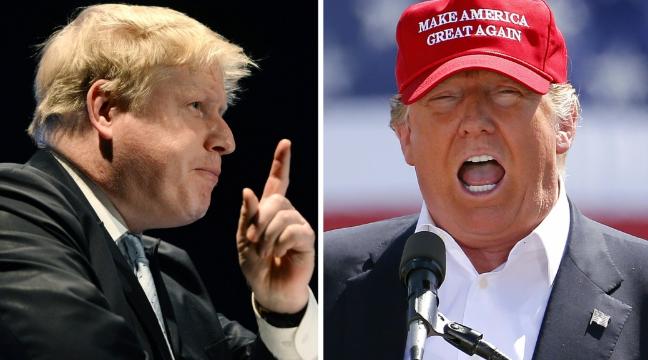 These jerks have a lot in common.

The voters have spoken, and the United Kingdom will leave the European Union. Or perhaps it won't. Or maybe the kingdom will divide, and Scotland and Northern Ireland will remain in the EU while the stump of England and Wales leave. Except London would rather remain. And with the promises used to convince voters to leave turning out to be mostly exaggerations, if not out right lies, maybe they'll take another vote. Or not.

It's all so frustrating, so counterintuitive, so irrational, so...familiar.

The Brexit campaign was led by two British politicians: Nigel Farage, leader of the United Kingdom Independence Party, and Boris Johnson, former mayor of London and probable contender to replace David Cameron as Conservative party leader and possibly prime minister. In their quest to flush the British economy, and possibly that of the rest of the Western world, down the loo, Johnson, Farage, and the campaign they spearheaded said many things about immigration, spending, and policy that they are now having to walk back or deny--not unlike a certain spray-tanned, wild-haired demagogue who will almost certainly be the Republican nominee for President. It turns out the racist populism that gave him the edge in so many caucuses and primaries doesn't even come close to representing a majority of the general electorate, and is, if anything, energizing not just minority voters, but independents, Democrats, and even some Republicans to commit to defeating him in November--and possibly costing the GOP their majorities in both chambers of Congress.

And yet, as Bob Garfield has written, the majority that will defeat Donald Trump dare not breathe easy. More than 13 million people voted for Trump in the primaries, and if he wins even 40 per cent of the general election vote, that number could rise to 50 million ballots cast for xenophobic populist hate mongering. Numbers like that turned the Weimar Republic into the Third Reich. And here's another thing to consider: those Trump voters are both less educated, and better armed, than the German minority who gave Hitler his step up to demonhood.

The British voters who, in their ignorance, passed the Brexit referendum were mostly middle-aged and older, white, rural, and lower income. The "remain" electorate were predominantly young, urban, and better educated. Trump voters look a lot like "leave" voters, and have similar axes to grind: the global economy has left them behind, and in their anger, they blame those who look most global: immigrants who are also persons of color; and the business elites whose exploitation of the economy caused it to collapse in 2008.

I empathize with those voters. I, too, was hurt by the recession, RIFed out of my teaching job. It took me four years to return to full-time work. That's a big bite out of my eventual retirement income, and probably means I'll have to stay in the work force until later in life than most of my colleagues. This didn't have to happen: if the financial industry had been better-regulated, if the traders running it had had fiduciary responsibility, if the previous administration hadn't been obsessed with making the rich richer, if if if if if...

But happen it did, and working class and middle class people around the world suffered. Leap forward just a few years, and the culprits who caused the collapse are starting to feel uncomfortable. The Tea Party movement could easily have turned on them, but allowed itself to be co-opted into the Republican obsession with obstructing the Obama administration agenda. Ultimately, that movement fell apart, as its base had a series of "Hey, wait a minute..." moments, and realized the GOP establishment was not, in fact, any more fiduciary than the financial industry that donated so generously to its politicians. Rather than turn to the other establishment party, these voters found a voice in the erratic rants of a self-professed billionaire, a man who exemplified so many of the practices that caused the collapse. Somehow, rather than becoming the object of their anger, he channeled it, making common cause with them against immigrants and intellectuals. Working in parallel, the Brexit movement played a similar game, presenting a mix of xenophobia and unattainable promises.

I feel the pain of the Brexiters and the Trumpers, and I know these people. I grew up in small towns like those that voted out of the EU, or for the Donald. My schoolmates, my parishioners, and the parents of some of my students probably have a fair number of Trump bumper stickers on their cars. The typical Trump or Brexit voter looks a lot like me: white, middle-aged, male. Just as my generation (despite its counter-cultural youth) handed Congress to the Tea Party, so it is now handing the Republican party to Donald Trump, and England and Wales to Boris Johnson and Nigel Farage. My generation sucks.

But hang on, hipsters: you're not innocent, either. If you had turned out in larger numbers in the Brexit referendum, you could've held the line against the Leave voters. And while poll numbers are looking promising in the American Presidential election, it's far too early to rest easy. A lot could happen between now and November 8. You can't count on my sucky generation to make the right choice at the ballot box. If you stay away on election day (as many of you disappointed Bernie believers have promised to do), we still might be facing a Thousand Year Reich in Washington.

Britain is reeling from its bad decision. Trillions of pounds vanished overnight. The economic earthquake was felt around the world: Wall Street had a very bad day, as well. Giving in to anger and hatred doesn't just hurt the objects of those feelings. It washes over the bystanders who thought they could stay out of it, and ultimately splashes back on the haters themselves, dragging everyone down with the scapegoats.

As much as Britain is hurting now, the impact of a Trump win in November would be far worse. The British economic is significant, but it's tiny next to Wall Street. The aftermath of a Trump win would make 2008 look like a walk in the park.

Brexit was enabled, to a large part, by the disorganization of the Remain campaign; and in the wake of the vote, both the Conservative and Labour parties are coming apart at the seams. The one thing Americans can do to avoid the Trumpocalypse from happening is to unite against it: every age, every ethnicity, every skin tone, every orientation, gender, class, occupation, political persuasion working together to turn back the tide of hatred. That means Sandersites making common cause not just with Clintonians, but with rational Republicans. We don't have to agree on any issue but this one: saying no to Donald Trump.

Can we do that, America? I sure hope so. Canada's too chilly for my tastes, Britain's not likely to be welcoming ex-pats of any nationality for some time to come, and Australia's just too bloody hot. I'd much rather remain.
Bernie Sanders Boris Johnson Brexit Donald Trump election Nigel Farage
Location: Portland, OR 97229, USA