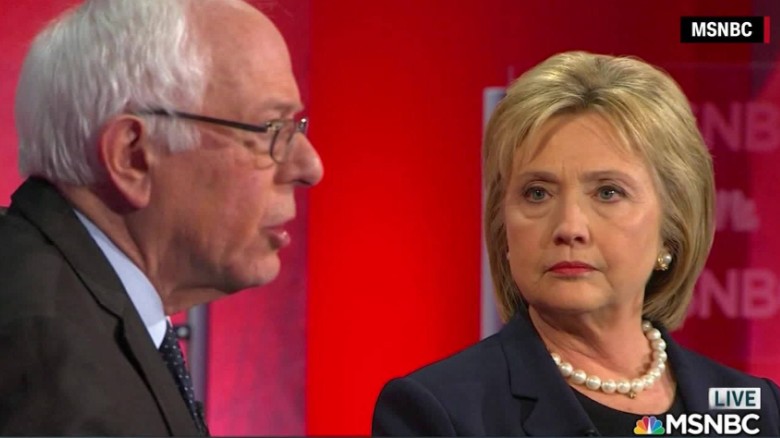 Sometime soon, these two may be able to occupy the same room with smiles on their faces.

Think back to a time when you wanted something with every fiber of your being, wanted it so desperately that you would've given your life for it, in fact in some ways you did give your life for it, and once you realized you couldn't have it, you grieved so deeply the world could have been destroyed around you, could've been destroyed because of you, and you wouldn't have cared, in fact you wanted everyone to feel your pain and no one to ever smile or laugh or enjoy life again.

That paragraph was far too easy to write for the simple reason that I've been in that place myself several times. The occasions: losing an election when I was 17; being "friend-zoned" by a girl I had fallen deeply in love with a week before I turned 21; and the apocalypse that kept on giving, my first divorce (because when kids are part of the picture, you get to revisit the hellmouth every time there's a major custody dispute). There were others I could list, but those are the big ones that come back to me again and again.

Think back to your own private collection of apocalyptic losses, and you'll find two things in common: that sense that the world simply could not go on unless you had that one thing you longed for with such gut-wrenching passion; and the contradictory realization, whether it abruptly came to you the day after you finally lost all hope or gradually crept in over the weeks and months afterward, that hey, the existence of the world isn't actually dependent on whether I get my way.

That's how it was for every one of the cataclysms I've endured. All is lost. There's nothing left of me but a puddle of tears. Somehow I come back together enough to crawl into bed. I don't sleep that night, at least not until it's almost time to get up anyway. And then I do get up. Maybe I go to work. Maybe I call in sick. Maybe I spend the day picking up pieces, rearranging my life around this new reality. I spend some time--days, weeks, months--mending, noticing that the sun keeps rising and setting, that children are still friendly and playful, that it feels good to work out, that food and drink are tasting good once again, that there are people who love me and want me to be happy, that there are other things I can do with my life that don't demand as much of me and may ultimately be much more fulfilling than the black hole I poured myself into before it blew up. At some point, I realize I've let go enough to move on; and then I really have moved on, and I'm in a new, better place, and I can't believe how of my world I was willing to sacrifice to get that one thing, and I promise myself that next time I'll be wiser. Sometimes I am, and I manage to avoid a repeat apocalypse. Other times it comes out just as bad--and in one case, even worse, though this is no place to go into that.

I'd like to say it's gotten easier and more rational as I've aged, except it's just not true: in February I had a professional apocalypse as I poured myself into trying to keep my job, fighting for it as far and as long as I could. Emotionally, it was like every other time I've been down this road. The one thing that's gotten better is the speed with which I start picking up the pieces: the day after I lost this battle, I began updating my profile on employment websites. And after just two months in limbo, I landed a far better job.

But back to the archetype: when we find ourselves on the field of Armageddon, face to face with the forces of destruction, or worse, when the battle has ended and we're lying on that field, maimed, our essence draining into the mud as the foe we devoted our lives to defeating marches away victorious, we may just wish we could push a button to launch a doomsday weapon and wipe the slate clean. Luckily for me and the people I love, I haven't gone down that road. But it's been tempting.

There are millions of patriotic Americans who are waking up to the realization that the cause they poured their hearts and souls into is lost. They threw themselves into a campaign to remake politics in the United States, to remold this capitalist nation into a social democracy, and they came far closer than anyone in the know thought they could to putting their candidate at the top of the ballot. Their passion has been plain in the seemingly endless Bernie Sanders memes they've posted on Facebook, and the vitriol that filled their comments on my essays criticizing his campaign and his platform. In the last few weeks, as it became clear to the campaign that Hillary Clinton would emerge from the final primaries with a clear majority of both pledged and super delegates, some of these Sanders supporters faced reality with resignation. Others turned up the heat, and began talking about petitioning super delegates to change their votes, to hypocritically use an aspect of the system that Sanders had vilified to steal the nomination from the popularly elected candidate. Even as Sanders has laid off campaign staff and has spoken of uniting with other Democrats to defeat Donald Trump, rather than dividing the party so he can quixotically continue his quest, they've gone on insisting that the nomination isn't decided until every delegate's vote has been counted at the convention. Some go beyond these hopes, and speak of literal revolution: marching in the streets of Philadelphia, using anarchy to lay bare the divisions within the party.

And some will vote for Trump, because they've swallowed the hokum that it would be better for the country to go up in flames than to have Hillary Clinton as President.

To those of you too wracked with grief to step into the promise of a new Clinton Administration: I get it. We all do. When you invest so much of your being in a particular outcome, losing it feels like death--except death would be more merciful, because you wouldn't have to go on living with the pain. And to those of you whose devotion to this outcome was powered as much by anger as by hope, we get that, too. We've all wanted to blow the world up when our righteous passion went unfulfilled.

But to those of you who, furious that you couldn't make a true majority of Democrats "feel the Bern," want to literalize that pun and bring the whole thing down in flames: stop. Think. Remember who Bernie has worked for his entire career: the poor, the oppressed, the marginalized. These are the people who will suffer the most under a Trump regime. They'll find their recently-acquired Obamacare cut, rather than expanded. They'll lose their unemployment benefits. Many of them will be deported. Others won't be able to get in. And as the economy goes up in flames, the suffering will expand far beyond the low rent districts. It really will be an apocalypse.

There's far more at stake here than your hurt feelings. So step back from the brink, take a deep breath, hold your nose if necessary, and acknowledge the truth: Hillary Clinton is better for the nation, and the world, than Donald Trump.

And who knows? Once Hillary and Bernie get past the ugliness of the last couple of months, they might just find they have far more in common than they realized. Working together, they can put forward a more progressive platform than the Democratic party has had in decades. They can pressure the party to standardize its nominating process. They can capitalize and Sanders' enhanced stature to move Congress toward real reforms, to simplify and broaden health insurance coverage, and to continue expanding civil rights. Working together, they can build a stronger, more compassionate party, nation, and world.

Or we can have an anarchic revolution that brings the whole thing down in flames.

Just speaking for myself, I like the first option much better.