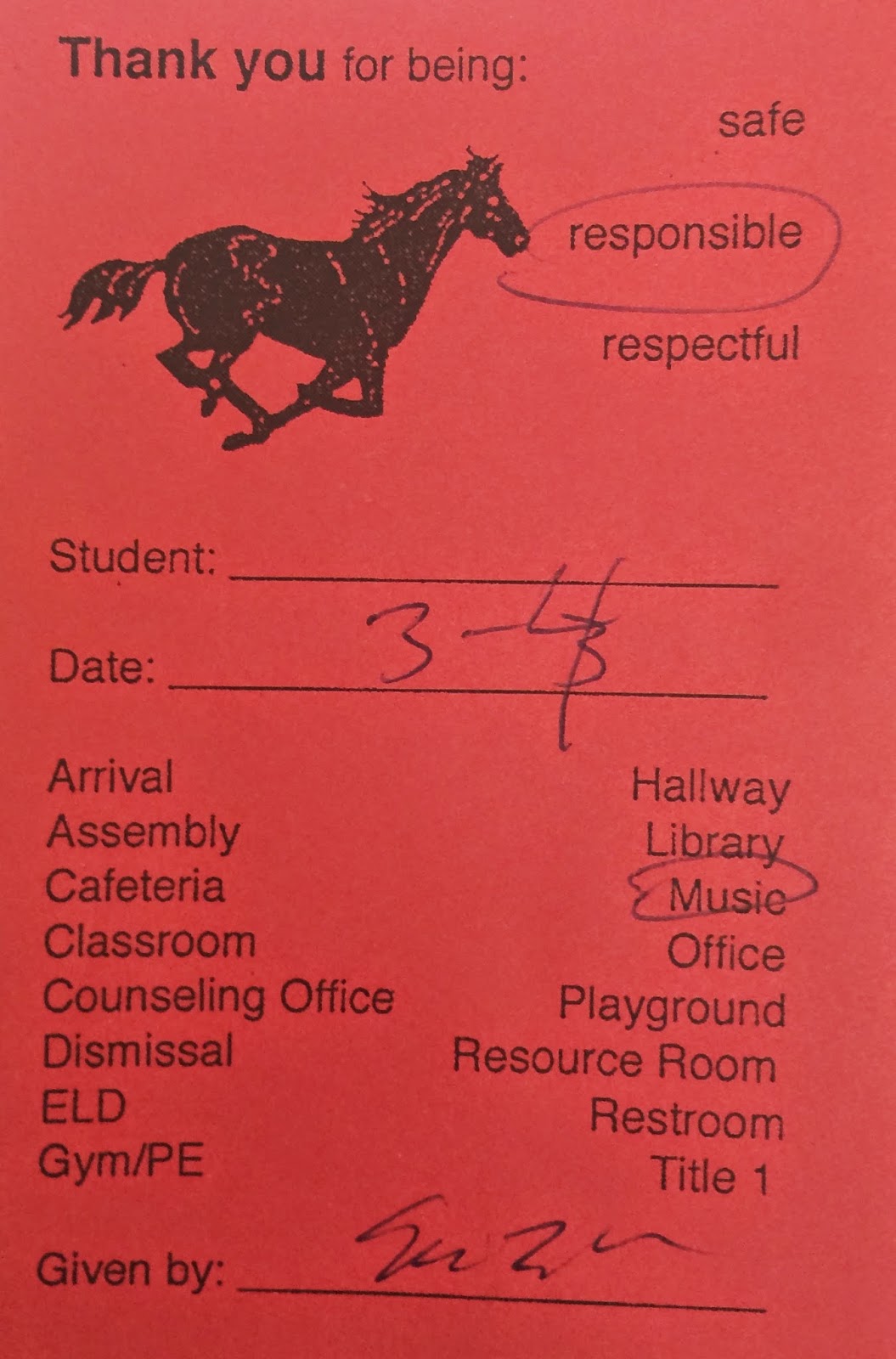 A thank you ticket.

It took me a long time to warm up to the concept of the thank you ticket.

Thank you tickets are a PBIS (Positive Behavioral Interventions and Supports) approach to school discipline: find a child acting appropriately in a given situation, and write and present him or her with a ticket in as public a manner as possible: "Thank you, Tina, for walking so quietly down the hall!" "Thank you, TreSean, for sitting so quietly in the circle while I pass out instruments!" Other children see the presentation of the ticket and quickly respond by imitating the rewarded behavior. Handing out another ticket or two should, according to the theory, get an entire class quieted, and any lingering disrupters--instigators for whom the personal rewards of misbehavior outweigh any benefit of getting a ticket--can be more easily addressed by the teacher. And why, you may ask, should the tickets be a reward? For some children, the ticket all by itself is reward enough, though these are usually the children who don't need such tokens to manage their impulses. For the rest, the tickets are a kind of scrip that can be used several times a year in the "student store": a flea market of tchotchkes and teacher-donated items that can be purchased with thank you tickets.

My reluctance to buy into this system (and yes, I use "buy in" intentionally) originates in my preference for intrinsic motivational techniques. Ideally, the subject matter I'm teaching should be motivation enough to keep kids in line: those who behave while I'm demonstrating get first choice of instruments when it's time to play. Unfortunately, every class has a few children who genuinely don't like being in music, prefer the negative attention of referrals and glares from other students, or simply can't control their fidgety impulsive bodies without an additional layer of extrinsic motivation. They have to be bought off. And for these children, the thank you tickets work wonders. In fact, the most effective way to use the tickets is to catch a high flyer doing something right and reward that child on the spot with a ticket.

That's where I've finally accepted the necessity of using this motivational gimmick: handing out these slips gives me the extra minute of full-class attention I need to get the class started on a lesson. Once I've communicated the basic introductory information, it's much easier to manage children's behavior by moving them from one station to another, separating troublesome clumps of socializers, all the basic classroom techniques one learns in Education 101.

In the last week, though, a troublesome situation has arisen at Margaret Scott Elementary School: children are stealing thank you tickets off teacher desks and from the work room and, apparently, operating a sort of underground economy with them. It remains to be seen how they'll use these tickets, since to be accepted at the student store, tickets have to be vetted by classroom teachers, and every ticket must have a staff member's signature to be valid. Perhaps some more enterprising child has been practicing forgery. More likely, whoever's been stealing the tickets just hasn't thought it through. The first staff member to report the problem was a second grade teacher, and of all the age levels in an elementary school, I've found second grade to be simultaneously the most most ethically experimental and harshly judgmental. They're at the awkward stage of outgrowing baby cuteness and not quite having tweener smarts yet. Second grade boys, in particular, can be aggressive, impulsive, and reckless.

The irony of this situation is a reminder to me of the problem inherent in extrinsic motivation: when we buy good behavior with a reward, we make morality transactional, and any system of buying and selling is subject to the morality of the free market. Rather than teach children the right way to act in school, it becomes a resource to be exploited by the very children who most need to learn how to act. As with any resource, it's just a matter of time until enterprise trumps morality, dishonesty creeps into the system, and security measures have to be taken. Staff signatures will be double checked, thank you tickets locked away when the teacher's out of the room. At some point, the perpetrators will find their ingenuity resulting in some kind of punishment.

There's a terrible poignancy at play here, as well: many of these children live in poverty. Scott is a Title I school, and if I still had any college loans, I could have them forgiven for teaching here. The used toys and books that will stock the student store when it next opens in a week are nothing fancy, but they're more than these kids can afford even at the thrift store. Add to this the tragedy of a child who wants nothing more than to be praised--even if the token of praise is a ticket stolen from the teacher's desk or, even worse (and I've seen this happen in my classroom), from another child who actually earned the praise. They're not making the connection yet between good behavior and praise; they just know those tickets are a tangible sign of praise, something that can be proudly shown off at home.

There's one more issue I want to raise here: restorative justice. We've been hearing a lot about this new approach to discipline lately, though as far as I know, no one in my school has yet received the training necessary to implement it. The research appears to be sound, though: children who are suspended from school for being disruptive get into a downward spiral that, once they leave school (often by dropping out), disproportionately lands them in prison. It's best to keep them in the building, ideally in the classroom, though I don't believe my school currently has enough support personal to make that possible without giving up a good deal of instructional time. The irony of the school-prison connection is that engaging in petty larceny with thank you tickets comes uncomfortably close to dealing in cigarettes. Some of these children are already acting like they're in jail, dealing in the very tokens that are supposed to be teaching them how not to end up there.

For my part, I'll keep handing out thank you tickets, though I'm going to start stamping them with the Chinese "An" symbol that is my family's coat of arms. It's not just that it symbolizes the tranquility I seek for myself and my students; it's also a hell of a lot harder to forge than my messy initials.
extrinsic motivation PBIS poverty restorative justice Title I
Location: Margaret Scott Elementary School, 14700 Northeast Sacramento Street, Portland, OR 97230, USA