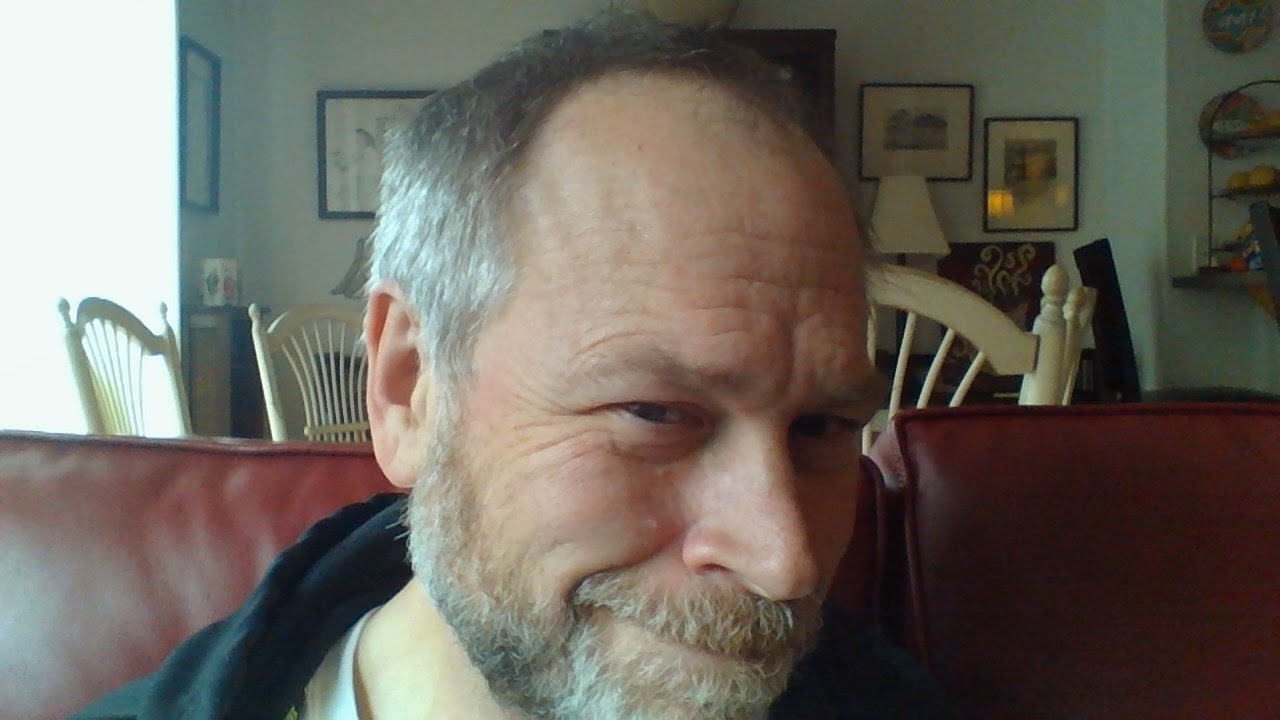 The silver hairline of a 54-year-old. The wrinkles came with the package.

Happy birthday to me! Cha-cha-cha.

Waking up at 5:00 is handy for getting to school on time. It's not as helpful for getting a full night's sleep. This morning when I could have slept in--it's Spring Break, and it's my birthday--I was wide awake at 5:00. My body clock is stubborn in that way, something I attribute to my age.

I spent a few minutes snuggling with Amy, then eased myself out of bed, put on my sweats, and headed downstairs to start on my birthday breakfast: pancakes with maple syrup. Normally I add blueberries to the mix, but I forgot to stop by a supermarket yesterday, so I settled for sliced bananas and the chopped macadamia nuts that were a present from my mother. By the time Amy came downstairs, the last of the pancakes was on the platter. We were able to eat together, and then she left for her BPA note-taking job in Portland. I took Sarah to the gym for Body Pump, then brought her home, and while she went out with a friend, busied myself with reading the last His Dark Materials novel, then struggling through the first movement of Beethoven's "Waldstein" sonata. I've spoken to both my children and my mother, corresponded with many friends on Facebook, and am now writing. If the weather clears up, I'll get on my bike for an hour. Tonight, I'll take Sarah and Alex into town to meet up with Amy for dinner at the Bazi Bierbrasserie, a Belgian gastropub in the Hawthorne District. By the time we're home and in bed, it will have been a lovely birthday, productive, pleasurable, and fitting for a man of my years.

That part feels off. When I was in my 20s, I thought of the 50s as being over the top and heading back down toward retirement. Men in their 50s took naps, lived in houses that were in serious need of downsizing, were starting to be grandparents, and were counting the days until they could hand in their ID badges and start drawing pensions. I also found them to be distrustful of my youth. What could I possibly have to say to someone with three more decades of life under his belt than I had? I found myself insisting that I knew what I was doing, that I had studied long and hard to be where I was as a theologian, and that if they could just get over their ageism, they'd be amazed at my insights.

Looking back from the other side of that divide now, I'm amazed at how insufferably naive people in their 20s can be. Is this what it means to be middle-aged? To sit in constant, curmudgeonly judgment of the young?

I hope not. Reinforcing that hope is the feeling I have whenever I catch sight of myself in the mirror: That can't be me. I don 't feel that old. I must be under an aging spell. Those can't be my wrinkles, my receding hairline, my silver hair. It's all some cosmic misunderstanding. Why, I don't feel a day over...24?

That is the perversity of identity: I feel like the same youthful preacher who couldn't get the 50-somethings in his congregation to take him seriously. And yet, my body knows I've aged. I may be a fit 54, gradually working myself back into the best shape of my life, but my feet know better. I'm having a renaissance of running, working toward my first races in fourteen years, but it's on my older body's terms: I can't run two days in a row. I've got so much to think and write about, but as soon as I'm on the couch, my eyelids start to droop. When I taste exotic foods, I find myself comparing them to all the other foods I've tried, so that nothing really tastes completely new to me.When I dream about the many places I want to go, it's with a tinge of desperation: time is running out. Yet that is tempered by another sense, that however alien those places might feel, I will always find much that is familiar about them, because I've learned from experience that humans the world over are more similar than they are different.

All these insights are appropriate for a man of my age. Realizing that, I can tell the 24-year-old trapped in my head to stop screaming at the mirror: I'm not the same ignorant, insecure, defensive naif. I really do know things now that I didn't know then, and I know them deeply, down to the bone.

The one clear reason I can see for this age confusion is my current career. Despite being 30 years removed from my masters degree in music education, I've really only been teaching in earnest since 2003. The teachers with this level of experience in my school seem young and fresh to me because they are young and fresh: they're 30-somethings who are still having babies. The teachers my age, on the other hand, are veterans who've seen it all, done it all, and, true to my 24-year-old perception of people in their 50s, are preparing for retirement. I'm an anomaly, a middle-aged man with a younger man's resume. I'm still encountering classroom phenomena that are new to me, just starting to understand how, regardless of cultural trends, children haven't really changed all that much. A 10-year-old now is going to have tastes utterly in keeping with a 10-year-old of 1985. It's an awareness I would have come to in my 40s had I not abandoned teaching when I was 24.

I've been bouncing back and forth between 20s and 50s in this post, which is wholly appropriate because this post, like all the essays in this blog, is about finding myself in this age of transition. And that's the note of hope I'll end on: the gift of passing through so many life changes is that I can look forward to a career that, far from wrapping up, is just picking up steam; to a marriage that is still filled with newness and surprise; to exploring new places, new pastimes, new experiences that I postponed when I was younger because I was too busy dealing with the traumas of my 30s to have time for. I may still need to nap like other men of 54 (and have, several times, during the writing of this essay), but I don't have to look at the world with the disillusioned, weary eyes I see in the faces of those others.