Weeping through My Pores 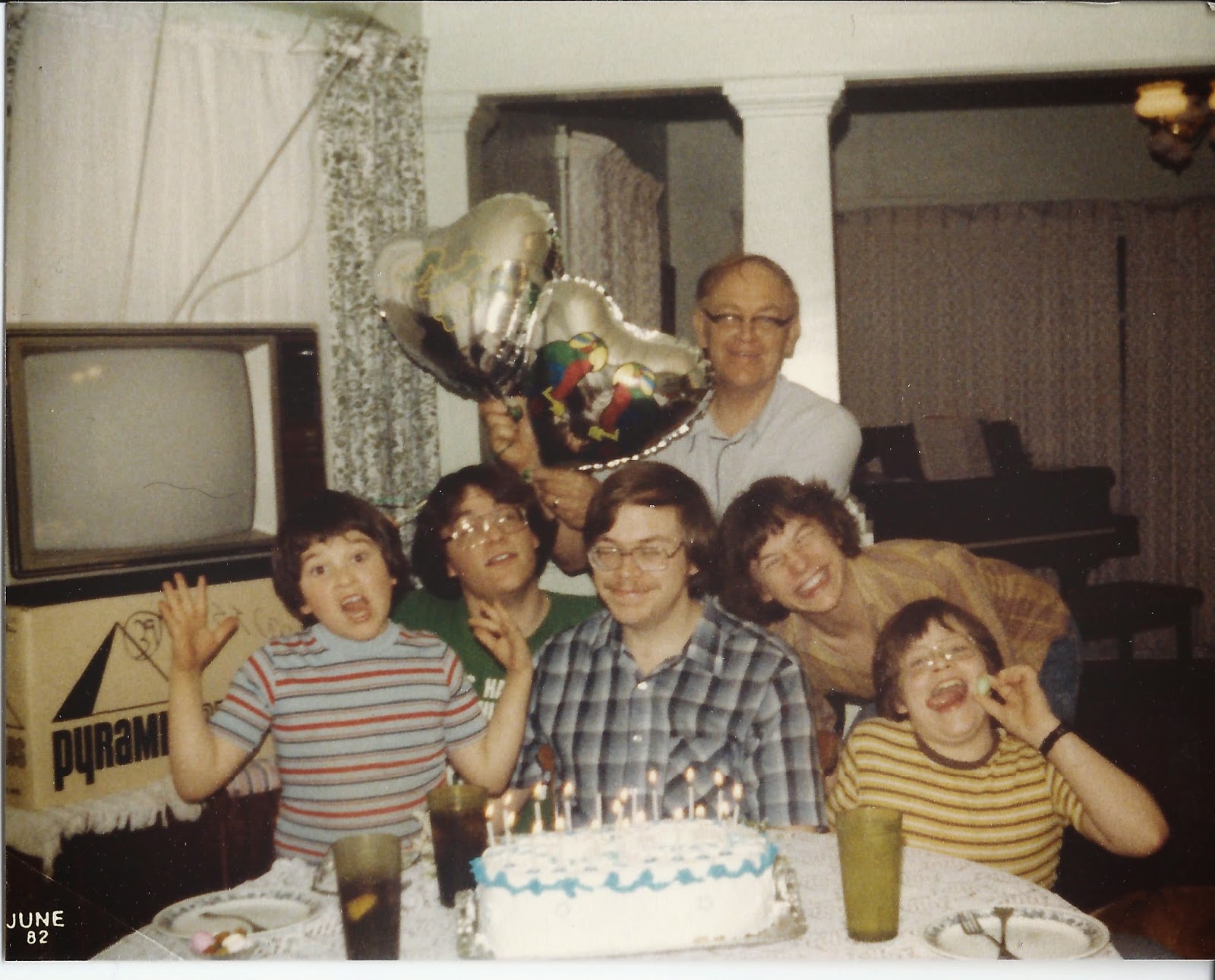 The one who's not smiling is me.

The date was March 24, 1982. It was my 21st birthday. I was home from Willamette University for Spring Break (my birthday has always coincided with Oregon's Spring Break week), and gathered around me was my entire family. Mom had prepared my favorite cake: angle food with seven minute frosting. There were balloons, gifts, iced tea, and enough goofiness to life anyone's spirits--except mine. The reason? Just a few days earlier, I had awkwardly confessed my love to a classmate, who had gently told me that, as much as she valued my friendship, that was all we would ever have.

I cried more when I was a child, and as a teenager, I would occasionally lock my bedroom door, throw myself on my bed, and sob into my pillow. The reason was usually a deep sense of loneliness: while I had friendships in Philomath, I wasn't sure how to deepen them, and really had no one to hang out with outside of school hours. This was an essential part of my teenage years that wasn't fulfilled until I was at Willamette, and found myself part of a close community of friends, the breaking of which on graduation day had me crying all the way home in the back seat of my parents' car.

Disappointments could hit me especially hard. The evening I lost the election for Master Councillor of my DeMolay chapter, I was inconsolable. On arriving at home, I went to my room and sat on my bed, sobbing quietly. After a few minutes, my father came into the room, sat down beside me, and put his arm around my shoulders. He'd known more than his share of defeats and disappointments, and I could tell his empathy was genuine.

This may be giving the impression that I'm a weeper, but in fact, I can go for months without crying. It takes a major dose of heartbreak or stress trigger tears, and usually I restrict myself to a sob or two before collecting myself and wading back into whatever task is before me.

My father, on the other hand, told me many times that he envied my ability to weep. He just didn't have it. I'm sure part of it was his upbringing--men of his generation were a stoic bunch, not given to displaying any signs of grief or admitting weakness in any way--and the rest was probably the Swedish cultural expectations communicated to him by my grandfather. Swedes are a reticent people, holding their passions tightly to their chests, maintaining an almost elvish composure in times of both joy and sadness. Their word for this personality trait is lagom, and it sums us up to a tee. Most of the time, we just don't feel the need to emote. Those feelings we might share are implicit: of course we're hurt by that slight, of course this trauma frightens us, of course we're sad at the passing of this loved one. Everyone knows it, so why wear it on our sleeves? We're fine in the company of others who possess this quality, but problems arise when we deal with someone who has a more volatile temperament, and may mistake our stoicism for not caring.

That was probably one of the main reasons my father struggled to connect to his congregations: people wanted more extremes to his emotions. I knew he felt these things, just as I do, but expressing them was not easy for him. It's not for me, either, and like Dad, I had trouble during my pastorate communicating my emotions outside of the pulpit. Given time, I might have forged some deeper connections, and did in a few cases; but convincing an entire church membership that I felt these things, especially the extroverts in the congregation, was a struggle for me, as it was for him.

I wept a lot on Monday, the day Dad passed away. It was cleansing weeping, and I didn't feel at all stuck in my sadness--a fear I had in my 30s, when work stress and divorce could put me in a depressed state that felt like a prison cell. I wept from guilt that I hadn't been able to truly talk to my father in several years, from regret that I would never have the chance to correct that, but also from the sad realization and acceptance that I probably could not have accomplished such a conversation, no matter how hard I tried. Dad was ready to go. His intellect has been fading for years. The few interactions we had on Sunday--mostly him expressing concerns about how the family would perform our traditional rowdy rendering of "The Twelve Days of Christmas"--were as engaged as he was able to be.

Since Monday, I've misted up a few times. I will probably have my share of tears next Saturday, during the memorial service. For the most part, though, I think I've cried out all the toxins I need to through my tear ducts. That doesn't mean I'm not weeping, though. Tuesday at Body Pump, Wednesday and Thursday at spin classes, and in a few minutes as I take my first run since before the holidays, I'll be weeping through my pores.

It's something I discovered during my first divorce: when it comes to cleansing my body of the toxins generated by stress or grief, intense exercise works as well for me as crying. My mind roams freely during exercise, often dwelling on whatever is troubling me, but rather than weep it out, I sweat it out. (I also vent ample quantities of moisture through my mouth and nostrils, an admission which, while probably true of any endurance athlete, is a secret we generally keep from the less fit masses who are likely to respond with "Ew!") Every time I got up on the pedals for a hard push, I could feel the bereavement pain welling up from my core, feel the pressure to let it out in tears and sobs. Instead, I pushed it through my legs, my arms, my lungs, panting, gasping, perspiring. The end of the workout was much like the end of a good cry: I felt lighter, relaxed, ready to continue with my day, my soul unburdened of all that had been pulling it down.

Grieving in this way has carried me through some very hard times: divorces, breakups, job loss, involuntary separation from my children, and on and on. As long as I'm still exercising, I can vent all the stress and sadness I feel on the trail, in the gym, atop my bicycle, and when I'm done, it's so much better.

I think my father practiced this to some extent, but not as much as he would have liked. For his generation, exercise was something one did to accomplish some other goal. One walked to get somewhere, or to give the dog a bathroom break. More extreme exercise might be prescribed to improve one's health, but not as an emotional or spiritual enhancement.

At the conclusion of the last four of my seven marathons, I found myself, as I neared the finish line, beginning to sob. Throughout the four-plus hours of each of those races, I had meditated, wrestled, fought with inner demons, breaking each of them down and pushing it out through my feet into the road, and through my pores into the air around me. Now, as the end was finally in sight, I had one last bundle of pain to vent, whatever was left over from the 26 miles that had come before. Vent it I did, tears streaming down my face, moans accompanying each gasp. Wrapped in a mylar blanket, a finisher's medal around my neck, I would find a tree to lean against as the pain and relief billowed from my lungs. With that done, I was ready to limp over to the food table and start replenishing my empty energy reserves with bagels and bananas, washing it all down with Gatorade.

I could go on much longer about this sweat-grief connection, but it's high time I put on my shoes and headed out on a run.
Elam Anderson exercise grief sweat
Location: Portland, OR 97229, USA