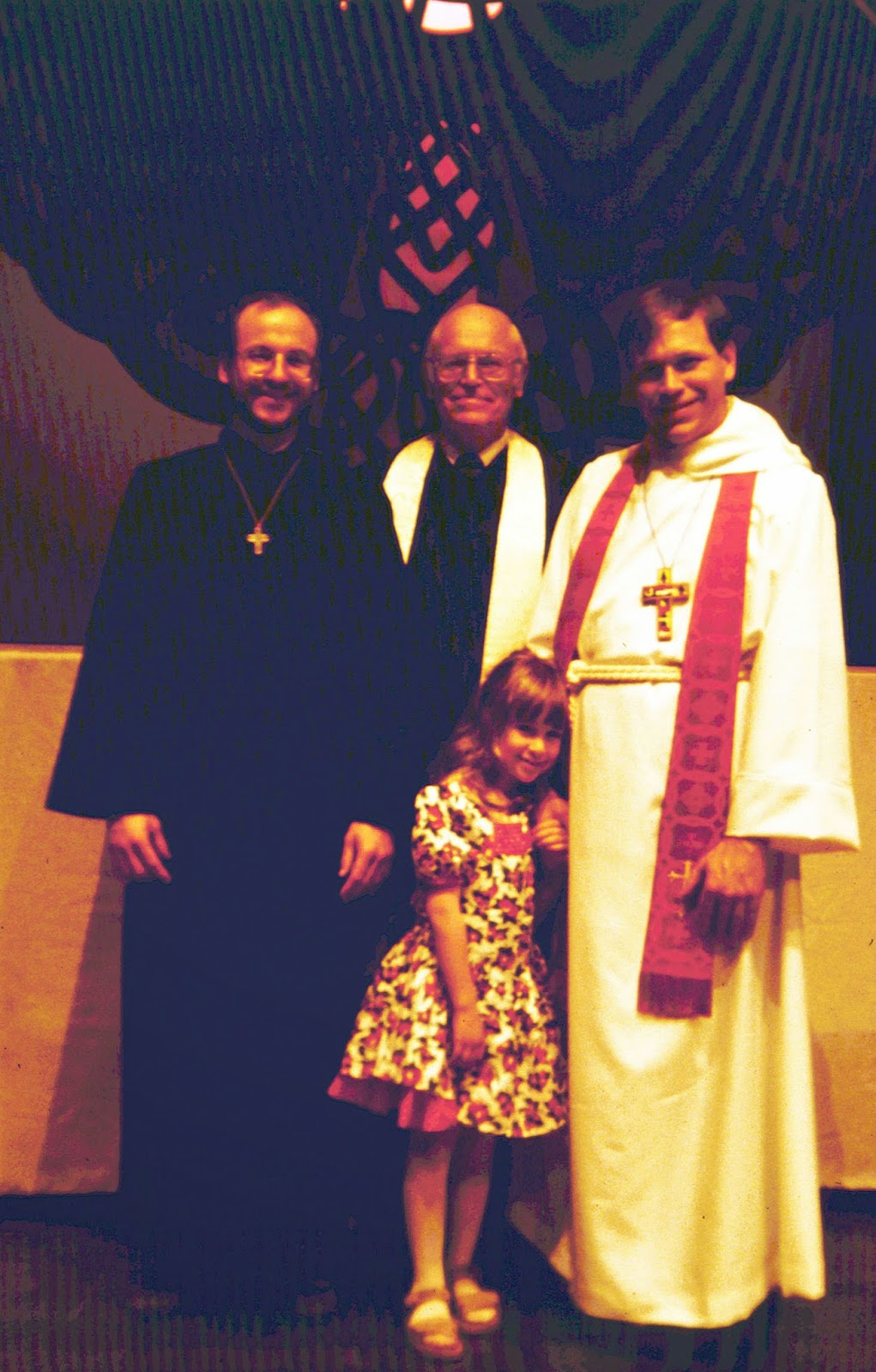 It took me ten years to get here.

June, 1995: a moment of victory, acclamation, as the Oregon-Idaho Annual Conference of the United Methodist Church finally welcomed me into full membership as an elder, a fully ordained minister, with all the rights and responsibilities thereunto appertaining. I had worked so hard to reach that point at which the Bishop, my District Superintendent, my father and one other elder of my choosing, and my daughter (in lieu of my soon-to-be-ex-wife) laid hands on me, I placed my hand on Jason Lee's Bible and took the vows of ministry, and my father's red stole was placed around my neck, that I should have felt overwhelming joy. I made it! A life of faithful service lies before me! I will never again have to worry about hunting for a job!

The fact that the last celebration topped my list is a hint of where that career was headed.

Before I get to that, though, I have to talk about several other things that made this moment far more bitter than sweet.

Let's start with the superintendent. I became the pastor of the Estacada United Methodist Church in July, 1992, two months after my son nearly died at birth, one month after my father suffered a heart attack, and just weeks after my wife and I took in a troubled teenager. The year before that had been a hell of an introduction to ministry in the real world: both of us appointed to the church in Medford, serving under a senior pastor whose mood swings and triangulation set our marriage firmly on the path to divorce. Estacada was an hour-long commute from our new home in Sherwood, and I was also serving a 1/4-time appointment at a church in the Lents neighborhood of Portland. Coupled with my never-ending doubts about my faith, this was all a recipe for depression, and I got it in spades. The Estacada people saw this, but thought they could help, and recommended I get some counseling. They also asked, in response to the Bishop's annual survey, to have me back for another year. The superintendent, also brand new that year, thought he knew better, and went to work on having me essentially laid off. I managed to change his mind by embracing counseling, agreeing to give up Lents but stay 3/4-time in Estacada, and throwing myself into ministry, but he never let up on the intense scrutiny. In April, 1995, after initially recommending me to the Board of Ordained Ministry for full membership, he changed his mind, leading to a two month battle between the Board and the Bishop's Cabinet. The night before Conference officially began, both he and I met with the Board. After his interview with them, he slammed the door on his way out of the building. They were much gentler with me, chose to sustain their decision, and rather than have the fight move to the floor of the conference, the Cabinet agreed. Two of the people laying hands on me that night did it under protest.

Now let's turn to that sweet 6-year-old. A year before this night, I had stood proudly at an ordination ceremony at which my wife became an elder. I had looked forward to having her return the favor the following year. That didn't happen: our relationship had already been souring, and by December, it was completely on the rocks. By June, we had filed for divorce. So my little girl took the place of the spouses who stood with every other ordinand, including my brother Jon, who became a deacon that same night. What was supposed to be a moment of cementing our mutual calling was, instead, me entering a life of solitary ministry.

It was my baptism all over: the heavens remained stubbornly shut, the dove never left its covey, and the voices welcoming me into my new state of grace came from two men I neither respected nor trusted.

The bad seed of that night germinated poorly. I remained in ministry for four and a half more years, struggling all along with whether it was right for me. I felt in some ways trapped--I had student loans, credit card debt, a car to pay off--and couldn't see any way out of this work that didn't include bankruptcy. I think it was concerns like these, as much as the loneliness of rural ministry as a single father (two weeks after conference, I moved from Estacada to Amity), that caused me to rush into a second marriage which, true to type, also ended in divorce.

Much more than these difficulties, though, what really chased me out of ministry was losing faith in the few things that remained sacred to me after seminary. As I explained in my last post, seminary taught me to demythologize and unsentimentalize Christianity, reducing it to a kerygma that could not warm the heart of any but the most intellectual and theologically advanced parishioner. Using this tool set to lead Bible studies, I had seen many of my students have "Aha!" moments as they discovered a deeper, more honest way of reading scripture; however, I had also seen a few collapse in despair as the dogma that kept them faithful was debunked. In truth, my own faith had been stripped of every molecule of padding, to the point that it really was nothing more than a theological platform from which to view the world.

What still gave me comfort as I left seminary was my faith in two things: marriage and the church.

As I noted above, marriage had abandoned me six months before my ordination. The church, on the other hand, had been working on its divorce from me from the moment my first wife and I arrived in Oregon. Between the year in Medford and what ultimately turned out to be six years under that superintendent, I had all my faith in the goodness of the Oregon-Idaho Annual Conference, its Bishop and superintendents, United Methodism, and ultimately in Christianity ground out of me. By 1998, when I finally had a new superintendent, there was little left for her to work with.

Arriving at my final appointment in July, 1999, I knew I was ministering on borrowed time. This position--music minister at a suburban church--was make or break. If I couldn't find the inspiration to rock this job, I should take myself out of it, find something else to do with the rest of my life.

The day before I was to start at this new job, my second wife asked for a divorce. The job lasted until January, when the church put my career out of its misery by placing me on disability leave.

I went to seminary in 1985 hoping to shore up my faith, to find a way for my probing mind to experience God without gagging on sentiment or scoffing at contradictions. I left seminary with those aspects of religion boiled off, but there was little left without them. Most of my preaching as a pastor was aimed at questions and concerns I had. In the end, however powerful my arguments, I could not convert myself. It was time to leave.

But where could I go? What faith community could provide a safe haven for one so scarred as me? My first wife invited me to worship with her congregation, which would give me more time with my children; but that place felt sterile to me, and the sermons never dug as deeply as I wanted them to. That was not a place where I could share my inner struggles and find healing.

Fortunately for me, there was a place for me, an island of misfit Christian toys that embraced all manner of former congregants of one variety or another, people who had been rejected by or walked away from churches that just weren't right for them. That place was the Metanoia Peace Community, where I didn't just come to worship. I moved in.
agnosticism Board of Ordained Ministry faith ministry ordination
Location: Portland, OR 97229, USA