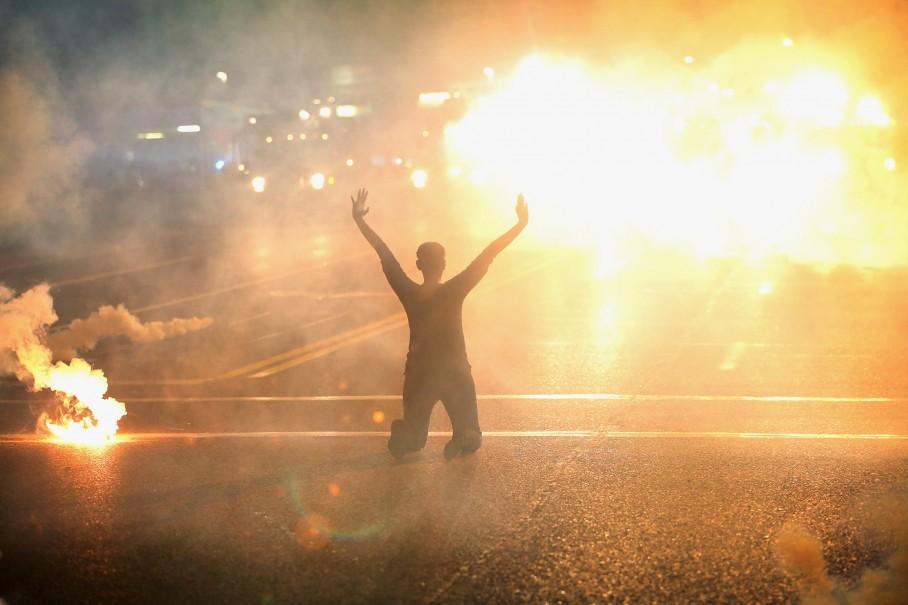 He was barely more than a child.

Michael Brown was 18, just days from starting technical college. He'd been in trouble, off and on, throughout his short life. He played pranks. He shoplifted. He roughhoused. And a few weeks before he was shot to death by a police officer for jaywalking, he had a religious experienced inspired by seeing the sun break through the clouds over Ferguson.

He was barely more than a child.

Most of my teaching experience has been with elementary aged children, but I've had a few years in middle school and high school settings, enough to see the continuity of development across the age spectrum. The earnestness and enthusiasm of the very young grows into the passion of young adulthood; at the same time, the seeds of prankishness and irony can be manifested as early as kindergarten. Teenagers, I've learned, are just big kids: passionate, sensitive, fixated on inconsequentials, worried about their friends and families, narcissistic, generous, sweet, innocent, everything I see in my small students, coupled with a larger vocabulary, a broader knowledge base, and full-sized bodies. Acting on their immature impulses, they are often unaware of just how irritating or frightening they can be coming out of someone who is six feet tall and weighs more than 200 pounds.

Michael Brown was all of that, and black. Officer Darren Wilson, on the other hand, was a white cop policing a black neighborhood when he saw two teenagers strolling down the middle of the street like gang lords. He challenged them, there was some kind of scuffle, and in the end, six bullets went into an unarmed teenager, ending his life.

Protests began that night. The police department cracked down with urban assault vehicles, tear gas, and riot gear. The protests became riots. The national guard had to take over policing for a time. A grand jury was assembled to weigh the evidence against Darren Wilson, and Monday, chose not to indict him. More protests and rioting ensued, including the burning of several buildings in downtown Ferguson.

Opinions on what happened, who was to blame, what it tells us about American justice, how the grand jury system is broken, and more aspects of this situation than I can list can be found with a simple Google search of "Michael Brown," "Ferguson," or "Darren Wilson." It's not my intention to add another analysis to this chorus. I don't feel qualified to render an opinion on the grand jury's decision, on the toothless civil rights law, on the state of race relations in greater St. Louis, on the militarization of American police forces, or any of the other issues this tragedy raises. My aim in this essay is, rather, to look at the tragedy of a young person being called for acting his age.

I see it in my classroom every day: children testing limits, seeing how much they can get away with, pushing against boundaries, trying out new behaviors, telling jokes, teasing each other--all part of growing up. Some go too far, and it's my job to get them back on the acceptable side of the boundary. There's rarely any malice apparent in this kind of play, and most children are quick to change what they're doing when reprimanded by an adult. If it weren't for the disruption, I'd find much of what they're doing charming, amusing, even cute.

As they get bigger, it becomes less cute, but the motivation is still the same: learning how to behave. Maturation brings more reasons for adjustment: larger bodies, sexual development, hormonal mood swings. The longing for approval, on the other hand, is a constant, though the object of that longing changes over time, shifting from adults to peers.

One day in my high school band job in Banks, I was eating lunch in my office. Students were allowed to eat lunch in the band room, and as I relaxed in the office, I sometimes overheard their conversations. One day I became aware of a phone call being made that seemed somehow off: the student making the call had affected a "nerdy" voice, and was asking questions of a customer service representative. Finally I got it: he was making a crank call, to the great amusement of his peers. I walked out of my office, and the call ended abruptly, every teen in the room suddenly blushing. "I'd rather not hear any more calls like that being made in my classroom," I told him. And I didn't: if he made anymore, it was out in the hall.

Pranks like this are the natural extension of the silly behaviors I see in my elementary music room every day. Michael Brown was the same age as the student making that call in the band room at Banks. Just before he was shot, he and his friends had engaged in some aggressive behavior at a convenience store, possibly shop-lifting a box of cigars. After this bit of petty misbehavior, they were walking in the middle of the street, laughing and playing like teens around the world. If they'd run into anyone other than a police officer, there probably would have been scowls, maybe a cross word. No adults would have to get out of their way, as adults know enough to stay on the sidewalk. Cars coming down the street would slow to avoid them, the drivers most likely shaking their heads, perhaps calling an obscenity out the window. The boys might have returned the gestures and words, but at worst, the driver would have experienced some inconvenience.

But that's not what happened. The boys encountered a police car, and one of them died because of it.

This is the tragedy: a boy was murdered in cold blood not by a criminal, but by an officer of the law, just as he was on the verge of graduating to a career path that could have kept him out of trouble long enough for him to outgrow the recklessness that all children engage in to some extent. The racial side to the tragedy is that, had he been a white teenager, he might have received a tongue-lashing from the officer, but would still be alive. Being black, though, Michael Brown never had the chance to blushingly step back up on the sidewalk, hot tears of embarrassment running down his cheeks, humiliated but still alive.

This story has been told too many times. The authorities whose job it is to protect and defend seem best able to perform this function in privileged suburbs like the one where I live. In Beaverton, children can be encouraged to seek help from a police officer. In inner city and suburban neighborhoods of color, on the other hand, children are taught to treat police like rattlesnakes: stay away from them, and if you catch their attention, please, for God's sake, don't give them any reason at all to find you threatening.

Those are my thoughts, then: no diagnosis, no prescription, just sadness. I will end with the one note of hope I can find in this tragedy: as demonstrations spread across the United States, it appears the communities that have most suffered from police violence have finally had enough. If the rest of us add our voices, perhaps together we can demand that police in every community remake themselves, dismantling the paramilitary structures that have proliferated since 9/11, forswearing the racism that is integral to their self-perception, and embracing the words that define their highest calling: officers of the peace.
Darren Wilson Ferguson Missouri Michael Brown peace officer police
Location: Portland, OR 97229, USA