As I wrote in June (see "Coercing God"), I have some problems with prayer. That entry was mostly about the ineffectiveness of the practice, the way in which it extorts favors from God, and in the process casts an unflattering light on the deity. If God is all-powerful and all-loving, then suffering should cease to exist. If, on the other hand, God is all-powerful but only alleviates the suffering of those who pray or are prayed for, then God is a mercurial despot unworthy of praise. Since suffering is all around us, we can infer that God cannot be both all-powerful and all-loving; that, in fact, if there is any God at all, this deity either has limited power or has a cruel personality. In the face of such logic, one has to ask: whither prayer?

Sunday morning, the church where I have been playing the piano for three years (and for the next month, after which I'm letting go of that job, but that's a story for another blog post) had a lay-led service. The pastor was away for a conference, and rather than bring in an ordained guest preacher, he recruited three members of the congregation to speak on the theme, "In God we trust." All witnessed movingly, telling personal stories about their struggles with faith, and how those struggles taught them they can rely on God. I found the stories powerful and effective, moreso than many professional sermons I've heard in my life. I also cringed at the theology.

Now, before you go rushing to their defense, reminding me that these were not seminary-trained theologians, let me just say that the theology behind these messages can be found in many an ordained minister's Sunday sermon. And I would cringe just as much if I heard it from someone with a DMin (as I have, more than once). The message, for each of them, came down to this: God's in charge. Sometimes bad things happen to us or to the people we love for reasons only God knows. And God is there to comfort us after our loss.

I could see that all three of these speakers were absolutely sincere about what they were saying: that God doesn't give us anything we can't handle, and with God to hold our hand and hear our prayers, whatever has happened can be overcome. I was even a little envious of the faith they had in this God who, with one hand, would take away a woman's child, and with the other hand wipe away her tears. But as I said in the first paragraph, that's not a God I can believe in, however comforting that belief might be to some. That God is a psychopath. And pray to such a cruel deity? Really? "Dear God, please save this person, even though you took my little girl away from me when she had the same illness. And thanks for the lollipop."

The sermon at this church is followed by the offering and then a prayer time. People offer up prayer requests, usually someone they know who is ill or grieving, or something that's in the news that has them worried. The prayers, when they come, are handled with more finesse by the pastor than by a lay leader, but they come down to the same thing: "If it be your will, O God, grant that _____ may be healed of _____ and that _____ may overcome _____; and help our leaders to understand that _____..." And so on. It comes down to that power-love equation again: Does God have the power to do any of these things? And if so, does God love the world enough to go ahead and do them? And if so, does it really make sense for us to be asking God to do it? Wouldn't a loving and powerful God just do such things, whether or not anyone prayed for them? Would God reject a prayer, however worthwhile, that lacked fervency, or wasn't prayed by enough people? If so, what does that say about how much this God genuinely loves the world?

You may see by now where this is heading: I just don't see the point to prayers of petition. As a theologian, they make no sense. As a human being with a scientific approach to the world, my own experiments with prayers have had mixed results that could easily be explained away as coincidence. Sometimes my fervent prayer for a particular outcome appears to have been answered. At other times, the profundity of my yearning, fully channeled into prayer, has actually deepened the pain that ensued when those prayers were not answered.

But wait! What about prayer as communion with God, or the ineffable, or whatever else it is that brings deep meaning to one's life? The only way I can answer that is: got me there.

This rant is not about meditative prayer, in whatever form it brings tranquility and meaning to your life. It's about petitionary prayer, prayer for specific outcomes, and even prayer for God to just be present in another's life. I have concluded that such prayers are a waste of time and energy.

I will acknowledge that it is a good thing for a faith community to know what is weighing on its members' hearts, and to know the names of those in the community in need of care. Sharing such names during a service seems practical and helpful. I will also admit that prayerfully meditating as a group can work wonders for the unity of a community, and may even have healing power. Where I draw the line, though, is at asking God to do something: to go out and find the missing person, to step in and right the wrong, to heal the broken limb, to cure the terminal disease, to reconcile the estranged partners, to nudge the human resource department to grant the job to the fellow church member rather than some other equally- or better-qualified candidate.

There have been times in my life when I have prayed deeply for nothing but a sense that I am not alone in my suffering, that my loneliness is not the be-all and end-all of my existence; and at such times, I have found myself sinking into a sense of connection with whatever grounds my being and becoming. Some would call this God. I am of the opinion that to call it God is to ascribe to it the power-love conundrum, which is at best misguided and, at worst, self-abusive. I am through with asking God for outcomes. But I am not through with communion. 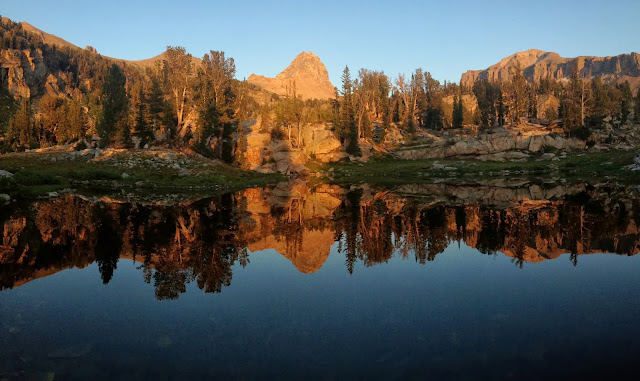 Gazing at the sunset-tinged reflection of Buck Mountain in the unnamed alpine lake where we pitched our tent on our last day in Wyoming, I felt my heart opening, felt my spirit blending with the wonders all around me. I felt, in a word, blessed. I felt intense gratitude for this blessing, and I offered up a two-word prayer to the Creator: "Thank you."

If I come back to theism, it will be for this reason, and no other: the love, the joy I experience in the world, in my fellow human beings, in the Cosmos, tells me that, for all the suffering around me, Creation is at its heart a good and wonderful thing, a thing to be enjoyed, celebrated, praised. It is far from perfect: the praying mantis is also a preying mantis, hunting down other insects and slaughtering them; and most of the natural world operates by the same principle. Everything dies, and even though in dying it becomes sustenance for that which goes on living, it dies, just the same.

So I will not pray for an end to dying. But I will share in communion with that which set the Cosmos in motion, and which empowers this crazy thing called life. Our world is harsh and cruel, and awesome and beautiful, all at once. And I am blessed to live in it.

Thank you, whatever you are.