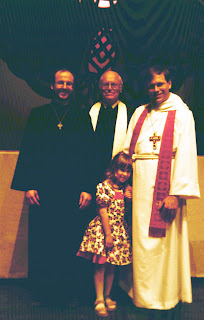 I spent ten years working toward the moment chronicled in this photograph, my ordination as an elder of the United Methodist Church. I was in the midst of my first divorce, so instead of my wife standing with me, it was my daughter Sarah, six years old and just out of kindergarten. My father was one of two elders I chose to lay hands on me, the other being my mentor, Ernie Bell. My brother Jonathan was ordained a deacon at the same service.

I worked hard to get to this moment. I relocated to Dallas to attend seminary, to rural Illinois and suburban England to hone my skills, sweated over volumes of theology, wrote reams of papers, marched myself into hospitals, nursing homes, and living rooms, forced myself to learn new skills for dealing with people passing through the highs, lows, and far-more-frequent mundane middles of life. I taught myself to leave my sermon manuscript in the car, on the computer, and ultimately, not even to write it out, because I knew that I, as a congregant, far prefered spontaneous preaching to the readings most pastors performed. I subjected myself to meetings with hostile parishioners, irrational senior pastors, and a skeptical superintendent who made a project of trying to get me to quit. The first time I went before the Board of Ordained Ministry seeking elder's orders, I was nearly discontinued, but meeting me changed the minds of many. When I returned for the second time, ten years after starting the process, despite being in the early stages of a painful divorce from my already-ordained first wife, the Board saw growth and strength in me, and recommended me for ordination. The Bishop's Cabinet chose to do something unprecedented, and challenged that decision. I had to face down the superintendent in a heated meeting at the conference office, then appear before the Board three days before the service. They stuck by their decision. The other two hands laid on me at that service were the Bishop and superintendent who had fought, just a few days earlier, to keep it from happening.

So I had it: I was an elder, a member in full connection of the Oregon-Idaho Annual Conference, with a right to demand full-time employment for the rest of my working life, unless at some point I committed an egregious ethical offense. And already that night, as I kneeled with the reluctant hands of two men for whom I had no respect on my head, blessing me with words they would much rather not have had to say in my behalf, with my daughter standing beside me rather than her mother (whom I had dreamt for eight years of filling that role), I was on my way out.

I spent three more years struggling with the same superintendent. I remarried, and over the course of a two-and-a-half year marriage, changed houses twice. Every Sunday I worked to proclaim something challenging to congregations that, given the choice, would rather have been comforted. I was a sporadic visitor, at best, good in a crisis, but miserable when it came to the everyday task of calling on people for the small talk that is so vital to building relationships of trust. I hid in my office, spending far more time than I needed to prepping for sermons I could easily have improvised, crafting finely-tuned services when simply repeating formulas would have been welcomed. These people did not want cutting-edge liturgy or advanced Biblical hermeneutics. They were old and tired, and they wanted me to hold their hands, both literally and figuratively, and tell them it would be all right.

After four years in rural Yamhill County I took my final appointment, to a more urban setting as Associate Pastor and Minister of Music. The day before I started, my second wife told me she wanted a divorce. This threw me into a state of grief my new church found uncomfortable. After six months, they requested that I be placed on disability, and keep my distance from the church.

I accepted disability because I had nowhere else to go. I didn't feel disabled. I was grieving, questioning, uncertain what to do with myself, but I had weathered far worse depressions, and emerged stronger, more self-aware, eager to step back into the fray. Now I was simply cut loose.

It's significant that at no point in this autobiographical sketch have I mentioned God. In retrospect, I can see that what faith I had was in the United Methodist Church--and in my first marriage. My favorite scriptures were about people wrestling with their faith, something I had been doing for most of my life. I preached many times about Thomas, who had to see and touch before he could believe that Jesus was alive, and was chided for it, not because I believed there was anything wrong about his doubt, but because I so identified with his insistence on proof. I believed in love, in two very different people working together to transcend their differences and create something greater and stronger than either of them could be individually; and I believe in the church as a place in which an incredibly diverse people, representing a vast spectrum of ideologies and backgrounds, could come together to do great works for the benefit of the whole world.

That first marriage turned out to be a false idol, an image graven in naive romanticism and empty hope. And the church, I came to see, was very much of this same world, driven by petty power-hungry technocrats to preserve clergy privilege and enshrine the bigoted opinions of a backward majority. The end of my second marriage, and the collapse of my churchly support network, reenforced all that disillusionment.

Looking on from the outside, I have seen much that grieves me in the institution I once held so dear. Time and again, I have seen church officials who espouse belief in full inclusion for all people (meaning, in this case, the ordination and right to marriage of gay men and lesbians) create elaborate work-arounds to the backward rules of the Discipline, rather than endanger their own precious power by simply refusing to enforce those rules. I have seen clergy whose professional and personal ethics are questionable at best promoted up through the ranks for purely pragmatic reasons. The heart of United Methodism is preserving its "unity" at all costs, protecting its dogmas of the special rights of the ordained and the peculiar institution of the itineracy, even as churches shrivel on the vine, desperate for new, young members who want nothing to do with an institution that has shut itself off from the future.

It's not as if I wandered off into a arid spiritual desert. I have found other pursuits that feed my hunger for spirituality and connection far better than the church ever did or could. In the red rock desert of Utah, I have found works of transmillenial art that move me far more than any cathedral ever has. Here's one I have journeyed to on pilgrimage four times: 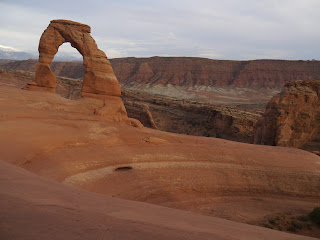 It took millions of years for geology and meteorology to create the Delicate Arch. Now, it does feel at times like it may take millions of years for the United Methodist Church to wake up to its own inadequacies, but that's an apples-and-oranges kind of comparison. Human beings don't live for millions of years. As much as I have come to question the whole practice of ordination, I see no reason that persons far more suited to it than I ever was should be denied it simply because of their sexual orientation. The same applies to marriage. Those seeking to take either of those vows should not have to wait yet another generation for it, until the church finally gets around to acknowledging that, like slavery, it's been on the wrong side of this issue from the beginning.
But that's a tangent. My point here is that in the thirteen years since I left active ministry I have found myself fed spirituality by sweating in beautiful places: Utah, the California redwoods, the South Sister, Skyline Drive. My longing for community has, similarly, been filled in less ecclesial ways: the Metanoia Peace Community (which, it could be argued is more a church than any of those brick buildings I once worked in), marathoners gathering at the starting line, my classroom, ComedySportz﻿. Making music, filling up on beauty, laughing with fellow improvisers--these things are my worship, the ways in which I celebrate the wonders of Creation.
And what about belief? I must admit I have been in awe, over the course of my life, of the deep faith of individuals like my grandmother, many of whom I encountered during my years in ministry. Such people are sustained and strengthened by their faith, empowered to accomplish great things, to overcome obstacles and transcend limitations. By and large, though, I have found that their faith is grounded not in belief, but in relationship. They experience a powerful connection with the creative force that is the ground of all being and becoming. And no, I'm not talking about Star Wars, even if I did use the word "force." I'm talking about something ineffible and inchoate, something that radiates from the Delicate Arch, that bursts forth in the laughter of children, that envelopes a community embracing its neediest members. I used to call it God, but that word is, in my mind at least, to freighted with all that is wrong with institutional religion. I don't, in fact, know what to call it, but I do have confidence that it is real, for I have experienced it, have proven it to myself time and again, whether on the trail, in the classroom, or in the closing circle at the end of workshop.
How about that? I set out at the beginning of this essay to proclaim my rejection of faith as it is presented by the church and, in the process, discovered I do, in fact, believe in something. Preacher, evangelize thyself.
Amen.
Labels: agnostic Methodism ministry ordination United Methodist Utah