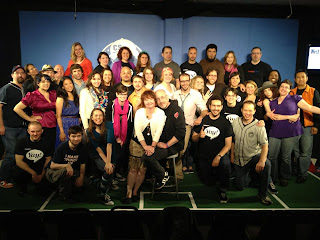 That's me in the back row, on the left, with the black-white-gray straw fedora. The rest of the people are my community, or guests of my community, Portland ComedySportz, including my true love and partner, Amy Milshtein, who introduced me to this community four years ago. CSz came at the right time for me, as the Metanoia Peace Community, my faith community since 2000, was beginning to transition out of existence. Metanoia also came along at the right time for me, as I was transitioning out of a failed marriage and a failing career. Amy and CSz arrived as I was accepting the harsh reality that my role in my children's lives, already reduced first by divorce and, since 2005, by 700 miles of Interstate highway, was, like Metanoia, shrinking to near non-existence. Through Amy, I have found myself with a second chance to parent adolescent children, the stage of my own children's lives that I mostly experienced over the phone, if at all. In CSz, I have found an outlet and an incubator for the frustrated improviser who, until now, rarely got to perform.

I have been and done many things in my 52 years. I have crossed continents and oceans, climbed mountains, run marathons, written novels, composed and arranged extended musical pieces, preached volumes of sermons, hatched, matched, and dispatched, diapered babies, earned multiple degrees, and time and again, reinvented myself to adjust to changing circumstances.

As a young man, I was insecure, shy, and easily cowed. A couple of bad experiences chased me away from my first profession, music education, before I'd really given it a fair shake. I resolved not to give up on my second profession as easily, and so, despite many discouraging words from supervisors, mentors, and parishioners, I stuck with ministry for fifteen years, finally leaving it only after it had cost me two marriages and some portion of my sanity. I could have drifted then, checked out completely, abandoned myself to this defeat, but two things grounded me: my children and Metanoia.

I lived in community with Metanoians for three years, finally moving out of the Peace House because I knew it was time to live in the same zip code with my children. I had also gone back to teaching, and while my first year back was especially difficult, I was convinced this time to see where it would take me. It took me, for a year, to a Catholic school, and for two years, on a 60-mile commute to Hood River. It took me into a relationship with another teacher, which became an engagement before ending in heartbreak--but which also introduced me to Orff Schulwerk, which showed me how the improvisation I practiced in the pulpit could be translated into a classroom, and how music could and should be a thing experienced and done by a whole person, body, mind, and soul. It took me then to Banks, a farming community with nice children, where I taught for two years before being laid off. Near the end of that time, I met Amy, the freshest start I have ever known.

This blog is a fresh start. I have thought about doing this for several months, but never quite caught the blog bug adequately. Much of my life has been marked by writings: fiction, essays, news stories, editorials, sermons, poetry, sporadic journaling. There hasn't been much lately, and its absence has come to feel like an unignorable itch. I have a lot to say about life in this century. Remember that part about being shy and insecure? I'm still shy--though I prefer to think of myself as quietly confident, a quality I hope to manifest in these words. You who read them are welcome to respond. I'd love it if you shared your fresh starts with me, as well.

May the peace that passes understanding be with us all.