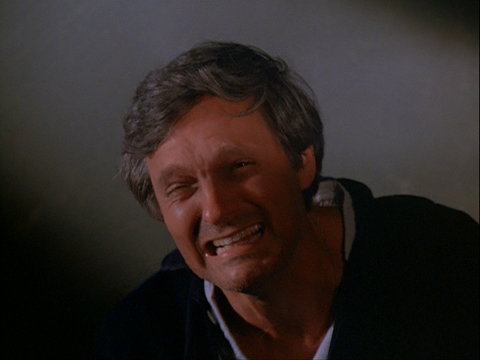 Aw geez. There I go again.

I was listening to NPR's Up First podcast, a ten-minute early morning rundown of the top three stories of the day, and I found myself tearing up. It wasn't the latest example of the Trump regime exemplifying its ABE motto (Always Be Evil) that did me in this time, though that has happened in the past--forced parent-child separations? American citizens, born in this country, denied a passport because of their Mexican ancestry and their birthplace being south Texas? And there I go again...[sniff] No, this time it was two stories about the funerals of great Americans: John McCain and Aretha Franklin. Earlier this week, I listened to a Fresh Air that played interviews with McCain from 2000 and 2005, and hearing the sincere, idealistic voice of this wounded warrior, even as he explained policy positions I vehemently oppose, had my eyes misting up. And don't get me started on Aretha: I've had her music on a constant loop since she went into hospice care, and every time I hear "Natural Woman," "Think," "Respect," even covers of songs not associated with her, or Lord help me, just a few seconds of her singing gospel music, I start to lose it.

But this essay is not about John McCain, Aretha Franklin, or the monster in the West Wing. Today I write about losing it; or, to be more specific, the phenomenon of being a weeping man.

Growing up, I was never told to hide my tears. I didn't cry often, and when I did, it was usually soundless: I've often heard my mother describe the silent tears rolling down my toddler cheeks. I was then, and more than half a century later, still am a private person. When I'm by myself, and there's no one around to hear, I feel liberated to express my emotions, and may shout or curse at a frustration or, if I'm feeling sad, sigh loudly. But in the company of other people, even those close to me, I'm much more reserved. As a lonely, depressed teenager, I would sometimes come home from school, run up to my room, shut and lock the door, throw myself on my bed, and sob into my pillow, hoping nobody could hear me. I didn't want comfort or company; I just wanted to get the sadness out of my system before anyone could find out it was there.

As an adult, I have occasionally cried in the presence of others: on learning of the death of a family member, or facing a professional setback that made me fear for my future. But to this day, even when I'm enduring my greatest pain and sorrow, I reserve my most vocal grief for times when I'm alone. Losing my first teaching job in 1984, I retreated all the way home to my apartment, a half hour drive from the school board meeting that had denied my appeal, before I let the tears burst forth. Ten years later, my first divorce house, a small rental on the outskirts of Estacada, was isolated enough that I could howl through my middle-of-the-night psychic pain without disturbing any neighbors.

It's not that I don't appreciate the efforts of others to comfort me, or that I'm embarrassed by my sadness. There are times when I need an arm across my shoulders, a hand to hold one of mine. But those times are few: most of my grief work I do in solitude.

My father told me many times that he envied my ability to weep. That always struck me as ironic: by my reckoning, tears were a rare thing for me, popping up (divorce excepted) just once or twice a year. For Dad it was worse, though: he could only cry after having a belly laugh. I saw this once, when my family came to England to meet my infant daughter Sarah. We were eating out at a pub in Scotland when Sarah started doing what babies do when they're filling their diapers, turning red, scrunching up her tiny face, and making soft grunting noises. Dad lost it, laughing deeply until he had to wipe his weeping eyes.

I don't know if Dad was raised to hide his feelings. Certainly his big sister wasn't: Aunt Fran shared her feelings with me on several occasions, and I remember her talking about a time when just packing a suitcase could make her break down and cry. It's conceivable that the Swedish and German upbringings of his parents may have discouraged displays of deep emotion; and the early-to-mid twentieth century, when he was growing up, was a time when American popular culture promoted male stoicism. And yet, I think we Baby Boomers overplay that notion: midcentury movies like The Quiet Man and The Man in the Grey Flannel Suit are all about the dangers of burying trauma and bottling up emotions. And men of the generation after my father's--the early boomers--seem far less reticent to share their sadness or grief. I remember well the final episode of MASH, in which Alan Alda was an archetypal crying man. That came just a few weeks before my college graduation, a day when I sobbed openly in front of my family and the friends I was about to be separated from.

It's true, though, that there are relatively few examples of men crying in popular culture. Alan Alda stands out not just because that moment, expressing his character's grief over a horrible tragedy of war and, at the same time, the end of his friendship with BJ Hunnicutt, was a vicarious release for all those in the audience grieving the end of a show they'd loved for almost a decade; but also because there are so few other popular examples of men weeping for us to turn to. It's not that men don't grieve on film--Wolverine grieving in a rainstorm is a Marvel movie trope, for instance--but when they do weep, it's a quick dab at the eyes with a handkerchief, nothing messy. That's true off the screen, too: with the notable exception of ex-Speaker of the House John Boehner, who was mercilessly ridiculed by comedians for the frequency with which he wept in public, few politicians will shed more than a tear or two. They may get choked up in the middle of a speech, but by and large, American public figures save their weeping for the residence, not the podium. To do otherwise would be to lose it.

But what are we losing when we give in, and let the tears flow? Control? It's certainly important for me to believe I've got some control over my destiny--it makes the future a lot less scary--but in fact, I've really only got a say in how I respond to the world in this moment. A quick illustration: I recently played Risk with two of my grown kids. As I played, I used a strategy that has served me well in the past of carefully expanding my zone of control, waiting for the moment to strike. When that moment came, my strategy fell apart because I just couldn't get a good roll of the dice. Risk is a game that combines strategy and chance, something that I've seen used to criticize it, but in fact, I think it makes it far more realistic: there are things in life you simply can't control, no matter how hard you plan. Your backpacking trip is smoked out by a wildfire. That lesson you were so excited to present is wrecked by a Tier 2 kid having a bad day. The date you were looking forward to has to be canceled due to a stomach bug. Your big push into Russia that was supposed to be victorious by October gets bogged down at Stalingrad, and now you're facing an arctic winter with your troops still in their summer uniforms. Vacations, jobs, relationships, wars, all of them can be disrupted by random elements, things utterly beyond the control of even the most careful planner.

When all else comes crashing down in a horrible FUBAR mess, there is one thing that we can still control: how much of our grief the world can see. And that, I suspect, is why men are more likely to be stony faced than weeping openly, and why even the most emotionally intelligent of presidents was an eye-dabber rather than a sobber. When we do cry in public, it's because something inside us broke, and we can't help ourselves. We've lost it.

There is hope for those of us raised to be in control. I've heard Marc Maron speak many times about how watching live musical theater is a trigger for him: something about seeing people sing on stage just makes him cry. For me, it's the sound of children singing. Anytime I hear "Suo Gan," the Welsh lullaby at the heart of Spielberg's Empire of the Sun, I can't help myself. This is a tad dangerous for someone who teaches music to children: on any given day, I hear large numbers of children singing. Mostly I keep it together, but sometimes--as, for instance, when last year's Byrom choir would sing an arrangement I did for them of the Israel Kamakawiwo'ole version of "Somewhere Over the Rainbow"--I just can't help myself. I turn away for a moment, dab at my eyes Barack Obama-style, and move on.

This is happening more for me lately. Perhaps as I move deeper into middle age, and start counting down to retirement, I'm more in touch with my feelings, more in need of expressing them than I used to be. Perhaps I've come to realize that the walls I once labored so hard to erect around those feelings are just not that important, or that nobody's going to ridicule me if I shed an occasional tear at the innocent beauty of children singing, or the connection I feel to a deceased conservative with whom I'm surprised to discover I share quite a few values. Maybe it's just this time we live in, when the country that is my birthplace threatens to become a place I no longer want to call my home. It's true, as well, that at the age of 57, I am again at a career watershed, in my third year as a probationary teacher, unsure if I'll make contract, wanting very much to stay in this school until I retire but afraid that all sorts of things could happen to prevent that. I don't know that any of them will happen--in fact, it's very likely this will be my strongest year yet, and sometime this winter I'll be able to report to you all that I've made it, and my future is secure--but like John McCain, who prior to settling in Arizona had moved so many times that his longest-held address was the Hanoi Hilton, I'm conditioned to think of three years as my maximum, and anticipating the goodbyes I'll hopefully not have to say for another eight years.

To make this long story a little longer, it could be lots of reasons that my eyes tear up so much more freely than they used to. Whatever the reasons, I am sure of this: losing it--it being the wall around these feelings--would not be a bad thing for me. Not bad at all.

Now pardon me while I put on some Aretha, and shed a few more tears.
Labels: crying grief masculinity sadness tears weeping
Location: Portland, OR 97229, USA