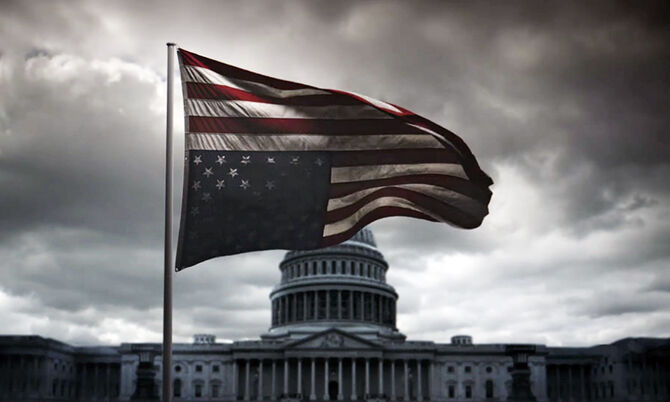 Democracy is the worst form of government, except for all the others.--Winston Churchill


They saw this coming.

I've heard and read the many experts bewailing the gathering storm clouds of Constitutional crisis, wringing their hands and fretting over how the founders never imagined a populist monster like Donald Trump could become President, dragging the nation into a vortex of corruption and deceit that makes House of Cards look like a Disney cartoon. With the executive branch ignoring any custom, tradition, or customary practice that might impede its overarching policy of "order bad, chaos good," and hinting at the likelihood it will ignore rulings by even the Supreme Court, while simultaneously transforming the Immigration and Customs Enforcement force into a battalion of storm troopers, and constantly ginning up the racist fears of its small but rabid base, it does, in fact, appear that the founders should have built more safeguards into the Constitution than impeachment.

In fact, though, the founders were far wiser than we give them credit for. They knew about authoritarians, tyrants, and demagogues. The king they had led a rebellion against was the figurehead ruler of a parliamentary democracy, and even his mild authority was viewed by them as oppressive. The Presidency as they envisioned it had far more constraints than what has evolved in the last two decades, and the President was elected not by a general ballot of every citizen, but by land owners, and even they were voting not for President, but for electors. The electoral college was designed to temper the whimsical preferences of the popular vote.

Over time, the electoral college was weakened, political parties took on a greater role, and the franchise was expanded over time to include every American citizen 18 or older. But still, the indirect election system, the balance of powers, every part of the Constitution that has to do with the executive branch and the election of the President should have prevented Donald Trump from winning that election--and even if he had won the popular vote (which he didn't, by a large margin), have prevented him from ever taking office. The founders were afraid of populism as much as they were of tyrannical autocrats, and the Constitution is designed as much to protect us from the tyranny of the majority as from the tyranny of dictatorship.

But it didn't. Somehow the very tool that had been created to keep a Trump from ever becoming President was precisely the tool that gave him the office, despite losing the popular vote. And now the checks and balances, already weakened by one-party rule, threaten to buckled under the strain of a President who's never been checked by anyone, who always found a way to buy himself out of a predicament, settle himself out of a lawsuit, lie himself out of every abominable thing that has ever issued from his mouth, and laugh off the concerns sane Americans have about the constant contradictions.

But I'm still convinced the founders knew something like this could happen. I think they imagined it with fear and trembling, especially knowing as they did that the fuse had already been lit for a Civil War over unresolved questions about slavery. They could look to the bloody chaos of the French Revolution and see what could become of American democracy if it fell into the hands of demagogues. They knew that, no matter what provisions were built into the Constitution, there could come a time when some powerful, magical figure overcame all the rational ideas and practices that should have kept him from winning a single primary. They knew that concentrating the vote in the landed, educated class could only last for so long before more ordinary and less wealthy people demanded a voice of their own. They imagined it with fear and trembling, but they knew it was inevitable.

And still, they built a constitution that protects rights, that presumes the voters will not make too bad a mistake, taking their responsibility of electing the chief executive as seriously as anything else they did. For the most part, they were right: the masses have elected Presidents who were mostly honest, mostly competent, mostly committed to leading and defending the nation against populist and foreign waves of disunity.

The trend of mostly honest, mostly competent Presidents carried us through a civil war, two world wars, a depression, and the civil rights conflicts of the 1960s. Then came a President whose amoral lust for power, coupled with a hefty dose of paranoia, put the Constitution to the test--and somehow it survived. Richard Nixon resigned rather than undergo impeachment. It looked for a time as if the stress placed on the republic had strengthened it, as the voters initially punished Nixon's party with a Democratic wave, then forgave it with the Reagan/Bush era. In fact, though, the white reaction to the civil rights advances of the 1960s, exploited by Nixon's southern strategy, simply slipped beneath the surface, empowering a prolonged conservative retrenchment that gave birth in the 1980s to the Moral Majority, in the 1990s to Newt Gingrich's Contract with America, in the 2000s to the Tea Party, and now to the Trumpification of America. Each of these waves has been more virulent than its predecessor, less willing to compromise, less concerned with facts, more eager to blame minorities for perceived problems with the economy, and has tapped more and more into the chaos of unchecked populism the founders sought to avoid.

They did see this coming, though. The Constitution does not guarantee peace, prosperity, and liberty for all Americans for all time. Rather, it sets in place a system by which Americans acting rationally, responsibly, and generously can promote the greatest good for the greatest number. After creating the rules of the game, the founders rolled the dice and hoped for the best, but they knew from the beginning that the massive variable of human nature would dictate outcomes far more than any document ever could.

Play any game with a chance element, and you soon learn that fortune can be cruel. Human nature being what it is, there's always the possibility that grifters, grafters, and demagogues will con their way into high office and attempt to exploit liberty for their own interests; and human nature being what it is, such political depravity will ultimately be checked by more principled politicians or, barring that, by elected officials' native fear of angry voters. This Hegelian dynamic has powered the slow but sure expansion of the franchise from the small sliver of first-generation Americans who were white, male landowners to any citizen who's had an eighteenth birthday. It's broadened human rights to the point that diversity is the touchstone of American popular culture.

Every thesis ultimately generates an antithesis, though, and the antithesis to the hope of the early Obama Presidency took its (hopefully) ultimate form in the person of Donald Trump, a megalomaniac whose every act seems designed to wreak havoc on 242 years of American progress. This Presidency is a rolling crisis that tears children from parents, promotes filthy energy industries that were on the verge of becoming obsolete, tears up international agreements that have created global prosperity, and and and and and...

And yes, the founders saw it coming, and built safeguards into the republic, and those safeguards are not impeachment, not investigation, not even the tripartite separation of powers. No, the cavalry needed to rescue us from this monstrous Presidency is us. We cannot look to anyone to save the country but ourselves.

This was the brilliant hope the founders wove into the Constitution with its opening words: "We, the people of the United States of America..." The rights and responsibilities of American citizenship currently being challenged by the President were not bestowed on us by any outside force, whether it be God, a king, or an international body. They come from within. We are the ones with the privilege and responsibility of taking what's left of America once Trump is finished with it  and making it truly great, not with a reactionary appeal to 1950s white sitcom culture, but with a forward-looking embrace of diversity.

If it's to be, it's up to us. How very reckless of the founders to put the fate of the country in the hands of we, the people--and how prescient. The very problematic democracy that has us all quaking whenever the name "Trump" comes up is the force that will save us from him.

It won't be easy. We've known that all along: no one march, no one act of defiance, no one wave of opposition can bring down the clay-footed idol in the White House. It will take an ongoing, unrelenting, concerted effort to turn back the inhumanity of his policies, to protect the fragile resources he wishes to exploit, and to keep him in his place until we can finally remove him from office, whether through the Republican party finally summing up the courage to do what, in its heart, it known what must be done, and impeaching the monster, or through chastening him in the midterms, then turning him out of office completely in 2020.
Labels: Constitution democracy Donald Trump
Location: Portland, OR 97229, USA