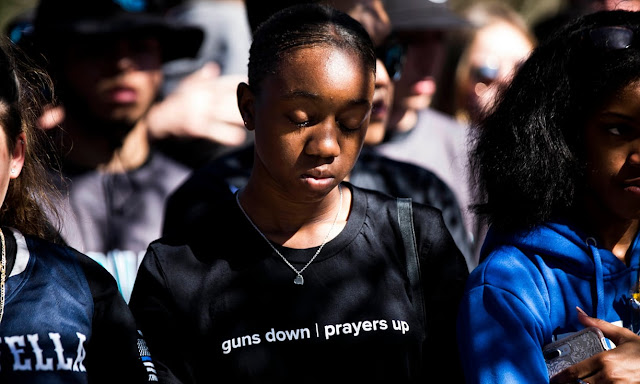 Students at a memorial service in Parkland, Florida

If he hadn't had the gun, those seventeen people would still be alive.

I can't say that truth will get lost in the pointless ritual that follows every school shooting. There are always commentators making this point, and plenty of people--the majority of Americans, in fact--who agree with it. And yet, I know that in the end, it will be ignored.

How do I know this? Let's start with the responder-in-chief, the President of the United States, who, for once, spoke with measured, careful tones about what had happened at that Florida high school as an angry antisocial ex-student smuggled an assault rifle on campus and indiscriminately picked off students and teachers, then disappeared into the crowd of terrified fleeing teens. Trump didn't mention guns once in his speech. He's not alone: most politicians treat the truth at the heart of America's gun problem--that it involves guns--as a third rail.

From there, I turn to the organization that has, all by itself, managed to cynically, even diabolically, deflect attention from that truth again and again, hundreds of times since the Columbine massacre ushered us into the modern Age of the Active Shooter: the National Rifle Association. This lobbying group has so much blood on its hands it's beginning to resemble a death cult. Any policy proposal that even remotely has a chance of limiting the access of angry young white men to the tools that enable them to become mass murderers is labeled an assault on essential liberties. The NRA's solution to too many guns is always the same: more guns. Arm everyone. Turn a mass shooting into a free-for-all in which everyone dies. Then, at least, we have a better chance of knowing that the active shooter will be dead at the end.

But there's nothing I can do about those gundamentalists, so I'll move on to the next part of the equation: well-meaning people who blame deficiencies in society for school shootings. Look at Canada, they'll say. They've got plenty of guns there, yet nobody walks into a Canadian school and opens fire. It must be something wrong with this country. And yes, they do have a point there: mass murder has become something of a fad in the United States of America. Whether it's the country music festival in Las Vegas, a Baptist church in Texas, or a high school in Florida, killing a lot of people with an assault rifle has become a cultural phenomenon. Something snaps in a person--again, almost always a white man--and he uses his obscenely lethal hobby guns to mow down a roomful of children. We have a public mental health problem, these commentators will say. There aren't enough psychologists and counselors in our schools, enough social workers in our communities, enough access to the services that could help a lonely, isolated, angry white man overcome his frustration and make less lethal choices.

To which I say, yes, but: take the guns out of these men's hands, and while they'll still be frustrated, angry, and isolated, they at least won't be killing a dozen children over it.

Yes, America is a horribly callous place when it comes to public mental health. Yes, we are ridiculously miserly in doling out services to those who need them most. Yes, being proactive in our handling of sociopaths is something we ought to be doing whether or not they have access to AR-15s.

But they do. And they're killing our children with those weapons. So how about, before we offer therapy to the first grader who's playing with matches in a puddle of gasoline, we take his matches away?

Yesterday morning, I cried into my breakfast. I was listening to "Up First," the NPR morning headline podcast, and they did a story about the students who were using their phones to report, live, on the shooting as it happened. They followed it up with the protest the students organized, on their own, soon after the shooting had ended, and the words they chanted: "No more guns! No more guns!"

They get it. They've seen all the bullshit, and they're calling it for what it is. They know that the difference between a disgruntled teenager with a gun and one without a gun is seventeen bodies. They know the political platitudes, the public hand-wringing, and most of all the inexcusable lies being spewed by the gun lobby will do nothing to prevent next week's school shooting. They know there are just too many guns, and more of them will only make matters worse.

Here's where I need to get personal, and speak from my own perspective as an educator. I teach music in a public school that was built in the 1970s. My building is blessed with a dedicated, caring staff who work hard to make sure that no child, however difficult, is left behind. We can tell which children are struggling emotionally and socially, and we do everything we can to get them the support we need. Our psychologist and counselor create plans for them. Our teachers and administrators conference with their parents. We put them in support groups, given them a cool-down room for when they need to be alone, have educational assistants accompany them to activities that are difficult for them. We put them on behavior modification plans to help them learn how to behave acceptably in every setting. In extreme cases, we refer their parents to professionals who can give them the help we're not equipped to provide.

In a word, we're being proactive. We're doing everything we can to help every child grow up to be a healthy, happy part of American society.

My school is not unique in this work. The school I came from before this job had all these same supports in place. I know they continue once children move on to middle school and high school. Public education takes mental health very seriously. The old canard about us not having enough resources, and spending too much time on testing, is simply not true. Sure, we could use more money to update our facilities and lower class sizes; and at some point, we really need to get over our nationwide obsession with standardized testing; but by and large, public education in 21st century America is providing troubled students far more support than it ever has before. These kids are not falling through cracks.

So what about the Florida shooter? Wasn't he expelled from the school he shot up?

Yes, he was. And here's the painful truth: there are some students who just can't be helped, no matter how much attention is showered on them by teachers, counselors, administrators, and even their parents. Some of them have a death wish. Absent the means to fulfill these bloody fantasies, they may still commit violent acts that land them in the criminal justice system. Assault without a deadly weapon is still a crime.

Assault with a deadly weapon, though, is murder.

I know there are other measures that could be taken to protect children. A couple of times a year, we have lock down drills, during which I lock my doors, turn off the lights, and have whatever students are in my room huddle in a corner where they can't be seen. There is only one outside door in the building that is unlocked during school hours, and it only provides access to the rest of the school by passing through the front office. That's not a 100% solution--a shooter could make quick work of the office staff, then head on through the work room to the rest of the school--but it's a buffer. We also have an open campus: at both ends of the school, people can just walk onto the playground, unseen by anyone in the building. Those areas could be fenced off, but like many public schools, our outdoor facilities are open to the public during non-school hours. I love it that our students can do what I did as a child, and visit the school on weekends to play on the equipment, perhaps use the playing field to fly a kite.

These are some of the things that make public schools public. Fencing off the facility, cutting off access to it, takes it out of its central role in the community.

So let's get back to the issue with which I started this essay: if he hadn't had the gun, those people would still be alive.

Pundits and politicians are wrong. This is not complicated. Take the guns away from the angry young white men, and while they'll still be obnoxious, and might even need to spend some time in jail until they can outgrow their rage, at least they won't be mass murderers.

And no, I don't have any illusions about this simple solution being easy. America is addicted to guns. Curing an addiction is a difficult, expensive thing to do. It doesn't happen overnight. Some addicts spend their entire post-addiction lives in recovery. But if they never start, they'll never recover.

We need to begin recovering from our gun addiction. Taking the first step need not be a complicated thing. It needn't even be returning to the ban of assault rifles--well, not yet anyway. It could just be restricting how big a magazine they can have. Less bullets means less bodies. It could also be restricting the sale of weapons to people who, for one reason or another (say, being expelled from a high school for violent tendencies), should obviously not be allowed to have them.

And yes, I now that in the eyes of the gun cartel and the rabid addicts it services, even these simple common sense restrictions are blasphemy. But at some point, we the people and the politicians we elect have got to summon up the courage to tell the NRA to go to hell.

As those terrified children said in the wake of yet another NRA-sanctioned slaughter: no more guns. It's as simple as that.
Labels: #nomoreguns gun violence NRA school shooting
Location: Portland, OR 97229, USA