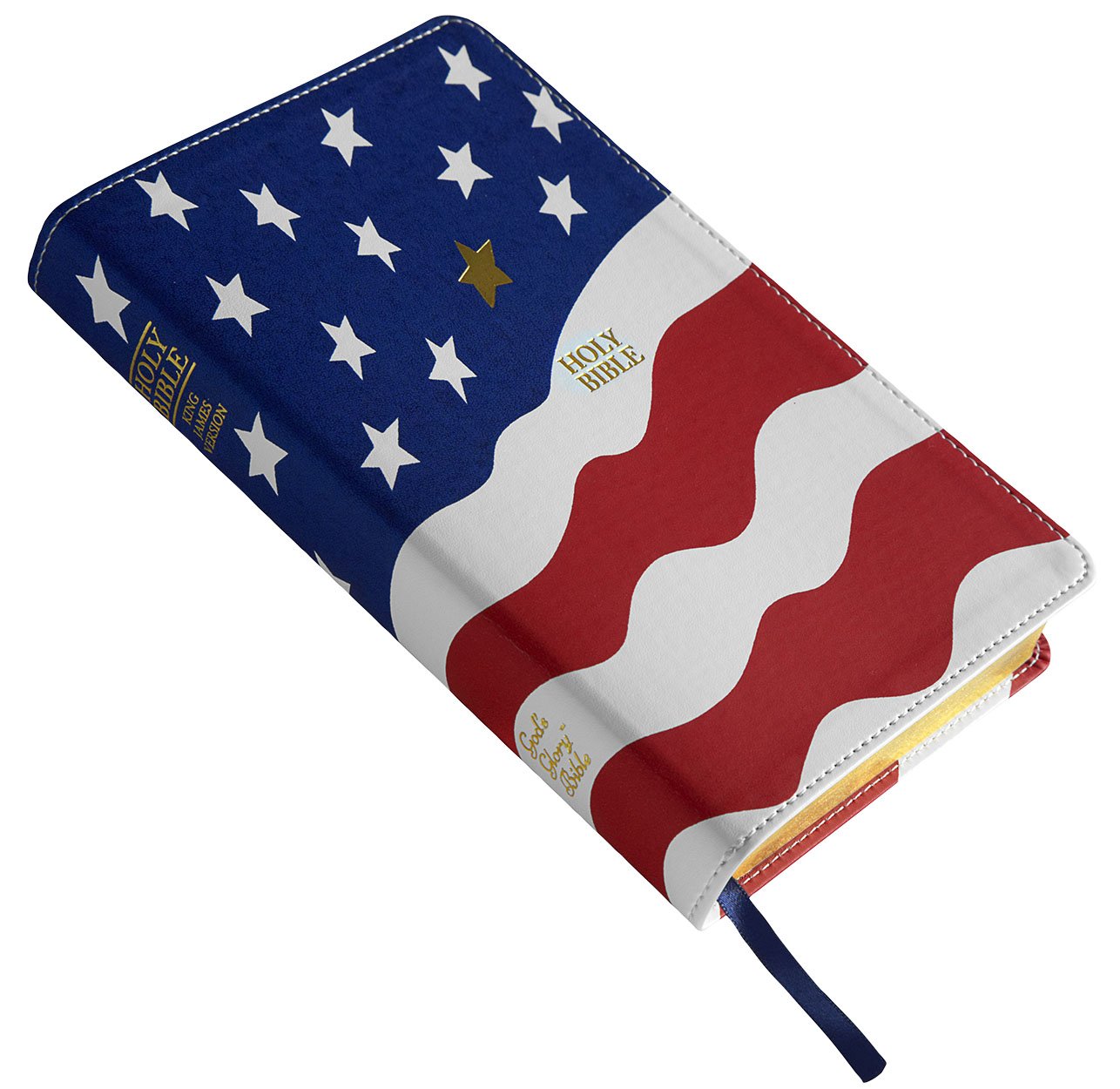 I knew I wanted an opening image that combined the American flag with a Bible, but until I googled it, I had no idea something this perfect existed.

Yes, this is a thing. It's available on Amazon. It's not just Bible wrapped in a flag cover, mind you: it's the God's Glory Bible, and it's the King James Version (known in Britain as the Authorized Version), so it's all written in the language of the empire the creators of that flag revolted against. And all that irony is, I suspect, completely lost on the people who will plunk down $39.99 to own it.

I googled the image because I've had a Trumped-up controversy on my mind. I've already written (was it really just seven weeks ago? Seems much longer...) about the Trumped-up controversy around NFL players taking a knee during the national anthem, and I thought I'd said all I needed to at the time. But then I spent four days in Texas, and it all came flooding back: the three years I spent treading water in a sea of double-barreled fundamentalists, the feeling toward the end that expressing my skepticism toward either blind patriotism or Biblical literalism might put my safety at risk, and the relief I felt escaping all that. It's still there, now with the added threat of open-carry gun ownership; and as friendly and hospitable as the hosting Orff chapters (they're Orff teachers, after all), and the citizens of Fort Worth I encountered were toward me and my fellow conference attendees, there was no escaping the ubiquity of those influences. Flags were everywhere, buses carried anti-abortion ads and, as I related in my last post, the conference began with instructions on what to do if a shooter walked into the convention center and opened fire.

With some distance from that place, and another day at home (my students decided to honor my return to the classroom by awarding me the STREP prize), I'm ready to tackle one of my longest-running philosophical/theological passions: American idolatry; more specifically, the two symbols Americans are most likely to worship at the expense of the invisible God they profess to follow.

Honoring the American flag has been a part of my life since early childhood. My father became an Eagle Scout when he was 14, probably just a few months before the attack on Pearl Harbor. All five of us became Cub Scouts, then Boy Scouts, and ultimately, Eagles, a feat few Scouting families can match. Respect toward American institutions is an essential part of the Scouting ethos, and my father did nothing to discourage this. On Scout Sundays, we were part of the honor guard carrying the flag into the sanctuary of Dad's church. We did the same in local parades, marching flags down Main Street of whatever town we lived in. When in Washington, DC, whether individually or as a family, we visited all the shrines of American democracy. In some ways, we were more consistently faithful to civil religion than we were to the Methodism in which we'd grown up.

And it stayed with me: I still reflexively gasp when I see American flags attached to cars and trucks, being blasted to tatters by the wind. I don't like to see clothing decorated with the flag, either, except as a shoulder patch. Having it plastered across someone's chest or bottom feels wrong. My feelings about the flag extend to proper retirement of flags that have become too damaged by the elements to be displayed any longer: as an adult Scouter, I participated in a burning of such flags (the respectful way of disposing of flags).

And yet, there are lines that I draw. While I have often sung "The Star Spangled Banner" lustily, taught it to students, and played it countless times at the beginning of ComedySportz matches, I've become uncomfortable with the anthem, especially in light of the forgotten verses that follow the one we sing. There's some very bad poetry in those verses, but far worse, blatant racism and an endorsement of slavery.

The same could be said, of course, of the U.S. Constitution, though we have amended those ideas out of that foundational document. That is not the case, however, with respect to that other American idol: the Holy Bible.

There are many translations of the Bible available, but I'm thinking in particular of the King James. It's absolutely a Christian Bible, a translation based on the assumption that everything in the Hebrew scriptures was, one way or another, prophecy of the birth, live, death, resurrection, and lordship of Jesus Christ. More modern translations have sought to correct some of that bias, going after more accurate translations of both the Hebrew and Greek, and many in the Evangelical community have adopted one or another of those more recent versions. Even so, the archaic language and cadences of the KJV remain close to the heart of some of the most idolatrous of American churches, those who esteem this book more highly than God or Christ.

And yes, it is a book. During my seminary days at SMU, Professor John Holbert, my academic advisor, liked to talk about a previous Bible professor who, on the first day of class, would throw a Bible on the floor and stomp on it, shouting to the students that "This...is...a...BOOK!!!" Nobody at the seminary ever did anything that radical in my time there, but I appreciated the point of the story: however much we may honor and respect the scriptural texts, it is, ultimately, a thing, and thus not identical with the Almighty.

That's the irony in the way so many conservative American Christians act toward both the flag and the Bible: Christian teaching, and Jewish teaching before that, is utterly opposed to the use of any physical thing as an object of worship. The Old Testament goes to great lengths to ridicule the use of images by pagan religionists, and to condemn their intrusion into the temple, to the point of calling them an abomination. In the wake of the destruction of the temple, this became a far simpler thing for Jewish practice, though over time, respect for the Torah could be mistaken by some to be a kind of idolatry.

The church, growing up as it did in the far more idol-tolerant culture of the Roman Empire, quickly took on the trappings of the former pagan beliefs of its adherents. By the time of the Reformation, Catholic worship had so steeped in iconography and pageantry, leading English puritans to smash stained glass windows and discard altar crosses. That ethos traveled to America, and surviving colonial churches maintain the simplicity of the puritan esthetic. But human nature abhors a symbolic vacuum, and over time, Americans embraced both the Bible and the flag as objects worthy of worship.

So here we are today. There is no escaping the power of the flag as an idol of civil religion. Even those who burn it in protest are acknowledging that power, for if the flag was just a colorful piece of fabric, its destruction would have no shock value--and give no satisfaction to the anarchists setting it aflame. Similarly, the Bible is held in such high regard by American Evangelicals that defacing it in any way is considered a kind of desecration (a word also applied to anarchist treatment of flags).

The prophets and theologians who composed the Hebrew and Greek scriptures that became the Bible understood how problematic this can be. Valuing an object over the principles it represents has again and again been a hallmark of authoritarian movements: the Crusades, the Ku Klux Klan, fascism, and now Trumpism. Nationalism is an inherently idolatrous movement, advocating worship of the state and its leaders. Nationalism engulfs its adherents in passions within which the higher ideals of religion have no place. Thus, the Evangelical voters of Alabama don't just ignore the pedophilic history of Roy Moore; they circle their wagons around him to protect him against the accusations of his victims. It's a local version of the madness that overtook Evangelicalism a year ago as the most conservative religionists in America enthusiastically turned out for a Presidential candidate who was an unrepentant adulterer, molester, liar, cheater, thief, egomaniac, and bigot. By and large, they still support him, despite a year in which he has not walked back any of his excesses.

It's no surprise that Trump's embrace of the flag is blatantly idolatrous, or that he views the taking of a knee by a person of color as tantamount to desecration of that flag; or that his followers affirm those same fascistic opinions. What is startling is the extent to which Evangelical Christians have been willing to abandon one of the primary themes of the Bible they also claim to revere, and to follow him down the garden path to open idolatry.

There's a moment in the Exodus narrative that is becoming eerily prophetic: Moses has spent too much time on the mountain, talking to God. In his absence, the people have grown restless, and prevail upon Moses's brother, Aaron, to make them an idol they can see and touch, who is neither invisible nor absent. He does that, taking their jewelry, melting it down, and fashioning a golden calf. Finally returning with the tablets of the Law, Moses sees what the people of done and, horrified at their contravention of one of the central tenet of the Law, throws the tablets down, shattering them. What follows is a slaughter of the idolaters.

If Evangelicals genuinely believe that the Bible says what it means, and means what it says, they'd best reconsider their embrace of Roy Moore, Donald Trump, and the flimsy objects in which they've placed their trust. The time is coming when they will be held accountable for their neglect of the most essential commandments; and if Exodus is any indication, they're not going to like the outcome.
Labels: American flag Bible evangelicalism fascism nationalism patriotism
Location: Portland, OR 97229, USA