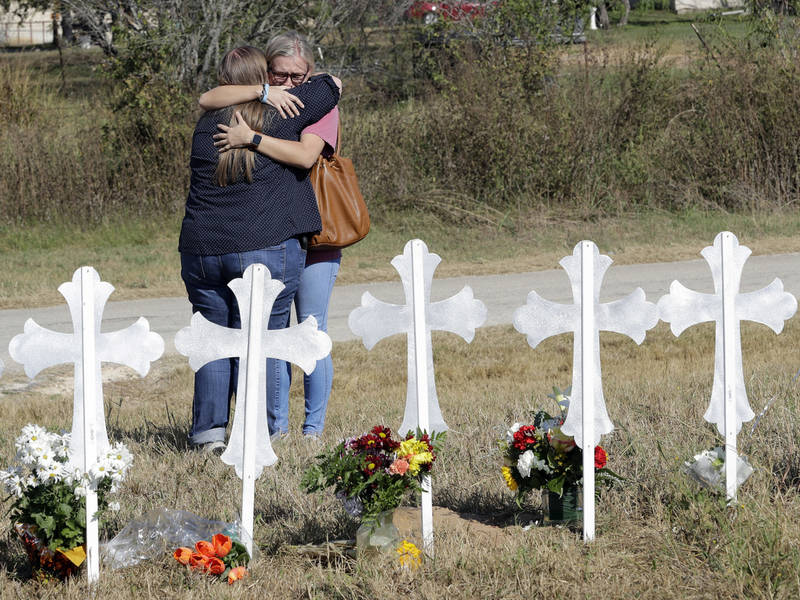 There is no conference like an Orff conference. When music educators who practice the Orff philosophy gather, we celebrate. We play, sing, dance, laugh, and rejoice in the incredible privilege of sharing our love of music with children. For three days last week, that's what we did, and in every way except one, it was exactly the conference we all needed in this Age of Trump.

That one exception, though, was huge: this was the first time I've ever known a conference to begin with the host telling us what to do in the event of an active shooter.

The announcement could very well have happened anywhere the conference was held. It came, after all, just weeks after the worst mass shooting in American history--and just days after the second-worst shooting. In each case, a white American used assault weapons to slaughter innocent people who had gathered to celebrate. In the first instance, they were attending a music festival in Las Vegas. In the second, they were worshipping in a small Baptist church. And those are just the big ones: just today, there was a shooting at a school in northern California that took four lives. Every day, somewhere in America, random people are killed by bloodthirsty gun owners.

So in a time of NRA-approved terrorism, that announcement could well have been made had the conference been in Cincinnati, San Diego, or Atlantic City. That it was made in Fort Worth, though, made it even more frightening, because Texas is where the church shooting happened; but even scarier than that, of all the gun-loving states in the nation, Texas has to be near or at the top of the list.

Heading back to the airport at the end of the conference, I shared an Uber with two other teachers. As our gregarious driver maneuvered through the DFW traffic, he held forth on many things that startled us: his opinion that San Francisco was full of illegal aliens too lazy to work (he was, himself, an immigrant from India); the joy of hunting for and eating large game animals (his Hindu parents, he told us, would be horrified if they knew); and most of all, his dedication to gun culture. He and his wife both kept guns in their glove compartments (though not when he's driving for Uber; it's against their policies, though one of my fellow teachers told us that coming from the airport to the convention center, her driver had announced he kept a gun in his car, despite that policy). Texas is an open carry state, a state in which licensed gun owners can wear their weapons or, if they happen to be too large to wear (think, again, assault rifles), carry them, as some gun activists have done, to the consternation of the patrons of the establishments they carried them into.

The church shooting is already fading from the headlines, pushed out by underage sexual assault allegations against a gun-flaunting Alabamian Senate candidate. For the day or two that it was current, though, there was a statement by the President that managed, in just one breath, to call for prayers for the victims and insist that the rapid-firing, large magazine weapons that had indiscriminately mowed small children, grandparents, and everyone between those extremes as they cowered in the pews had had nothing to do with the death toll. It was, Trump insisted, all due to a faulty mental health system. And in fact, it was revealed a few days later, the perpetrator had at one point escaped from a psych ward, and according to Texas law, should not have been permitted to purchase the weapons he did. It seems the Air Force, from which he had been discharged after beating and seriously injuring his infant stepson, had neglected to notify the proper authorities of his conviction on assault charges.

In fact, though, that highlights the precise problem with the insignificant gun control measures that somehow have managed to squeak past the NRA's demonic devotion to absolute firearm libertarianism: reporting agencies make mistakes. People who should never be permitted to own a slingshot, let alone an assault weapon that can take 26 lives in a matter of minutes, slip through the cracks in the reporting system.

Suppose 26 people had died in the collapse of a bridge that had failed an inspection but, due to a reporting error, had not been closed for renovation or replacement. The scandal would lead to a complete rewrite of the codes that had permitted the disaster to take place.

And yet, week to week, year to year, the systems we have in place to monitor gun ownership permit mass murderers to purchase arsenals and turn them against innocent people. This particular murderer had traveled to the church to kill his former mother-in-law (after his abuse conviction, his wife divorced him); not finding her there, he nevertheless took 26 lives.

Simply put, systems and regulations to restrict and prohibit the sale of firearms to people who might use them against others are failing miserably. That these military-grade weapons are even available for purchase by the general public is an abomination. The only way to keep them from being used in the way they have been used over and over again is to stop selling them and require the forfeiture of those that are already in the possession of American citizens.

Perversely, the NRA takes every mass shooting as an opportunity to double down on its appeals to gun owners to lobby for even less restrictions on their bloody hobby. Rather than being martyrs to the cause of disarmament, those 26 dead Texans have been sacrificed on the altar of gun worship.

I had a wonderful conference, full of sublime moments of music-making and learning. I shared my hotel room with an Orff newby, who was attending for his first time, and who'd never taken any Orff workshops before. At the end of the first day, we were commiserating about the shock of that morning announcement, the dreadful state of American culture, and he remarked that what we were doing--creating safe spaces for children to learn to make music together--might well be the solution to all America's problems. I loved his idealism. I share it: my personal creed as a music educator is that I work to nurture an appreciation for truth and beauty in my students.

But all of that would be so much easier if we could just start to get rid of the goddamned guns.
AOSA Conference gun control mass shooting Sutherland Springs shooting Texas
Location: Fort Worth, TX, USA