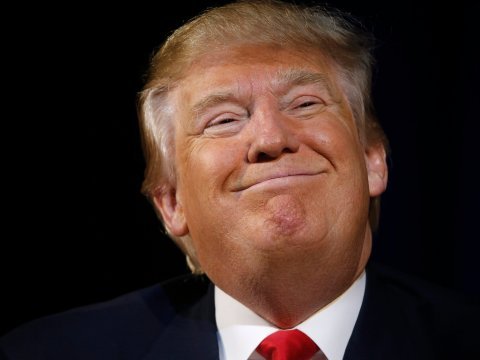 It's true: he doesn't care what you think.

He's not your President, either.

It dates back at least to the debates, when candidate Trump referred to Barack Obama as "your (meaning Hillary Clinton's) President." Of course, that attitude toward the 44th President grew out of years of single-handedly keeping the "birther" movement alive, as Trump refused to accept even the documentary evidence of a birth certificate that Obama was born an American citizen.

Many, including Trump, have criticized Clinton for engaging in identity politics: promoting the ways in which her policy goals would benefit women, persons of color, the LGBTQ community. In doing so, the critics forgot the essential truth, voiced by Tip O'Neill many decades ago, that "all politics is local." It's the job of government to address the needs not just of the whole populace, but of its fractions, even its individuals. The Constitution exists not to defend the tyranny of the majority, but to protect the rights of the minority, however few its members may be.

Setting that argument aside for the moment, the one thing that, above all else, has defined first the candidacy, and now the Presidency, of Donald Trump has been the identity of his base. He campaigned almost exclusively in states whose disaffected white populations could be counted on to turn out for someone who would not only represent their interests, but do so at whatever cost that representation might exact on the minorities with whom they associated their injuries: immigrants, intellectuals, the news media, scientists, environmentalists, women, persons of color. Since taking office, the list of losers has been expanded, and now includes sexual minorities, recreational marijuana users, the judiciary, and even the Republican establishment. The Trump regime is engaged in a constant circling of the wagons that grows narrower with each perceived threat to his authority.

Presidential campaigns have always slanted toward their bases, the voters they can count on to turn out on Election Day. Alienate base voters, and they may not show up to cast their ballots. Despite this real concern, once candidates emerge from the primaries, they have almost always sought to broaden their base, to appeal not only to the entirety of the party they represent, but also to the independent voters essential to winning a popular victory. Extremist rhetoric is discarded for the general election, as candidates insist that, as President, they will represent all the people, including those whose votes they did not win.

Until 2016, all candidates did this. And then came Trump.

Trump campaigned as if he was leading a revolt against the rest of the nation. His base was the angry white voters who were disenchanted with the elites of both parties. They were victim voters, mostly white, who blamed minorities for whatever difficulties the economy had dealt them. It was a significant, but not huge, slice of America. By itself, it would not have delivered the White House to him. But it had help: once the rest of the primary field had been eliminated, Republicans--even those appalled by Trump's boorishness, his irreligiosity, his disdain for the establishment of his own party, and his squishiness on entitlements--fell in line and cast their ballot for him.

Since winning the electoral vote, despite losing the popular ballot by three million votes (the worst performance ever by a Presidential winner), Trump has stuck to his primary campaign persona, pandering only to the base who elected him. He panders to them with his retrograde policies, appeals to them in tweets and speeches, summons them to his aid when other politicians and media outlets speak the unflattering truth about him. His is a nationalist policy of identity: if you are not a Trump voter, he doesn't care how you think or feel about anything he's doing. He doesn't care that the Republican effort to repeal the ACA would have made insurance less accessible, and far less affordable, to almost all Americans: it mattered to his core (many of whom would've been among the most harmed by the changes), so when it collapsed, he wasted no time blaming the GOP establishment for its failure. He doesn't care that sea levels are rising due to climate change, so that at high tide, streets are now flooding in coastal Florida: his core wants coal jobs to come back, so he's reversing decades of environmental safeguards against the coal industry (even though no amount of deregulation will restore mining jobs lost to automation, not to mention the extent to which the energy sector has already moved on to cleaner and cheaper gas, solar, and wind power). He doesn't care that tens of thousands of transgendered persons already serve in the armed forces, and that their commanders (including the generals he claims to trust) have found no morale problems brought on by their continued service: his base thinks transgendered people are icky, so he issues a blanket ban on their recruitment and service in the armed forces.

I could go on detailing ways in which Trump is the panderer par excellence, but I think you get it: this man is not our President. Unless you're wearing a MAGA cap and waving a MAGA flag, Trump does not care what you think, and will not do anything to promote your wellbeing. He is not there for you. He's there for his base.

That's really not how representative politics is supposed to work. The founders envisioned a system in which voters chose from a menu of well-qualified politicians who possessed the education, experience, and wisdom to be servant leaders for all their constituents. Congress and the President were entrusted with a sacred duty, the solemnity of which was captured in their oaths of office. They were to be defenders and promoters of the Constitution, to uphold the rights it guaranteed, and to never forget that they served not just their voters, but also those who did not vote for them.

We have had fractious leaders, leaders who gloried a little too much in the power granted them by winning an election. Most recently, George W. Bush famously spoke of spending political capital to privatize social security--a statement and approach that cost his party control of Congress. And going back much further, I remember feeling very much that neither Ronald Reagan nor George H. W. Bush represented my beliefs while President. And yet, I would never have disowned either one of them. As an expatriate living in England for two years, I would speak of "my President" with a sigh and an eyeroll, much as I might have talked about a relative or in-law I was embarrassed to have. "Yeah, he's a jerk; but he's my jerk." The implication was that it was my job, as an American citizen, to seek to rein in the bad policies of my President, with the help of the legislators I had elected to represent me in Congress. And always, I knew that, even as my President enacted policies that offended me, he was doing it for what he perceived to be the best interests of the nation as a whole. I might vehemently disagree with him about how he saw those interests, but I never doubted that was his primary aim. Ronald Reagan built up the nuclear arsenal to protect the country. George H.W. Bush prosecuted the Gulf War to defend American interests. George W. Bush did his own version of this in Iraq and Afghanistan. Presidents Clinton and Obama also had policies with which I disagreed, and Clinton disappointed me horribly, but I never doubted that either of them took seriously his responsibility to be President to all Americans.

With Donald Trump, I can no longer say this. He is the first President in my lifetime whose ambition in seeking office was anything other than serving the nation as a whole. Trump was elected by voters who believe Making America Great Again means harming a substantial number of their fellow citizens, and since taking office, every policy he has enacted has been for the express purpose of pleasing those voters. No amount of lobbying on the behalf of the rest of America will move him from his single-minded pursuit of Trump voter approval.

When the Constitution gave Congress the power of impeachment, it was with the explicit understanding that Presidents may commit crimes that are not defined by the law codes of states and nations. In fact, for the good of the nation, the President is immune from prosecution by any regional entity. He may, however, commit high crimes and misdemeanors that transcend these codes; crimes against the Constitution that have to be addressed by a criminal court higher than any other: the United States Senate.

In styling himself President solely of his base, Donald Trump has violated his most sacred responsibility. He has proven himself unfit to be President of the United States. He is not President to the majority of Americans. It is the solemn duty of Congress to hold him accountable to the oath he took at his inauguration, but has violated every single day he has been in office: to faithfully execute that office; and to preserve, protect, and defend the Constitution.
Labels: Constitution Donald Trump impeachment MAGA
Location: Portland, OR 97229, USA