The view this morning from Mt. Tabor, looking toward downtown Portland.

The Mt. Tabor summit is usually an easy climb, especially from the parking lot by the amphitheater. I made it from there to the top in about fifteen minutes this morning without...

Nope, can't say "breaking a sweat." Nor can I say "breathing hard." In fact, I did both, but not because I'm out of shape or the climb was tough.

It's also too damned hazy. With the heat came a plume of foreign smoke, carried by high winds all the way from wildfires in Banff National Park in Alberta, where we were a week ago and I took this picture: 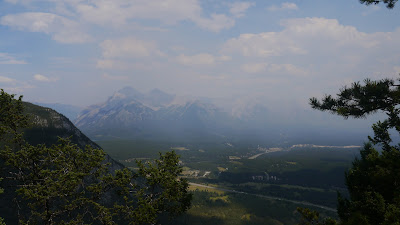 We in the Pacific Northwest are experiencing--well, I can't call it "unseasonal" heat, since if we're going to have high temperatures, summer is the time for it to happen. So instead, I'll just say it's hotter than usual (in fact, we're setting records this week), the heat is lasting longer than it usually does. Summer is typically our dry season--the rest of the year runs from moist to sopping--but since we had an extremely wet winter, we were hoping for fewer wildfires this year than in previous years (two years ago, we were smoked out of an outdoor play at the Ashland Shakespeare Festival). Alas, the record heat took care of all that reserve moisture, at least up in Canada, and now the smoke from those distant conflagrations is settling over Portland.

That's made for some odd experiences. Last night, as I walked down the block to check the mail, I found my mind playing tricks on me. I was flashing back to trips I made to Southern California in the 1980s and '90s. The reason, I quickly realized, was the smell of the air, an odd tang my brain interprets as fresh, even though I know it's ozone trapped by smog. Yes, the combination of heat and smoke has Portland smelling like LA.

Amy and I went out last night (it was our anniversary), and as we traveled on the Sunset Highway, we read traffic signs requesting we limit driving due to a smog advisory.

At home, we benefit from air conditioning, as do more than two-thirds of Portland residents. We pride ourselves on only using it a few days a summer, and most years, we can get away with that. Given normal summer temperatures that top out in the 80s, we can keep the house comfortable by carefully coordinating the opening and closing of windows and blinds, with ceiling fans maintaining circulation. Once the temperature rises above 90, though, we seal the house up and turn on the noisy compressor. While the majority of homes in this area are now so equipped, this is the first air conditioned home I've lived in in my 33 years in the Willamette Valley. People living in older houses and apartments are not as fortunate: unless they've upgraded to air, many of them will be sweltering, pushing hot air from one room to another with fans that can only simulate cooling. Some will have suffer health consequences as a result.

If you live almost anywhere else in the United States (Alaska excepted), you may find it amusing that we Northwesterners are having frightened, even panicky reactions to this heat. I've been to school in Illinois and Texas, and have spent summers on the East Coast, so I know heat like this is nothing new to you. Please try to understand that what's happening here is an extreme that we're not equipped to handle. Oregonians are used to things being cool: we put on shorts (and some of us sunbathe) when the temperatures got into the upper 50s, and when it hits 80, we start to get out of our depth. Three digit temperatures are a shock to our entire culture. We just don't know what to do with it.

And yes, we're the same when it comes to snow. The reason is simple: this is a place of moderation. As rainy as it gets in the winter, it rarely approaches being torrential. Mostly it's just gray. And during the summer, we usually have cool enough nights that leaving the windows open can keep the house comfortable all day long.

People who move here from other places often complain about those temperate conditions. "I miss the seasons," they say. "Where I come from, you can ski to work all winter long!" "Back in Arizona, you could cook a whole dinner on the sidewalk." Stuff like that.

As humorous as it may be to the rest of America that we're having a hard time with the heat here in the upper left corner, this should be a sobering phenomenon to all of us. When even the most temperate of regions is too hot to handle, when the air is hazy with smoke from the far north, one has to wonder: how much hotter must it be in the sun belt? How much longer will summers be habitable in places where temperatures are now topping not just 100, but 110, even 120? Are we going to see a migration to the northwest? To Canada? Where will those people go when even Alberta is too hot to tolerate?

Climate change is as real as the tang in the air that made me think for a moment I'd died and gone to La La Land. And it's coming for every one of us.