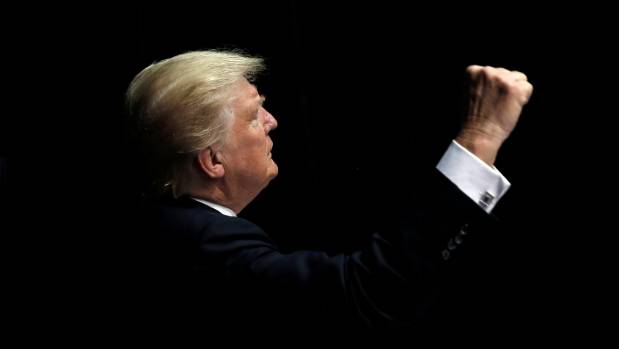 Then-candidate Trump gestures to a crowd during a rally last September.

What did you do during the war?

My generation grew up asking that question of our parents and grandparents, and all of them had answers. Many of our fathers served in the armed forces. Some of our mothers were also part of the military. But you didn't have to be a soldier, a sailor, a pilot, or one of the many behind-the-lines support personnel to have stories about the war. Everyone was impacted in some way: much of the American economy pivoted to support the American role in the war, with major industries retooling to produce tanks instead of cars, guns instead of appliances. Those who stayed behind learned to get by with what they had, nursing older cars along at lower speeds to conserve rationed gasoline; or simply to do without.

I can't begin to imagine what it was like to try and live a normal life during this time. It's not that I haven't had to live with things hanging over my head: divorces, custody proceedings, unemployment, health issues, hospitalizations, enough stress to make the Dalai Lama chew his fingernails to the nub. But all these crises have been short-term, the longest of them lasting about a year. The generation of Americans who were adults during World War II were just coming out of a global depression when Hitler began invading neighboring countries. By the time the war had run its course and the troops had come home, it had been almost twenty years since the country had felt anything resembling security.

And yet, somehow, life continued normally for most Americans. Children went to school, doctors saw patients, lawyers argued cases, farmers tended their crops, preachers delivered sermons, detectives investigated crimes, almost as if there wasn't a genocidal war consuming Europe and Asia. To me, this is what makes the "greatest generation" so great: that somehow, they kept their nation, their culture, their identity intact so that, when the soldiers finally came home, they could more or less pick up where they'd left off.

It's inconceivable that the war wasn't constantly on their minds. Many of them had spouses, sons, daughters, or siblings overseas, close to or on the front lines, and millions more were employed in some aspect of the war effort. On top of that, there was the unavoidable knowledge that powerful empires had sworn to destroy not just our allies, but our homeland. Those who lived on the coasts probably scanned the horizon several times a day, looking for enemy planes or the outline of a battleship come to shell their town. That these threats never materialized is a testimony to the Americas' geographical advantage: it was just too expensive for the Axis to expand the war to our shores. And yet, the participation of so many of our young adults in the conflict brought it so much closer. Even if our cities were not being bombarded, even if German and Japanese troops weren't occupying our territory, millions of us were over there, in harm's way. Their loved ones must have lived in constant fear of the official military car pulling up in the driveway, the solemn uniformed officers knocking at the door, bringing news of another young life cut short by an enemy bullet.

To have endured such a thing, to have kept calm and carried on, is to have been a nation of heroes. The youngest surviving veterans of the war are in their 90s; their parents are long gone. This grieves me, because I find myself craving the wisdom of the people who kept the country running, who kept on working and loving and living just as they would had their children not been thousands of miles away facing machine guns, mortars, bombs, shells, and torpedoes. How did they do it? How did they keep from breaking?

I pose this question because I am feeling, for the first time in my life, and perhaps for the first time since the 1860s, that the United States of America is at risk of collapsing. The Presidency of Donald Trump is more dangerous to this nation's continued existence than any threat since we fought the Axis powers in World War II. And yes, I know I'm leaving out the Cold War in its entirety, as well as 9/11. The continued occupancy of the White House by this man is destabilizing American relations with all of our allies, and stirring up trouble with less friendly countries we've long managed to hold at arm's length. His diabolical efforts to reverse every forward-thinking policy put in place by his predecessor could leave millions without health care, accelerate climate change, and set off wars in the Middle East and the Korean peninsula.

I'm feeling this more deeply right now than I have since the election. The reason is simple: from November through the second week of June, I was teaching. From the time I arrived at school until I headed home, every moment was consumed either with my students or planning what I would do when they arrived for their next class. Teaching is an all-consuming occupation: when I got home, I had little energy left for worry about what the President was going to do to my country.

But school's out now, and that means I've got all too much time to scan headlines, read stories, and, more and more, let the fear seep into my consciousness from the deep recesses of my brain. I see the horrible things he says about people he doesn't like, the lies he tells and has his minions promulgate, the ways he styles himself as a Shah rather than a President, the foolish gobbledygook he spews whenever he talks about some policy he's put in place without having the foggiest notion how things really work. I see the expressions of those around him at public events, their disbelief that the President of the United States is saying these things, doing these things, and expecting the world to smile and nod at how smart and noble he is. I read about how many of our allies are leaving us behind as they move forward with environmental policies and trade pacts that, just months ago, had been drafted under American leadership. Whenever I pick up my phone, there is more for me to shake my head at: the EPA trying to scale back emissions regulations, the Justice Department devoting its energies to deporting nonviolent immigrants, HHS trying to phase out Medicaid. And now North Korea: seeing that sabre-rattling is not working, that they're going ahead with nuclear missile tests despite all the fuming and threatening things this President says, I have to wonder if they're convinced they (like Trump) can get away with murder. Until they can't, and Trump decides to declare a way without consulting Congress, because his whisperers say he can, anytime he wants to. He's the President, after all. He can unilaterally start wars in two hemispheres anytime the impulse drives him to do it.

I don't want these things on my mind. I want very much to be able to enjoy my vacation: to exercise, to tend the roses, to visit my new grandchild, to take my family to Banff, to watch superhero movies, to begin planning for the new school year, to witness in awe the first total solar eclipse to appear in this hemisphere since 1979, without having Trump constantly looking over my shoulder. And yet he's there, all the time, threatening just by his presence to blow everything up.

How did my grandparents do it? How did they keep everything normal for so long, with so much happening all the time? How were they not paralyzed with dread? How did they manage not to spend every waking moment with their heads under pillows, weeping?

I know a lot of it is in the choosing. So far, I'm simply choosing to live as if this were still a normal country. But for how long can I do this? When does the dread of what he might do next began to influence my planner? When does his smirking face move from the rearview mirror to the windshield?

And if we make it through this time unscathed; if, miraculously, the nation and world survive the Trump Era intact; then what? Twice in the last century, the Constitution was amended to protect the office of the President from contingencies not imagined by the founders. In response to Franklin Roosevelt being elected to four terms, and finally dying in office, the 22nd Amendment instituted a two term limit, the better to avoid an imperial Presidency. After the assassination of John Kennedy, the 25th Amendment established procedures for removing a President who had become incapacitated while in office (a situation which had actually already taken place toward the end of the Wilson administration, and could have happened again with Kennedy, had he survived the bullet wound to his head). That amendment may yet be the undoing of Donald Trump, who demonstrates daily that he is unfit for the office he holds. Once he's gone, though, I hope the nation will seriously consider another Presidential amendment, one that establishes some kind of pre-screening procedure for anyone who would aspire to the office. At present, there are really just four requirements for the Presidency: to be at least 35 years old, to have been born an American citizen, to have lived in the United States for the last 14 years, and to have received a majority of votes from the electoral college. We don't require that the President be of sound mind and body, have a minimum level of education, have a sterling work record, or even pass a basic background check. There are far more requirements I had to pass through to be a public school music teacher than Donald Trump had to become President.

Keep calm. Carry on. And twenty years from now, when your children and grandchildren ask you what you did during the great Trump Crisis of 2017, you'll be able to tell them, just as my parents and grandparents could tell me, if they weren't too humble to admit it: we saved America.
Labels: Donald Trump greatest generation Trump Era Trump Regime World War II
Location: Portland, OR 97229, USA