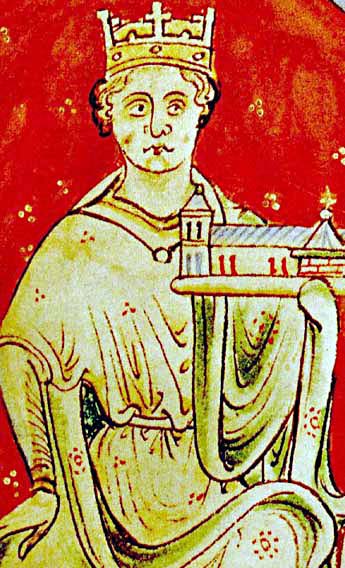 There is broad consensus among both supporters and detractors of the Trump regime that the President's slogan--"Make America Great Again"--is an appeal to nostalgia. Ah, for the good old days, when men were men, women knew their place was the kitchen and the boudoir, and people with natural (as opposed to tanning booth) pigmentation stayed on their side of the tracks. Since coming to office, though, Trump has been evoking good old days far older than the 1950s. He's styled himself an autocrat who's above the law, who takes his unpopularity as license to simply ignore those who disagree with him--when he's not publicly attacking them, even referring to them as enemies. This is not a President for all the people, or even for the narrow slice of the people who voted for him (which, I'll remind you, was around 18% of the population of the United States): he exists to satisfy just one constituency, himself.

That's not just autocratic, or even anti-democratic. It's medieval. Don't believe me? Consider the reign of John Lackland, king of England from 1199-1216, a man so petty, spiteful, and cruel that his own barons rebelled against him. John considered himself above the law, his crown giving him the authority to seize property and imprison, torture, and execute any who disagreed with him. The civil war against him led to the creation of Magna Carta, a seminal declaration of property rights he was forced to sign, though it is historically significant more for its existence than its effectiveness. Prior to that moment in 1215 when John affixed his seal to the document, England had operated under a system of mostly unwritten traditional rules of chivalry. Magna Carta spelled the beginning of the end of feudalism, though it was to be hundreds of years before Parliament began to accrue democratic power apart from the nobility.

And this is the era Trump harkens back to most fondly. He genuinely believes being President gives him license to ignore the ethics rules that apply to every other elected official in the United States. And he's stacked his Cabinet accordingly with millionaires and billionaires whose conflicts of interest dwarf those of any previous administration. Hypocrisy? Compassion? Respect for the rule of law? Belief in the Constitutional principles that are the true greatness of America? Simply common decency? All these things are for wimps. They're making America small, weak, impotent. Checks and balances are obstacles to power, regulations prevent investors from wringing every last penny out of the environment, and the media are pedantic nags who just can't get with the program of lauding the king for his greatness.

Trump's campaign was all about giving voice to white working class voters, people who've felt neglected as America has become multiracial, multiethnic, multisexual, and as its economy has shifted away from manufacturing and resource exploitation and into service and technology. These were his constituents, his vassals, his serfs, and he promised repeatedly to look out for them, to defend their interests, to find them jobs, to guarantee them health care; and he did it all to the refrain of "believe me." These aren't just the words of a huckster: they're the themesong of an utter despot. Trust him, put your faith in his compassion, his benevolence, his generosity. Should the ruler deign to smile, who knows? Perhaps a few dollars will trickle down into your wallet, enough to buy a dozen eggs, a bus ticket to the unemployment office that's been closed due to budget cuts.

Many have compared Trump to fascist leaders of the Twentieth Century, and there are certainly apt parallels. But really, when you look at how he views the world, and how he's acted since taking office, can there be any doubt but that this really is our King John, a despot so corrupt and mercurial that it's going to take a 21st Century Robin Hood to bring him down?
despotism Donald Trump feudalism John Lackland King John Magna Carta Middle Ages
Location: Portland, OR 97229, USA