But Is It Blasphemy? 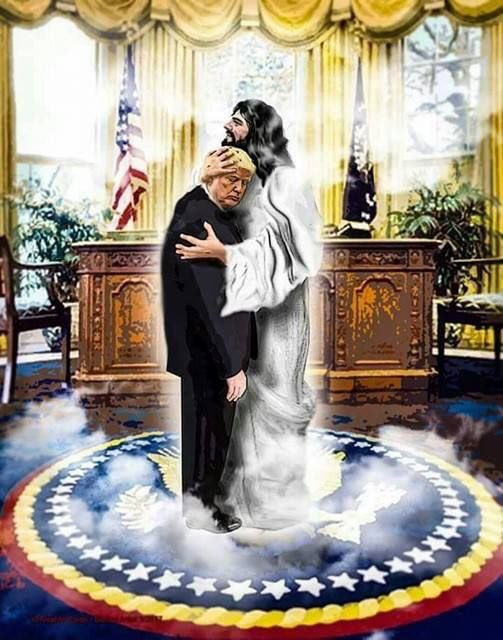 But seriously, let's start with the provenance of this piece of...art. Two days ago it went up on a
Twitter feed attributed to Tiffany Trump, but most likely a fake. It was accompanied by this prayer:


Dear Lord, I pray in the Mighty name of Jesus, that you would give Donald J Trump wisdom and that you would protect him and fill him with Your Spirit and help him to withstand the fiery darts of the enemy.

Now, in and of itself, there's nothing remarkable about such a prayer. The language is consistent with evangelical prayers for politicians perceived to be friendly to conservative Christianity, up to and including a nod to the opposition that associates them with demonic forces. Associating it with this picture--which, I learned from a quick Google search, has been in circulation at least since January, long before the faux Tiffany Trump turned it into an Easter tweet; though I was unable to identify the artist who put the image together--gives the prayer a different spin, however.

Trump is depicted as weary, hurt, in need of comfort, which a scarily tall Jesus seems happy to provide. He's even wrapped the controversy-battered president in his halo, perhaps in preparation for taking him directly up to heaven, thus skipping over the messy business of growing older, getting sick, and dying that the rest of us are condemned to. And before you leap up in defense of Jesus rapturing such an undeserving excuse for a believer, look at it this way: the sooner Trump's gone, the sooner we can breathe easier that we won't be getting into a nuclear war with North Korea, Russia, and anyone else who irritates our mercurial leader. So rapture away, Jesus. Please.

But back to the image: if this picture really did first appear in January, there's something very prescient about it. In January, Trump was riding high, boasting of his huge" margin of victory, the enormous crowd who'd turned out for his inauguration, the stack of executive orders he was proudly signing without taking the time to read their contents, the long list of anti-secretaries he was nominating to the Cabinet, and all the good he could not wait to undo with the help of a unified Republican Congress. Trump and all his surrogates were fountains of deceitful braggadocio, blissfully ignoring--when they weren't condemning as "fake news"--every fact, however obvious, that was tendered in opposition to their lies. Are we really to believe that the President's ego was so fragile that even then, just days into the biggest, brassiest, most beautiful Presidency ever, he already needed a holy shoulder to cry on?

Maybe the unnamed artist was seeing the writing on the wall, the unavoidable signs of the times that pointed to Trump not so much Nebuchadnezzar--the Babylonian emperor who, chastened by the prophet Daniel's teachings, repented of his sins and retained his empire--as his son Belshazzar, whose corruption led to the conquest of Babylon by Persia. Indictments, even impeachment, are coming not just for Trump, but for many of his family members and cronies. The regime will come down and, worst of all possible outcomes, Donald Trump will be humiliated and branded a loser. He'll need a shoulder to cry on then, and with all his followers already locked up, where can he turn but Jesus? Who knows, maybe this chastening will finally get him to turn from his selfish, evil ways.

I hope that's what the artist had in mind. If so, it breathes just a touch of value into this gauche piece of religio-political schlock.

But all of that is erased by the prayer that was tacked onto it by Tweeter--who, as noted earlier, is almost certainly not Trump's neglected other daughter, Tiffany. This prayer delivers the unsubtle message that all the obstacles in the way of the regime's agenda have been placed their by ungodly  Democrats, enemies who never tire of casting darts at the tender sensibilities of our poor sad President. Sad little boy. There, there. Take it to the Lord in prayer. He'll take that burden from you, ease your mind, soothe your soul, make all the bad people go away. What's more, he knows what it's like to be tortured and crucified for promoting God's agenda of enriching the rich and taking food, shelter, and health care away from the poor while simultaneously flooding the earth, sea, and sky with all the pollutants that have been kept bottled up until now by those nasty environmental laws. And don't even get me started on how much God hates immigrants.

Wait, what's that your whispering in his ear, Jesus? "I suffered and died for the exact opposite of everything you're doing." No, that can't be right. After all, he told us to believe him, told us again and again that he was doing the Lord's work, looking out for the little guy, protecting his followers from the evils of political correctness and all the dangers that come with welcoming people with brown skins within our borders.

"Oh, for Christ's sake," Jesus continues to whisper, loud enough this time that it leaps right off the canvas, "has any of you ever even opened my book?"

Because if you had "Tiffany Trump," you'd have seen plenty in there about caring for the poor, protecting the rights of the oppressed, welcoming the stranger, giving all your money to just causes, leaving all your earthly possessions behind to follow in the footsteps of the homeless messiah, and being ready to suffer and die for the salvation of others.

In all seriousness: I've been a frequent critic of Christianity in general, and the United Methodist Church in particular, since long before I began writing this blog. I have great issues with much that is considered Holy Scripture, as well as much that is dogma to even the most independent of churches. I don't come by these criticisms from a place of ignorance or of kneejerk rejectionism: I'm seminary-trained, ordained, and between seminary and my sometimes overlapping ministries of the pastorate and sacred music, I devoted almost thirty years of my life to church work. I've known thousands of Christians, most of them sincere, many of them people I admire and respect. I empathize with the many believers who are caught in the struggle between taking the Bible seriously and deciding how much of it to disagree with.

With all that said, I really have no patience for those Christians who've become so partisan they will slap a Jesus sticker on the most heretical of hucksters just because he'll advance a couple of their pet agenda items. No matter how rabidly you may believe in recriminalizing abortion, that cannot outweigh the thousands (perhaps even millions) of innocent men, women, children and, yes, babies who will die horribly if even a fraction of Trump's campaign promises become law--not to mention how many millions more are at risk from his latest reversal, his suddenly Hawkish approach to dropping missiles and bombs on Syria, Afghanistan, and possibly North Korea.

So yes, I'd like to think Jesus is right there in the Oval Office, wrapping Donald Trump in his arms, preparing to rapture him right up to heaven, not because he deserves it, but to save the rest of us--all seven and a half billion of us--from the wrath that will come if he ever stops shooting himself in the foot, and starts putting any of his plans into action.

And seriously, where would Trump be safer from the darts of mean old liberals like me? The White House? Trump Tower? Mar-a-Lago? Or altogether out of this world?
blasphemy Christian art Donald Trump evangelicals Jesus Jesus hugging Trump rapture schlock
Location: Portland, OR 97229, USA