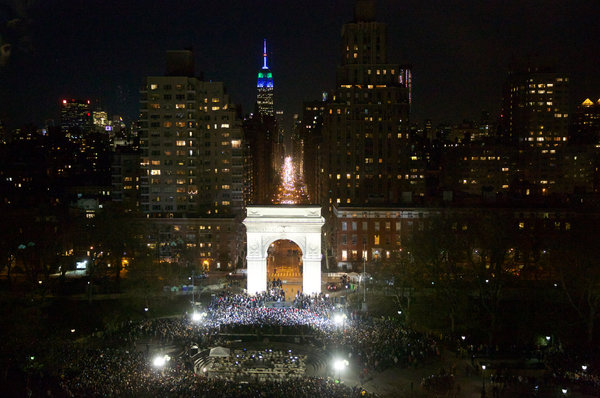 This photo of the Bernie Sanders rally appeared in the New York Times. Really.

Bernie Sanders is a having a moment, and it's not hard to understand why.

We who are on the left side of American politics have been living in exile for a very long time. The last President who came close to fully embodying our ideals of government serving the needs of the people was Lyndon Johnson. Yes, that Lyndon Johnson: the misogynist power broker whose rhetoric didn't stir anyone's heart. No President since Johnson has been able to produce anything approximating his massive progressive agenda. Carter and Clinton were moderate squishes, and Obama has been hamstrung by reactionary obstructionism at both the grass roots and Congressional levels.

That's almost half a century of progress by fits and starts, with frequent slides backward. Speaking for myself, I'm frustrated. As happy as I am to see so many more people covered by health insurance, the byzantine mess that is Obamacare falls far short of the streamlined elegance of any other developed nation's single payer system. The cost of college has risen to obscene heights, even as the availability of financial aid has plummeted. The super wealthy pay far too little in taxes, corporations have more clout in Washington than voters, infrastructure is crumbling, Congress is locked in a perpetual cycle of stonewalling and recrimination--I could keep adding to this list, but today is an extra day off for me, and I'd rather not start it out in a blue funk over the state of the nation.

I'm far from alone in my despair over the insolubility of these problems. It's no wonder, then, that Bernie Sanders's unapologetically socialist agenda has garnered the support of so many of my friends, people with whom I feel politically in tune. As President, Bernie will raise taxes to pay for a single-payer health care system and fully funded college tuition for all Americans. He'll break the spell that corporations have on Washington. He'll remake this nation in the image of a European social democracy.

Opposing him in his quest for the Oval Office is Hillary Clinton, a candidate who excites no one. She's vastly more qualified to run the country than any candidate in the last decade--and yes, that includes our current President, as well as everyone else running this year--but it's hard to get excited about a technocrat, however knowledgeable, experienced, and competent she is. To the extent she's been a successful politician, it's because she's practiced the art of compromise, so of course she's taken positions in the past that must now be explained or disavowed. She's not a gifted orator like Barack Obama, and she doesn't have a populist agenda like Bernie Sanders, so we're not likely to see her pumping up the volume at huge rallies like the Sanders event pictured above.

Despite all that, I expect she will be our next President. With their xenophobic rants, the clowns contending for the GOP nomination cannot hope to win a majority of any American demographic except older white males. And as for Bernie...well, here's the hard part, the part my friends don't want to hear, and that several of them will probably excoriate me for saying (as they do every time I write about it): he's not going to win.

But he's been winning, they'll say. Look how many states he's won just in the last two weeks!

Sorry, folks, but you don't get the Democratic nomination by winning states. You don't win the Presidency that way, either. You get it by receiving the most votes. As of today, Hillary Clinton has received 9.35 million caucus and primary votes. Bernie Sanders has received 6.95 million (and that's rounding up). Clinton has a 2.4 million vote lead. In terms of Democratic convention delegates, that translates to 1289 for Clinton, 1038 for Sanders. Add in pledged "super-delegates," and the gap grows to 1758 to 1069. It's worse for Sanders than it looks from those numbers: much of the ground he's made up in the last two weeks has come from winning caucuses, which bring out a disproportionate share of party activists compared to primaries, which more closely reflect the general population of each party. Voting populations in the remaining primaries--which include the delegate-rich contests in New York and California--will be far more diverse, a factor that has consistently favored Clinton over Sanders. The gap is going to grow, not shrink.

How will my Bernie-believing friends react when it does? If the last few months on Facebook are any indication, I'll see them posting links to articles that blame the system and the media, as well as articles that insist "he can still win this."

Concerning the system, which is seen to be stacked against Sanders: that system is democracy. The Democratic party doesn't use "winner-take-all" primaries like the GOP does, so it's possible to "win" a state and only see a gain of a handful of delegates. That should be encouraging to those of us who believe the electoral college is a relic of our oligarchic past, and that the winner of the popular vote should be the President (which would've given us President Gore in 2000--imagine how different things would be if that had happened): if a candidate wins 51% of the vote in a given state, he or she gets as close to 51% of the delegates as math will allow. Even a 75% win doesn't get a candidate 100% of the delegates, because that's just not how true democracy works.

And for those who've been talking (Bernie Sanders, himself, among them) about losing the pledged delegate vote, but then convincing the superdelegates to throw the nomination to him: the word for that is coup, and it's anti-democratic. If your beef with the system is that it needs to be more democratic, then stealing an election from the person who got the most votes shouldn't even be on your radar.

Concerning the media: again and again, I see the complaint that Bernie Sanders is being ignored by the mainstream media. It's just not true. If anything, the media have given the Democratic race much more coverage this cycle because of Bernie Sanders. As long as it was just Hillary Clinton contending for the nomination, there really wasn't any reason at all to focus on the blue side of the eventual ticket. The Republican race was far more interesting, and ratings backed that up. Once Sanders began to pick up steam, though, the Democratic race became a contest. It's in the interest of the mainstream media to make it more of a horse race, in fact: inevitability is boring. The media want eyeballs, whether they're reading or watching, and eyes are drawn to uncertainty. So there's plenty of coverage of the Sanders campaign--though you wouldn't know it from that campaign's press releases, or from the Sanders supporters who believe them.

Accompanying it was this caption: "No this is no rock concert this a Bernie Sanders rally in New York ..No news media covered."

That didn't sound right to me. In fact, I'd heard at least three mentions of the rally in the podcasts I listen to in my car, not to mention seeing plenty of references to it on Facebook that didn't make the "no coverage" claim. So I did what any self-respecting Millennial would when faced with a dubious claim: I Googled "Bernie Sanders New York Rally." My suspicions were instantly confirmed: the top results came from CNN, MSNBC, the BBC, the New York Times, and the Wall Street Journal. The picture at the top of this blog comes from the Times. That's five mainstream media outlets right there, and there were plenty more I could've clicked on further down the list.

Quite simply, anyone who claims the Sanders campaign is suffering from a lack of media attention is either misinformed or lying.

I'm not going to fault the eternal optimists in the Sanders camp who are still hanging on to their hope that somehow, he can win it all the honest, fair, democratic way. That was a nice big rally there, not unlike one I attended in Waterfront Park in 2004 for John Kerry. It's cool when your rally turnout rivals that of a U2 concert. But it's going to take more than 27,000 votes to put Bernie over the top; and even if he "wins the state" by that many, it will only marginally cut into Hillary's lead.

One last thing: there are those in the Sanders camp who are declaring their intention to never vote for Hillary Clinton, even in the general election. This worries me. I've said it before, and I'll say it again: if it weren't for Nader voters in Florida, this nation would not have been subjected to the apocalyptically destructive Presidency of George W. Bush. Those few thousand votes would've been the margin of victory Al Gore needed to push him over the top, to avoid the whole recount debacle, to prevent the conservative wing of the Supreme Court from deciding the election, and from the frat-boys-in-the-White-House free-for-all that followed. Trillions of dollars and thousands of American military deaths, not to mention the conflagration still raging in the Middle East, came out of that quixotic campaign and its deluded insistence that there was no real difference between the candidates.

Please, Bernie believers, don't fall for the lie that a Clinton administration would be no better than a Trump or Cruz administration. There is just too much at stake. If Bernie Sanders does not become the Democratic nominee for President, please cast your ballot anyway for the candidate who, while she will never be as ideologically pure as your guy, is still vastly superior to anyone the GOP will ever nominate.