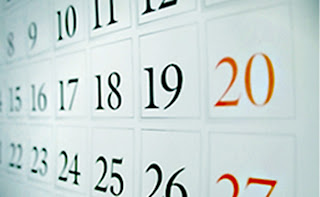 Not counting weekends or holidays, I have fifty-one more days.

That's how much time I have left at Scott Elementary School. On June 15, I will say goodbye to these children for the last time. Where I will go after that to practice my vocation has yet to be determined, but I can be certain of this one thing: it will not be this school.

Fifty-one days of school might seem like a lot to you. If you're not a teacher, or even if you are and you teach in a classroom, seeing the same children every school day, fifty-one days is a significant chunk of time: ten weeks! Two and a half months! More than a quarter!

To most musical specialists, those 51 days equate to 20 semi-weekly classes, typically 30-35 minutes long. That's time for several units, time to learn two or three pieces and prepare them for a final concert.

I say "most" because things are different at Scott. Starting next week, I will see students for music once a week. At Scott, I get them for 30 minutes, including set-up and break-down time.

That's where the mallet hits the xylophone. Ten class sessions is five hours of instructional time. How much can I teach in those five hours? Teaching the Orff way--creating conceptually rich holistic learning experiences that engage students through performance of stimulating music and movement pieces--I can facilitate a lot of learning in that time.

But not as much as I could in ten hours.

And this is one of the many ways in which this very hard year is coming to an even harder end. In September, I came back to school to find that I no longer had even the half classroom I had used last year, not even the gymnasium space I'd had the year before. Mornings I itinerate; afternoons, I can use one corner of the gym, but can only use what I can set up in the half hour between lunch duty and my first afternoon class (and yes, it all has to be put away at the end of the day, every day, to make way for that evening's basketball club and the next morning's PE classes). I also learned that I would only have one time a week to teach music, that the other half hour I'd spend with most of the children would be team-teaching "rhythms" to entire grades in the gym. I was able to convince the principal to give me a rotating extra music time with each class every two or three weeks, but overall, I've had less instructional time with these students than many half-time music teachers.

I will admit here that itinerating has made me a better teacher. Limited to what I can carry, unable to use my Orff instrumentarium with the younger students who find it most motivating, I've honed my skills at engaging students with minimal equipment. For some lessons, all I use is a word sheet and some strips of paper I've written rhythms on. There's no room, or time, for mediocre content or enervated delivery: I've got to bring my best to every class.

It's been paying off. This is the best year I've had with first and second graders. At the same time, the older students have suffered from being back in the gym, where there's just no leeway for children to noodle on their instruments while I work one-on-one. The acoustics necessitate that only one thing be played at a time, whether it's by a single student or the entire class. Much of my precious instructional time is lost waiting for students to quiet down for a few words of instruction.

And "rhythms"? Again, I've been forced to develop skills I didn't know I had: large group management, careful music and activity selection. I don't care for who I become during those once-a-week sessions in the gym, barking at misbehavior through my PA, but I've definitely added some techniques to my toolbox for my eventual return to a normal classroom.

Next week, the quarter-time art teacher comes to Scott. Rather than add prep time to the schedule, the principal lopped off the rotation that gave me that every-second-or-third week extra music class. So I'm back to having gaping holes in my schedule.

If I were just marking time to the end, doing as little work as possible, I'd be delighted by those gaps: time to catch up on my reading! Watch Daredevil on my computer! Blog! Look for a new job! Stay up to date on the Presidential election! Plan a vacation! And some of those things will be happening. There will also be an exhaustive update of my inventory, as well as a carefully worded letter to my eventual successor so he or she doesn't have to make it all up from scratch, as I've had to every time I've moved to a new school. And hey--my grades will be done before the final bell rings on the last day.

But I'm not delighted. Quite the contrary: I'm grieving. I've always gotten attached to children, going back to my first teaching practicum in Education 101. The more time I have with them, the more I miss them when it's time for me, and them, to move on. I've had more time with these kids than any other students in my career; but it's not just that. These children are different: coming from poverty, as so many of them do, they need what I teach, and they let me know how much it means to them. Nowhere else have I felt so appreciated by the critics who matter most to me: my students.

So while other teachers may be counting the days until freedom, I'm counting down something else: fifty-one days until I never see these children again.

To be honest, it's a countdown I've made every year in this job. Things started out hard here, and never really let up. I've never had a job that challenged me in so many ways. When I walk to my car for the last time on June 16, I will brush the dust from my shoes, a symbolic act I've engaged in whenever I make my final exit from a place that has dealt harshly with me. It's not the students I'm brushing off. They're not the reason this school and this district are so hard on teachers. Every year, I've spent the summer applying for other positions that came with a dedicated music room and supportive administrators. This year, finding one of those jobs isn't just a hope, it's a necessity.

But for all the grey hairs and wrinkles I've acquired in these three years, I know when I pull out of the parking lot for the last time, head up Halsey and onto the interstate for the last time, I'll be tearing up. I'll be remembering the squeeze of little arms around my waist, the poorly timed knock knock joke in the cafeteria, the delighted grins as I enter a classroom to begin a music lesson.

If I look hard enough, I know I'll find them in my next school. With my enhanced skills and my far better sense of what makes a music lesson engaging, I expect I'll have the children of John Q. Public Elementary School eating out of my hand by November, and by June, I'll be getting all misty to be saying goodbye to them for the summer. I'll get attached all over again, and it will be joyous and moving and a little melancholic, and I'll love every minute of it.

But they won't be these children.