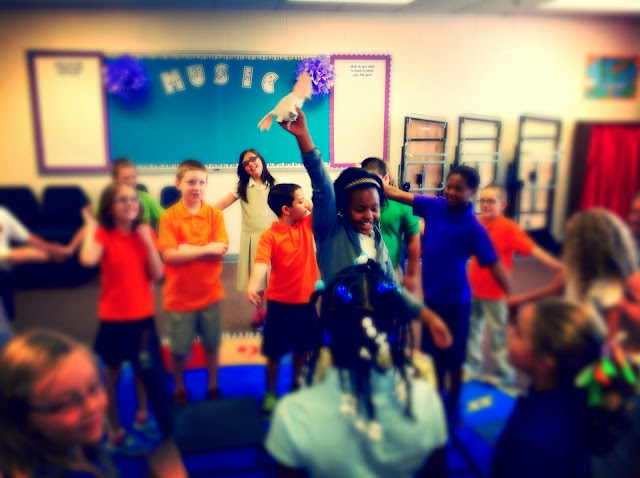 It may be a stock photo, but this really is what engagement looks like in a general music class.

Let's be clear about one thing: I can keep children engaged without teaching them anything about music. When I do, they look and sound exactly the way they're supposed to--in their home room.

I do it by telling them stories. Sometimes I use puppets. Sometimes it's enough just to read them a picture book. When I'm doing these things, I'm using skills I mastered in my years as a pastor, tapping into narrative preaching techniques that held the attention of multi-generational and multi-ethnic congregations in Illinois, England, and Oregon. Preaching was challenging at first, but the more I practiced it, the easier it became, until I found myself able to reel off a sermon on the spot with little or no preparation. It was improv without a scene partner--except when I did it for African-American congregations, whose responses are very much a part of the sermon--and it was the one thing about being a pastor that I did very well.

So I can do that with my kids. I sit them down, I say "Once upon a time" or "Long ago and far away," or perhaps I have a quick exchange of questions to lead into whatever story I'm going to tell, and I've got them in the palm of my hand for as long as it takes me to reach the end of the story. I love doing it, love seeing their reactions, hearing their giggles at the funny parts, the way their hands thrust instantly into the air when I need a volunteer to use a puppet or play a small part in the narrative.

Make no mistake, though: there's not much I'm teaching these children when I tell them a story, anymore than if I was showing them a video. I'm entertaining them. Anything they learn along the way is a bonus. That's why I use these stories sparingly: as much as I love telling them, and as much as the children enjoy hearing them, I can only justify them to the extent that I can make them hooks upon which to hang a music lesson.

And here's the thing about an engaging music lesson: it looks and sound completely different from story time. The children are singing, moving, playing instruments. If they're being at all creative (and if the teaching space is right, that's something to be encouraged), the class will seem chaotic at times. There may be moments where the entire class grasps a concept at the same time, and performs it so brilliantly together that it's like a big bang of music-making; but more typically, there will be some children who just don't get it, but are fully engaged anyway, and in ways that drown out the learning of the others. This can be hard for non-musicians to appreciate--at times, it even tests my patience--but it's actually a good thing.

At least, that's what I'm going to tell myself the next time it happens--and carefully explain to my principal the next time she's horrified by it.

I write this because yesterday, at a workshop featuring master teacher Thom Borden, I heard something that made such perfect sense that I felt like slapping my forehead and saying "Duh!" I didn't follow through on that impulse--it would've been rude and disruptive--but seriously, how have I come this far, teaching for fourteen years, and not grasped the simple truth that children play instruments loudly because they're over-, not under-, engaged?

Thom talked about the need children have to express their excitement at playing a drum or recorder, or wave a scarf, or yank on a stretchy band, or whatever other object I put in their hands, before they can settle down and acquire the deeper learning that the lesson seeks to impart. He also spoke of those moments in a lesson when, reading the signs of the times, we teachers have to realize it's time to move on, even if not everyone's had a turn, even if the part hasn't been played to perfection, because if we don't, we'll lose the whole bunch of them as their over-engagement spins off into a train wreck.

These are fundamental music room behavior management concepts that made sense to me because I've seen the dynamics at work in my own lessons. I've had moments when I've insisted on sticking with teaching a skill to every student even though the half of the class who've already mastered it are so bored they're on the verge of breaking into loud conversations. I've wasted valuable minutes of the one half hour I get with a class trying to get them to all stop drumming so I can introduce the lesson. I've taken instruments away from children who want nothing more than to make music because they're not waiting for me to tell them how to play them. I've erred again and again on single-minded sanity for myself and (if she's in the room observing) my principal. And I've done it at the expense of the children's music education.

Far better to channel that enthusiasm into a warm-up activity that communicates to the over-engaged child that yes, you will get to play today, in fact you'll be playing a lot, because you'll learn much more by playing that drum than by me talking to you about it; so let's jam for a couple of minutes, bring it to a good solid "STOP," give me thirty seconds to introduce the concept, and then go back to playing.

Ugh. It's so obvious I'm feeling again like pounding myself on the forehead and chanting, "Duh! Duh! Duh!"

I know I'm being too hard on myself. I know the reality is that the two and a half years I've been teaching at Margaret Scott School have been like a journeyman period for me as an Orff teacher. I've had to learn how to teach in a variety of settings, with all manner of distractions, sometimes in a well-equipped space, this year with only borrowed space, sometimes in a room with excellent dry acoustics, this year (again) in a horribly echoey gymnasium. Apart from the equipment and the space, I've been teaching classes of children that almost all come blessed with high flyers who are frequently the bane of every teacher in the school--and who, handed an instrument, become instantly over-engaged (I'm studiously avoiding the word "over-stimulated," thanks to Thom's workshop).

Don't be deceived by my appearance. Even though I'm at an age (going on 55!) when most veteran teachers are considering early retirement, and have long since mastered techniques of classroom management, I've really only got eight and a half years of full-time general music teaching under my belt. And especially when an administrator makes a face at the noise-level of what's happening in the music room, or chides me for not having 100% of the children listening to every word I say, or for not having multiple ways of presenting a lesson so as to reach diverse learners who clearly aren't getting it because they keep banging on that damned drum instead of paying attention, I'm going to try and accommodate those concerns. But when I do, it's at the expense of the children who just need to move, to make a noise, to express themselves in ways that are disruptive in a general classroom, but if properly channeled, can actually enhance their experience in the music room.

Thom spoke about how every lesson needs to have a "gem," an Easter egg that makes it special to children: a moment of silliness, a twist in the choreography, a surprise buried in the song that makes them smile. For me, the gem of his workshop was this teaching about engagement. Plugging it into my personal educational credo, I've got a goal for as many more years as I'm able to practice this discipline: to engage all my students as musically as I can when I'm telling them a story.