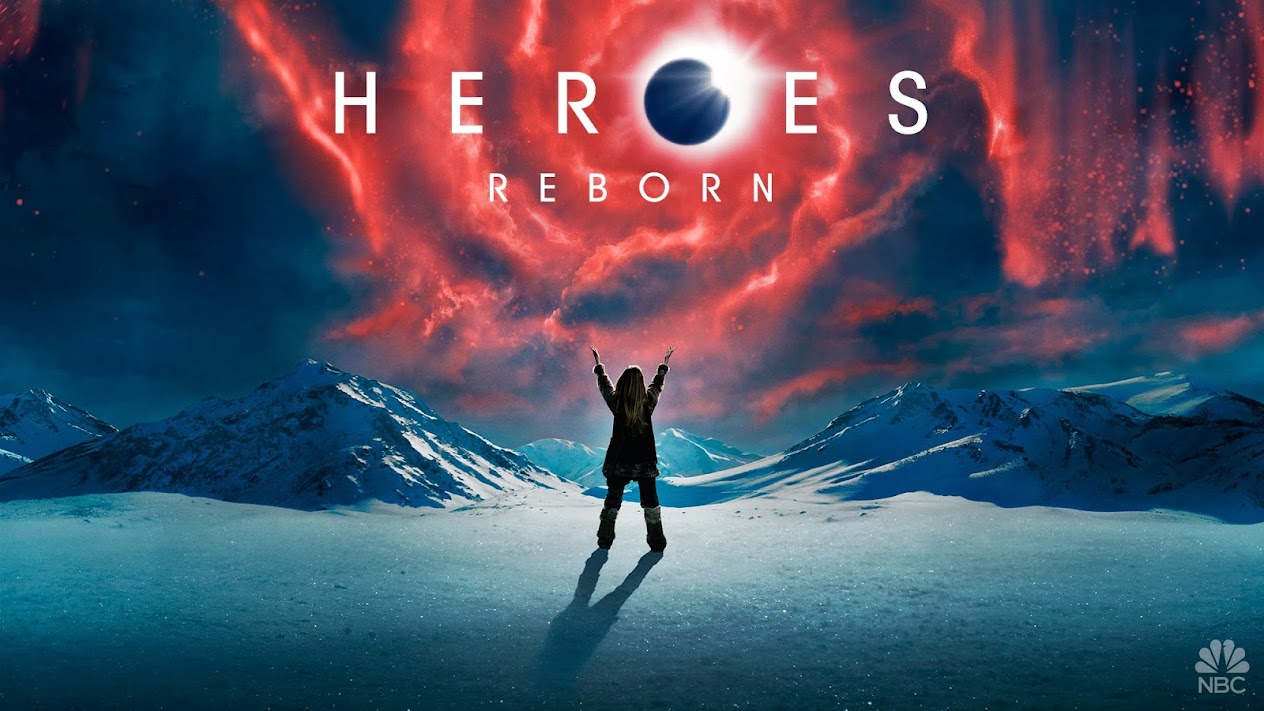 If you missed it when it was on, you can probably see it on demand. But don't.

Once upon a time, there was a TV writer who took a whole mess of comic book tropes, added conspiracy theory, sprinkled in a thrilling serial killer plot, and came up with a serialized drama that was original, funny, and compelling. The characters were multi-cultural and multi-generational, and their powers ran the gamut from traditional (flight, super speed, invulnerability) to awe-inspiring (teleportation through time and space, as well as the ability to stop time) to ridiculous (the serial killer could take on the power of every hero whose brain he consumed, so that by the end of the series, he was so invincible nobody could figure out what to do with him). Over the course of its four-season run, it fell victim to convoluted conspiracy-spinning and the kind of bombastic stakes-raising that has become de rigeur for movies in the Marvel universe (Antman blessedly excepted). How many times can the Earth be almost destroyed before our fear turns to yawns? Heroes went there early and often, so much so that four seasons was probably more than enough. And yes, I watched every episode--79 total, the same number as the original series of Star Trek (though the comparison ends there). But then, I was a Lost junky, too.

When I heard it was coming back after a five year absence as Heroes Reborn, I had hopes that this might be a chance to clean out all the silliness that had progressively turned the original Heroes from a pleasure into a hate-watch. I eagerly set the DVR to record, and was intrigued with what I saw: a renewed X-Men-type world in which the people with powers are suspected, discriminated against, even hunted down, coupled with a Watchmen plot line about a city's destruction being pinned on them. But at the heart of this reboot was yet another rotten core of conspiracy, one that became more ludicrous with each passing episode. The parts that worked kept me watching through the winter hiatus, and brought me back in January for the final denouement, but the more I saw, the more I hated myself for continuing to watch what I could no longer deny was simply very bad TV. Apart from the silly plotting, the special effects were incredibly cheesy (think early 1980s), the dialogue so stilted it would've rung false in the bubbles over genuine comics characters' heads, and the directing--bleah.

Of course, like every previous episode of this franchise, that finale ended with the promise of another chapter, perhaps in fall 2016, but there's no word yet on whether that will come to pass. If it does, I may be drawn in yet again, though I'll do it at times when nobody else is around to make fun of it. Because this is a program I love to hate.

That's an odd experience for me. I've always considered my tastes to be discerning, though when I look back on some of my youthful TV loves, I can't help but roll my eyes: Lost in Space. The Six Million Dollar Man. Space:1999. the original Battlestar Galactica, The Starlost. Yes, those are all science fiction shows (you're aware I'm a Star Trek fan, right?), because that's what I loved best. If circumstances had been different--if my family had lived in range of larger cities, for instance--I could add quite a few other shows to that list, some of which I saw occasional episodes of (Voyage to the Bottom of the Sea, Time Tunnel, Land of the Giants), others which I only know by virtue of the fan magazines I started reading in high school (Thunderbirds, Secret Agent). Most of these shows--the ones I saw and those I only managed to sample--would initially grab me with their coolness. The gadgetry, the scenario, the music drew me in. Over time, though, I'd be disappointed. Even Star Trek suffered from inferior scripts in its latter seasons, and it was the gold standard for televised science fiction well into the 1980s, when it was surpassed by its reincarnated self, Next Generation. By the time The Six Million Dollar Man had entered its third season, I'd given up on it, and I barely made it through the first season of Space:1999, despite its inarguably excellent production values. I'd come to realize that it took more than space battles, flashing lights, and fantastic plotlines to make a science fiction series work: without good writing, directing, and acting, there was just no point.

This is what made the original Star Trek stand out from the rest of the pack. And yes, there are episodes of the original series that are painful to watch ("Spock's Brain," anyone? Or how about "Catspaw"?), but overall, there was a commitment to quality in that series that separated it not just from the rest of televised science fiction, but from episodic TV in general. "The City on the Edge of Forever" measures up to the best episodes of the best dramas of its era.

But back to Heroes (sigh) and Heroes Reborn (ugh): why did I keep watching this dreck?

I guess, when it comes down to it, I finally have a place in my heart for hate-watching.

A few years ago, I tried watching the pilot of Lost in Space, which was, I'm embarrassed to admit, my first real TV science fiction crush. I remember watching the scary "Keeper" episodes when I was just 5 years old, covering my eyes and peeking between my fingers at the huge spider monster that was strangling Dr. Smith, fearing in a later episode that Dr. Smith would be left behind when the Jupiter II left the planet it had crashed on two seasons earlier, worrying about the status of the robot when it had its battle with Robby, and much more. I didn't discover Star Trek until it was in reruns, probably because it was on too late for my tiny self to stay up for it. Seeing that first episode as a middle-aged adult, I cringed again and again at the sheer silliness of it. I couldn't even hate-watch it: I was just embarrassed for the people who'd made it, and for my childish self for loving it so much.

Perhaps that's what Heroes and its offspring kindled for me: nostalgia for the crap TV I watched as a child, updated to the present. I've also watched every episode of Glee, a gimmick show that, like Heroes, stayed on far longer than it should have--watched them and made fun of every ludicrous twist, even though I knew the series was deep into self-referential irony long before it was finally put to rest, to the extent that I wasn't sure whose leg was being pulled when Vice President Sue Sylvester took the stage in those final moments to congratulate her mortal enemy, Will Schuester, for all the music educational good he'd done. Glee ended last March, and Heroes Reborn premiered in September, filling the bad TV void for me.

If I'm honest with myself, I have to admit that I've always had some room in my brain for bad writing, bad music, bad television. The musical snob in me enjoys an occasional dose of schlock. The literary aesthete likes to pick up a pot boiler from time to time. And yes, I've always watched some bad TV, usually because I can't let go of series that once meant something to me, but are now years past their prime: the later seasons of The Cosby Show, LA Law, ER, and many others. I do eventually give up on many of these shows--I can't remember watching the final seasons of any of those I just mentioned--but that's only after staying with them much longer than I needed to. It's also rare for me to give up on a novel, even if I'm finding it frustratingly bad. Perhaps I just don't want to admit I've wasted a significant part of my life on something that's just not very good.

For all the shame of sticking it out with bad TV, I must admit there is a perverse pleasure in watching something crash and burn. It's rubbernecking syndrome, the phenomenon that arises when a wreck on one side of a divided highway causes the other side to slow down, as well, from people checking out the damage. There's something in us that makes us want to witness a disaster. Perhaps the apocalypse of a TV show collapsing under its own weight is more real to us than the ridiculous events it depicts.

Or maybe we just can't help thinking, "That could be me."

No, I don't have millions to burn making an embarrassingly awful TV show. But I'm no stranger to the project that goes south, for all the best efforts of many gifted individuals. I've helmed a few, and been a part of more. It hurts when the dream turns sour, the audience wanders away, and the big idea refuses to take off. It hurts even more when a great idea turns into something that no one wants to claim, when the best minds available produce a pile of excrement.

So maybe--and this is just the beginning of a hypothesis--the real reason we hate-watch bad TV (or hate-read bad novels, or hate-eat junk food, or hate-do anything) is to empathize with the humans who created it, who invested time, effort, and money in something that thought would be great, only see it turn into something awful.

And also to gloat. Because sometimes it's nice to be reminded that a shit-ton of money is no guarantee of success.

Postscript: I'm writing this toward the end of my second sick-day from my mid-winter cold, with another ahead of me tomorrow. Yesterday I also hate-watched the ScyFy miniseries Childhood's End. Ugh, but that was a disappointment.
Labels: bad TV hate-watching Heroes Reborn
Location: Portland, OR 97229, USA