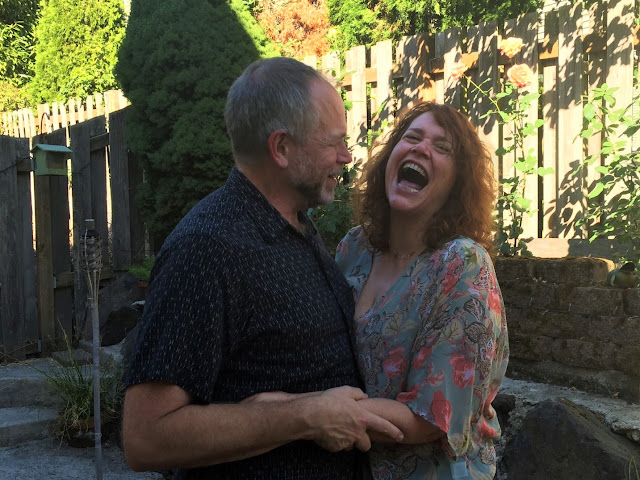 It's just a piece of paper.

That's what we've been telling ourselves for over a year--and really, what I've been telling myself for far longer than that. A marriage license is a document that only has meaning because human beings assign it that meaning. It's the same conceit that causes a more durable slip of paper to be worth whatever dollar amount we assign to it: without the tacit agreement of all the humans who are affected by the existence of this document, it would be nothing more than tinder for a campfire, recyclable material for a pulp mill, lining for a bird cage.

I went for fifteen years without having my name on a marriage license, telling myself it was just a piece of paper. Oh, there were times I longed to be part of the legally wed club, especially as I felt my parenting years slipping away from me; but mostly, I comforted myself with the knowledge that the meaning of a marriage license is an arbitrary thing, assigned to it by a culture that freights marriage with unhealthy expectations. I could also tell myself that the meaning of the marriage relationship is in a constant state of flux, trapped between the strictures of church and state, and that marriage tomorrow  may mean something utterly different from marriage yesterday. And finally, I could harken to all the happy committed couples I've known whose unmarried relationships had long outlasted either of my marriages.

And then I met Amy.

Amy and I did something together that I'd always kicked myself for not doing with any other person: we allowed our relationship to develop over time with no expectation that there would ever be a wedding. We gave ourselves time to learn about each other, to share difficulties, to struggle together, grow together, find new things to love about each other, learn how to live with each other's quirks, each other's families, each other's children. Our evolving relationship passed through stages of togetherness, some of them entered into intentionally, others just happening: separate apartments, me moving into Amy's apartment, us renting a house together, buying that house together. Some of our milestones were simple matters of administrative necessity, as when my return to teaching after two years of layoff made it possible for both of us to have health insurance--but only if we signed an affidavit of domestic partnership.

Six years into this mutual experiment, we decided it was time to say some words, and start calling each other husband and wife. We still weren't ready to sign a paper, but we figured that, for all other intents and purposes, we might as well be married. With a few friends and three of our four children, we hiked to a spot on the Leif Erickson Drive (a popular trail in Forest Park), and with one of those friends presiding, vowed to be together for life, put rings on each other's fingers, and stomped on a light bulb. We had a lovely honeymoon on Orcas Island, and returned to the house for which we had just co-signed a mortgage to begin married life.

In most ways, married life was no different from "shacked up" life: at the end of each work day, we'd come together to commiserate about celebrations and frustrations. We laughed about and fretted over our children's lives, worked out, shared meals, went on vacations, bought groceries, kept house, hugged and kissed--and yet it really did mean something that we'd made promises. A year after that event, we climbed a mountain together, sealing the deal once more with a summit kiss.

So why not record our relationship at the county courthouse?

It seemed we'd run out of reasons not to legally marry. The last barrier was habit: we'd spent so many years deriding the institution of marriage, airing our bitterness for how badly it had treated us before, insisting that the piece of paper was just an arbitrary formality with no real meaning.

An arbitrary formality that had been, until May, exclusive to heterosexual couples.

Seeing the celebrations as gay couples married, knowing many of those couples myself--I'm thinking in particular of two 70ish men I know who just tied the knot last year--I saw how important this was to them, that it was a distinction worth fighting for, that rights I had long taken for granted as a not-legally-married heterosexual common law spouse could only be claimed by these couples if they had that piece of paper, and my hardened heart thawed.

That was the biggie for me. I know Amy had some reasons of her own; and as a couple, there was just a sense of rightness to it. We'd lamented those younger, harsher marriages long enough. It was time for us to do it well.

But we'd already said the words--and in truth, August 2 will always be our real anniversary. Not wanting to devalue that special day, we kept October 4, our signing day, extremely small, inviting a few friends and family members, asking a dear clergy friend to "officiate" over the signing of the papers. The legal documents are nothing much to look at. I've inked plenty of them myself, as an officiant. The prettier one, the one we keep, has no legal value at all. The plain document is now filed away somewhere in the Washington County courthouse, and for a small fee, we can get a copy of it.

And as for the marriage? Mostly it's felt no different. And yet, in the twelve days since we signed the papers, I've often caught myself with a silly smile on my face, my subconscious telling me, "Oh, yeah--we're really married." It's still sinking in.

Just between you and me: I really like it.
gay marriage marriage mountain marriage
Location: 6420 NW Starflower Dr, Portland, OR 97229, USA