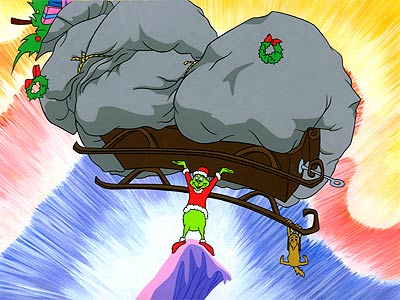 And what happened, then? Well, in Whoville they say - that the Grinch's small heart grew three sizes that day. And then - the true meaning of Christmas came through, and the Grinch found the strength of *ten* Grinches, plus two!

I've been such a Grinch.

The original purpose of this blog was to provide me with a platform for venting. Since leaving the ministry in January 2000, I'd been without a pulpit. After more than a decade of being able to say my piece in front of a captive audience at least weekly, I was now reduced to guest preaching, no more than monthly at first, eventually tapering off to not at all. I wrote occasional essays, submitted some for publication, and even made it onto the Oregonian's op ed page twice (though the second one was only in their online edition). Even when I was guest preaching, I was doing my best to behave, tempering everything I had to say to keep it from shocking my listeners. So when, after thirteen years of bottling it all up, I started blogging, it was more than just floodgates opening: it was the Hoover Dam blowing up. The rush of opinions could not be arrested.

I commented on everything that bugged me: politics, economics, work, play, music, TV and, most of all, church. I wrote  pieces on every aspect of theology I'd ever wanted to rant about, everything that was wrong with church polity, everything that sucked about being a minister, and I just kept going and going, long after even the most dedicated followers had gone back to Facebook or Twitter after realizing yet another piece was Too Long, Didn't Read. In some cases, I extended the length to multiple posts, writing enough to fill a book on some topics.

Going back to my earliest days of ministry, I had found much about the popular celebration of Christmas to grumble about, to the extent that in just my second year of preaching I adopted Dr. Seuss's How the Grinch Stole Christmas as an apocryphal part of my own scriptural canon. Every complaint the Grinch had about Christmas resonated with me: the commercialism, the glitz, the gluttony, and above all, the noise, noise, noise, NOISE of it all. It wasn't that I hated the holiday itself; in fact, I had many warm memories of Christmas as a child, though they were often tinged with the stress of living in a parsonage as my minister father and organist mother stressed out over doing their jobs both at church and at home, not to mention the "is this all their is?" disillusionment so many middle class children experienced once all the beauty of the living room has been turned into a wrapping paper recycling project. Looking back, though, my fondest memories of the holiday are associated with quiet Christmas Eve services, the sanctuary lighting muted or extinguished to emphasize the wonder of a flickering candle bringing illumination to the world in the midst of darkness. At the heart of Christmas is a story of extreme poverty, a homeless unwed mother giving birth in a barn in a country under occupation by a brutal empire. That's the nugget buried beneath the glitz.

For most of my life, I railed against the glitz, trying to defend that precious little miracle from the annual capitalist bombardment. The irony of exploiting this story of poverty to save not souls but profit margins infuriated me, even as, to some extent, I swallowed it, trying to reproduce the secular warmth of my childhood memories for my own children. We had to have a well-decorated--though not too tall!--tree, stockings, some kind of cinnamon pastry for breakfast, Christmas music playing on the stereo, and most of all, a mountain of wrapped presents under the tree. Divorce only made this worst, as now I realized my children were being subjected to two gift orgies, and with neither of their parents willing to give up the experience, that they were happening on the same day. When I preached against Christmas, it was often coming out of the awareness of my own hypocrisy: I wanted all the world to swear off what I couldn't keep myself from doing.

Over time, those gift gluts faded, and as my ex-wife and I matured, we were able to give up having to see our kids on Christmas Day and forcing them to leave whatever celebration they'd been enjoying--including most of the gifts they'd just received there--midstream to go and start a new one in their other home. Now they could wait until a later day to change locations. As the children themselves matured, and especially after they became separated from me by 700 miles, the giving of gifts became much saner: when they were with me over the holidays, I gave them presents on the day; when not, I ordered things from Amazon that could be delivered to their mother's house sometime in December.

Meanwhile, my connection with church became more and more tenuous, to the extent that I no longer had a church home at all. I still had church music work, though, which kept me out on Christmas Eve, directing choirs and playing pianos, until finally last year a full-time teaching position enabled me to leave even that behind. That's why, a year ago, I devoted so many words to my almost-lifelong problems with Christmas: it was safe--no fears of turning off parishioners--and I had the time.

As December approached this year, I was fully prepared to click right back into Grinch mode, grumbling about all those frustrating years of trying to defend the baby from the bathwater, but with an added sour point of knowing I'd already said everything I could possibly have to say about hating the whole Christmas season. That didn't stop me from going out and getting a tree last Sunday, but the following day, as I came back to school, I was dreading three weeks of teaching Christmas songs. Except then something unexpected happened.

Maybe it's not having to teach in a gym. Maybe it's knowing these children much better. Maybe it's just an opening in my heart that's been underway for some time now. Whatever it was, I experienced my own Christmas miracle this week.

I started each Kindergarten through Third Grade music class with a "brain dance" to the Manhattan Transfer's version of "Santa Claus Is Coming to Town," always a kid-pleaser. Then we sat down in a circle, and I played the chorus of "Jingle Bells" on a xylophone. Every class of children jumped in, happily singing the song, anticipating the moment when I would pass out sleigh bells for them to play as they sang. But before I did, I asked them what the song was about: "Santa!" "Reindeer!" "Christmas!" I heard this in every class from children of every ethnic background: Russian, Ethiopian, Somali, Arab, Mexican, Polynesian, Chinese, Vietnamese, and yes, from that smattering of African-American and white American children in each class, as well. I set them all straight, much to their befuddlement and then amusement, pointing out it wasn't a one-reindeer open sleigh, that the bells were mounted on the horse's harness so they could ring with every step (the song is an excellent way of demonstrating the difference between keeping a steady beat and playing the rhythm of a melody), that Santa and Christmas never appear in it at all, and so on--and even with all that misinformation dispelled, they loved the song. They loved moving to "Santa Claus Is Coming to Town," too. They loved ringing the sleigh bells. They loved telling me what songs they want me to teach them in the days leading up to winter break. I found myself awash in love, joy, excitement, and this from children who, in many cases, view school as a refuge from their chaotic home lives.

For a child living in poverty, winter break can actually be a time of great stress. Whichever parent they are staying with probably has to work through the holidays, meaning the child may be left home, unsupervised, for extended periods of time. If there are two adults at home, they are likely to be under more stress from the daily presence of children than when school is in session. We teachers mean a lot to these children, as well, and they miss us when they don't see us every day. Finally, it's anyone's guess what gifts, if any, they'll be receiving. Christmas for many of these children is going to look like Whoville after the Grinch left with his overstuffed sleigh crammed with all the gifts and goodies. I need to add, as well, that many of my students probably don't celebrate Christmas as all, because they're not Christians.

And even so, they all love it.

The enthusiasm is palpable, and seeing it, hearing it, I find my own heart growing. My little Whos have taught me, after all those years of pontificating on the sociology, anthropology, ecclesiology, and theology of Christmas, what it really is all about: a poor family making the best of a difficult situation to bring light into a darkened world. There is so much light in these children's faces. How can I begrudge them their joy?

So in the two weeks ahead, I will be teaching them almost every song they want to learn. (No to "Let It Go" and "Baby It's Cold Outside," but everything else is a go.) We'll wring sleigh bells some more, crack a whip, laugh like Santa, sing about Rudolph, Frosty, and of course that Jolly Old Elf. We'll have a lovely time without packages, boxes, or bags because, as the Grinch learned, Christmas comes without anything of these things. It comes just the same. Christmas day is in our grasp, as long as we have hands to clasp.

Huh. The lights on my tree have little halos. Must be the mistiness in my eyes as my heart melts.