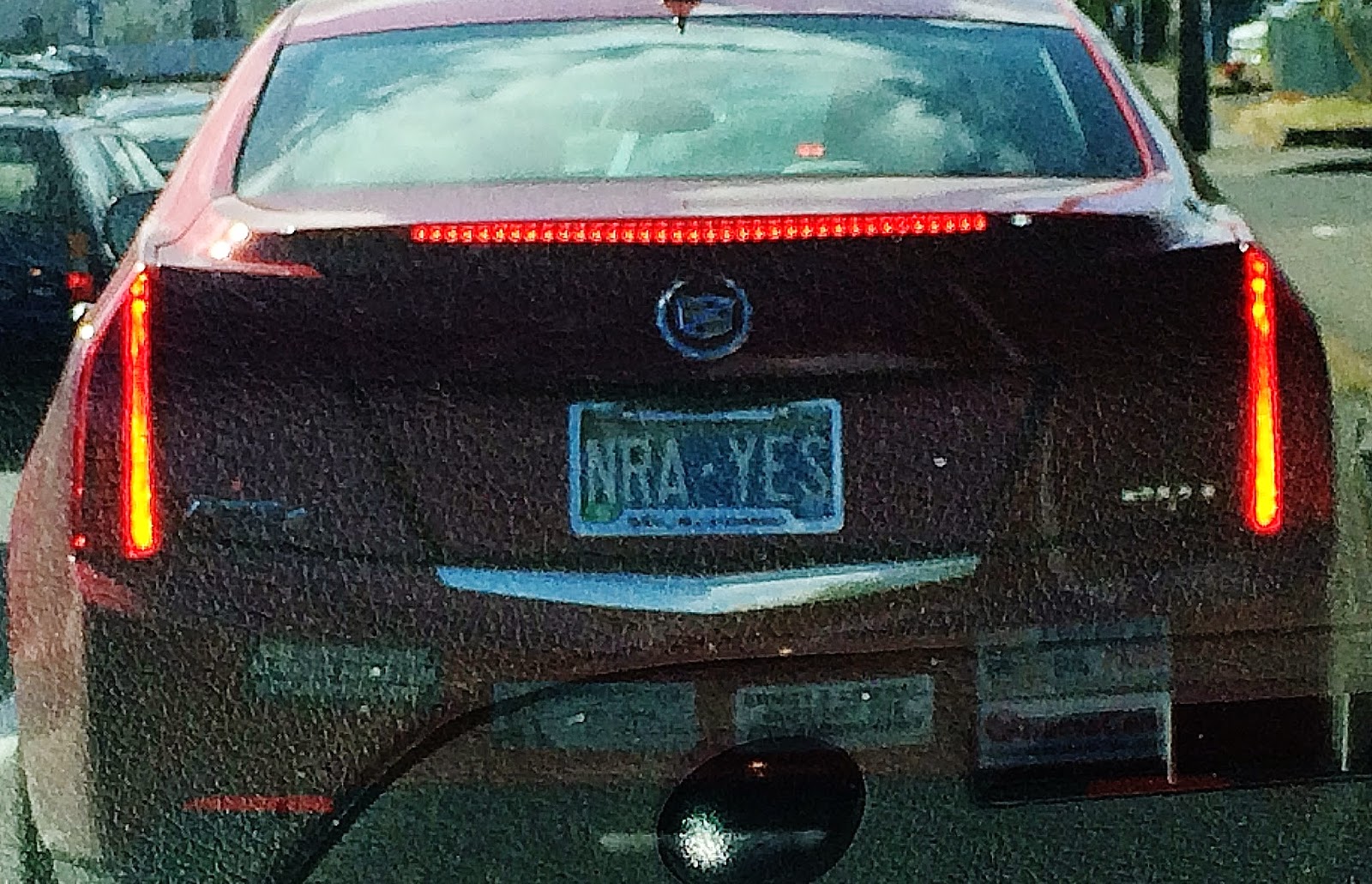 I really don't want to have a conversation with this guy.

On my way home yesterday, I found myself behind a Cadillac with a vanity plate that nearly took my breath away: "NRA YES." It was accompanied by a half dozen right-wing bumper stickers espousing the standard NRA talking points--I think one of them said "The only thing that stops a bad guy with a gun is a good guy with a gun," and there was one about the Second Amendment, one about blaming Democrats for Obamacare (ludicrous, because it was concessions to Republicans that made the damn thing so complicated, rather than a clean, efficient Medicare for all)--and I was so struck by what I was seeing that, when we came to a stop light, I snapped a picture with my phone. I did this as surreptitiously as I could for reasons I'm about to go into, and the result is that only the license plate is legible in the photo, but that in itself tells the story quite well.

That license plate and those stickers told me this is a person I do not want to get in a conversation with. The comprehensive message they conveyed made me nervous about taking that picture: what if the driver saw me doing it in his rear view mirror, and wanted to confront me about invading his privacy by photographing his publicly displayed political views? There was no confrontation, I'm relieved to report--another car came between us while we were still a mile from the interstate, and by the time I took the onramp, there was no sign of the NRA YES Caddy.

Portland has no shortage of activists, so anytime one gets in traffic, one is likely to see a plethora of primarily left-wing sentiments expressed in simplistic terms by strips of colorful plastic adhered to the back sides of cars. I've done it myself, though not often. If I really believe in a cause, and find one that states my support non-jingoistically, I will occasionally put it on my car, but the last one I had was an Obama sticker in 2008, and it came off as soon as the election was over.

My reasoning is this: there is no room on a sticker for nuance. Stickers state opinions in a dozen words, try (and usually fail) to be pithy about it, and mostly elicit appropriately simplistic reactions: nods or scowls. I rarely see one that amuses me, see many that cause me to roll my eyes, and from time to time, I see stickers that infuriate me. This driver's opinions, the sticker tells me, are so wrong-headed that someone needs to stick a finger in his face while shouting down all his stupid talking points.

The irony of this reaction is that it's precisely the manner of argument advocated by the offensive sticker. I don't want to reason with you, bumper stickers tell me, because you're just plain wrong. And since that's the problem with the sticker itself, there's nowhere to go but shouting.

Shortly after I started writing this blog, I put up an essay about the church's two thousand year crusade against Judaism. One of my readers took issue with it, and began posting lengthy diatribes that, rather than engage my arguments, quoted long passages from the Bible "proving" that anti-Judaism is scripturally justified. He wasn't interested in a real dialogue: he took whatever replies I posted as fuel for his fire, ignoring my points and just unleashing another tirade of right-wing Christian propaganda. I finally unfriended him on Facebook.

This blog has never been about arguing points. Yes, I occasionally use it to channel my inner curmudgeon, posting rants about things that just don't make sense. But I really don't like to argue. As much as I love watching Bill Maher's Real Time news panel, I tune it out when the arguing starts. People raising their voices, shouting over each other so no one can be heard, refusing to listen to any salient points--it makes no sense to me.

Bumper stickers are like that: hitting everyone who reads them over the head with a club of irrationality. Even if they're making a good point, they're doing it in a way that tells me the driver of this car cares not one whit for anything that might take the wind out of his inflammatory sails. "God wrote it, I believe it, that settles it."

Back to the NRA YES plate: at least bumper stickers come off. Driving around town with a vanity plate proclaiming your support of an organization that goes out of its way to promote the rights of irresponsible parents to leave loaded weapons lying around so their toddlers can die horribly tells me here's a person who might as well not have any ears to hear what I have to say.

It was probably foolish of me to take that picture. It may even be risky to write about it in this space (though considering my last post had a grand total of 9 views, I'm not too worried about this guy hunting me down). Maybe what I need is a bumper sticker that says something like "My progressive public-school-attending child would like very much to reason with you about the complexities of the issues you're espousing, and encourage you to open yourself to the possibility that there may be other valid opinions on the topic."

On the other hand, that'd probably get me beaten up. Better to abstain.
bumper sticker nuance right wing vanity plate
Location: Portland, OR 97229, USA