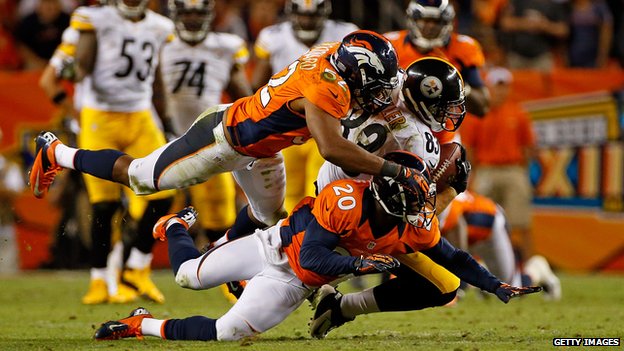 Good God, make it stop! And why can't I tear my eyes away?

I've written about this before, and I encourage you to peruse that post (as well as this one, which suggests the human tendency to turn even safety equipment into weapons if it will create an advantage in a competition is what occasioned the Flood). The elegant game of baseball aside, football really is America's sport. No other sport merges bone-crushing violence with arcane bureaucratic rule manipulation as elegantly and telegenically as American football.

These two components--violence and creative rule avoidance--are the most American of vices. The US tax code is as voluminous as it is because every Congressional addition to it, whether its purpose is to plug a loophole or streamline a provision, provokes an equal and opposite reaction from tax accountants and the capitalists who hire them to find even more convoluted ways to shelter their income from the IRS. Lest you think I only have it in for corporate amorality, remember that my biggest beef with United Methodism is the controversy-shy episcopacy that looks the other way while gay and gay-friendly ministers create work-arounds to church policies forbidding gay ordination and gay marriage ceremonies. Rather than bravely defy unjust rules, bishops and superintendents parse language to create loopholes of their own, contort themselves to squeeze through them.

As for violence, just take a look at how our Peace Nobelist President has prosecuted the Drone Wars, now escalating them to include airplanes with live pilots as he bombs ISIS. Nearly every bump he's had in the polls throughout his benighted tenure has been related in some way to aiming and launching bullets, bombs, and missiles at the terrorists who stand in the way of American interests abroad.

Football captures both these vices and puts them in a stadium, under bright lights, photographed from multiple angles by high definition cameras that can then replay every hike, pass, punt, sack, tackle, reception, fumble, victory dance, all the glory, all the disappointment, and, yes, all the injuries. We see the bones break, watch the helmets bounce off each other, feel the hush as coaches and medics gather around a fallen warrior, but also the thrill of the brilliantly executed strategy. We also glance at our watches as referees try to figure out which subclause of the football code applies to a particular situation, roll our eyes as we realize a game will be decided not by athletic prowess but by clever exploitation of the time out rule, and feel deeply satisfied by the entire pageant because nothing could be more American than this.

We love this game, love it so deeply in our bones that we send our sons out onto fields when they are barely big enough to carry all the armor required, consider it a rite of passage that, if skipped (as happened in my case; no way would my parents approve of me playing tackle football), will result in a man who is somehow less than fully American, lacking the aggression, the stamina, the tolerance for pain essential to a full citizen of our warrior nation.

For two years, I sat in the stands at Banks High School, leading the pep band, cheering the team through win upon win, but also cringing at hits, tackles, sacks, dog piles that made me wonder how the mothers of those boys felt, knowing there would be bruises, sprains, perhaps even fractures to tend to that night.

I'm going on about this because there has been an outpouring of speculation about the connection between the qualities essential to playing football successfully and the recent spate of incidents of domestic violence involving NFL players. We're finding out that some of these star athletes have been beating their girlfriends, wives, and children, and in at least one case, ratcheting the violence up to a murder/suicide. These comes on the tails of the concussion controversy, as it has become clear that the wearing of helmets has, rather than protecting players' brains, led them to engage in even more dangerous behavior, using those very helmets as battering rams. Hit one's head enough times, and long-term damage is inevitable.

I'm not willing to draw conclusions on causality here. As I wrote recently, corporal punishment is another practice that typifies citizens of the United States to a far greater extent than many other first world nations. With so much domestic violence going on all around us, it's inevitable some high-profile athletes would be part of the problem. I've seen no statistics comparing the incidence of abuse in NFL households to American households in general, so I'm refraining from making that connection.

What cannot be escaped, though, is that whether football players are any more or less abusive at home than typical Americans, on the field they are mandated to hit their opponents hard and often, to drag them to the ground and throw their full weight upon them, as no other major league athletes do. The game as it has come to be played in 2014 requires this. Players who exercise restraint on the field will very quickly find themselves benched and, ultimately, released from their contracts. One cannot expect to survive a gunfight with a pocketknife; or a game of tackle football with touch football tactics.

Most of my own football watching happens in small doses at bars where Amy and I shoot pool. We're there to play a game of precision that involves intuiting vectors. When it's Amy's turn, I frequently find myself distracted by the action on the big screen TVs as bodies come together with a crunch, struggling over possession of a misshapen ball, then retreat from each other as officials and coaches debate what just happened. There's a snap, an arm pulls back, searching for a target, and then, whether or not the ball is launched on time, bodies fly through the air, men tumble to the ground, piling on top of each other. I want to turn away, want to shield my eyes from the mayhem, but deep within me there is a hope that the pass will somehow be completed, that the receiver will pick it from the air then sprint down the field, somehow dodging all the defenders' bodies lunging at him, finally arriving in the end zone, miraculously unscathed. I say "miraculous" because few touchdowns are achieved without some casualties. So I keep watching, riveted to the action, until it is my turn to take out my own aggression on a far smaller, safer scale, hopefully sinking a ball in a pocket, perhaps another after that, until Amy again takes her turn, and my eyes are drawn back into the blood sport I simultaneously decry and celebrate.