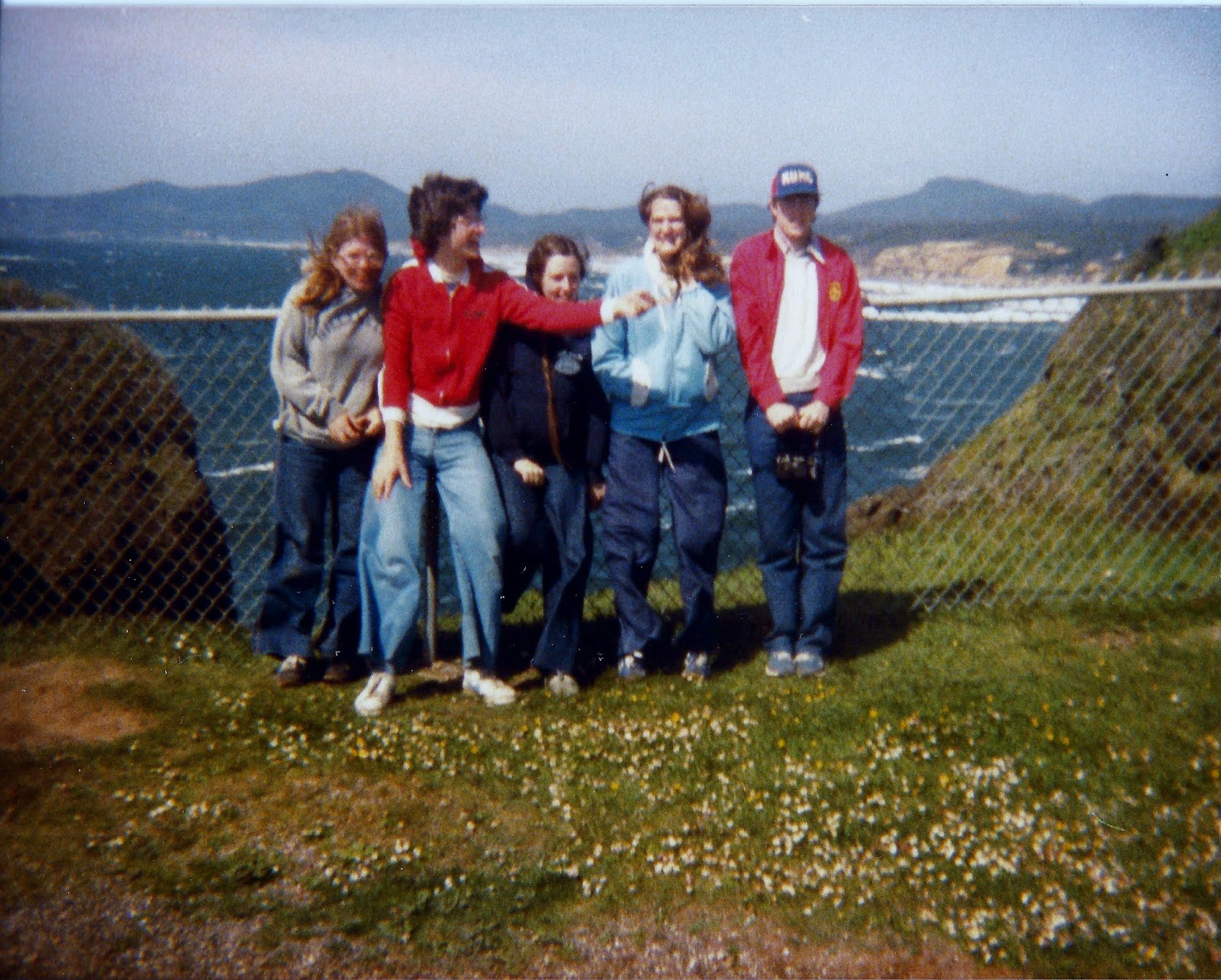 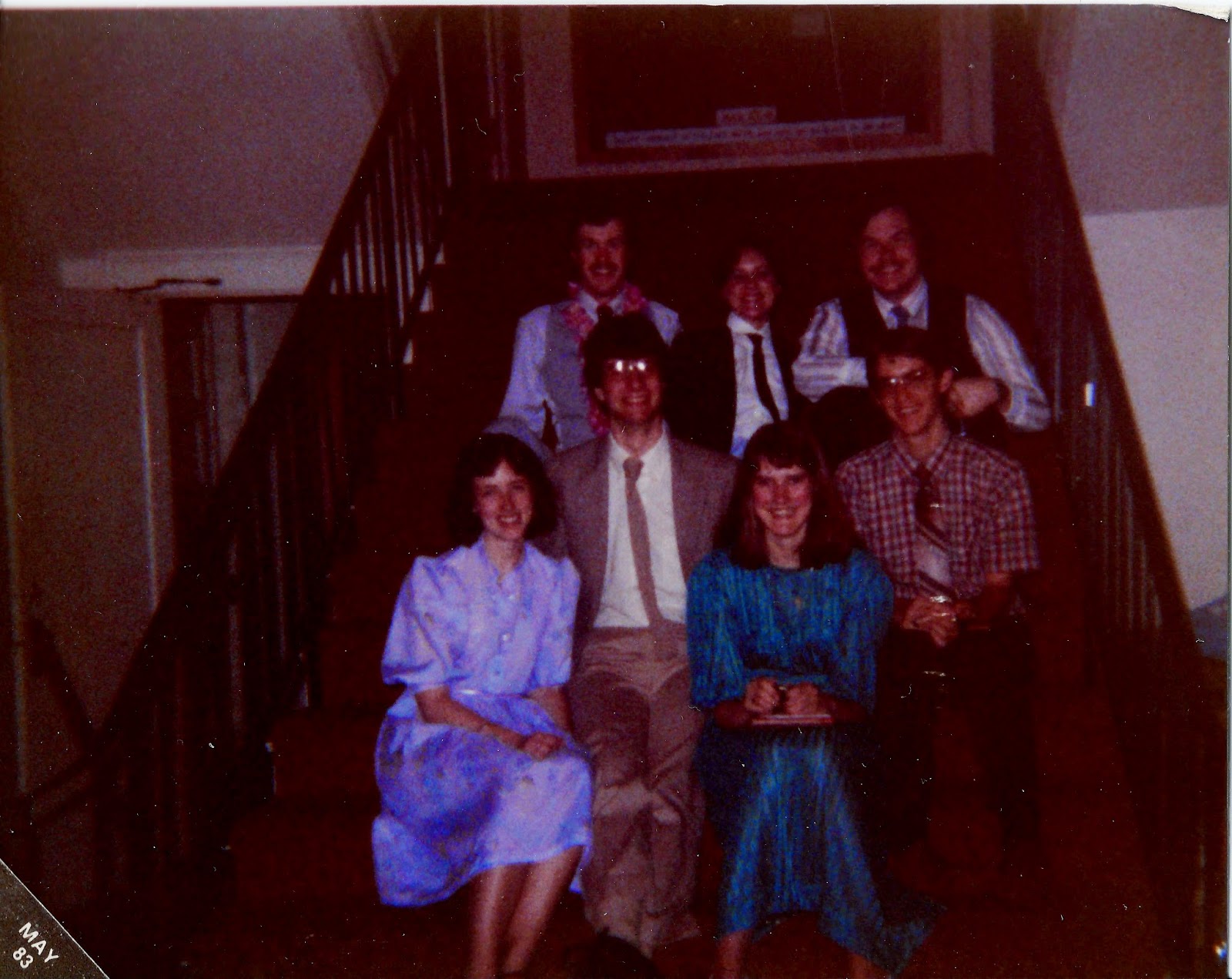 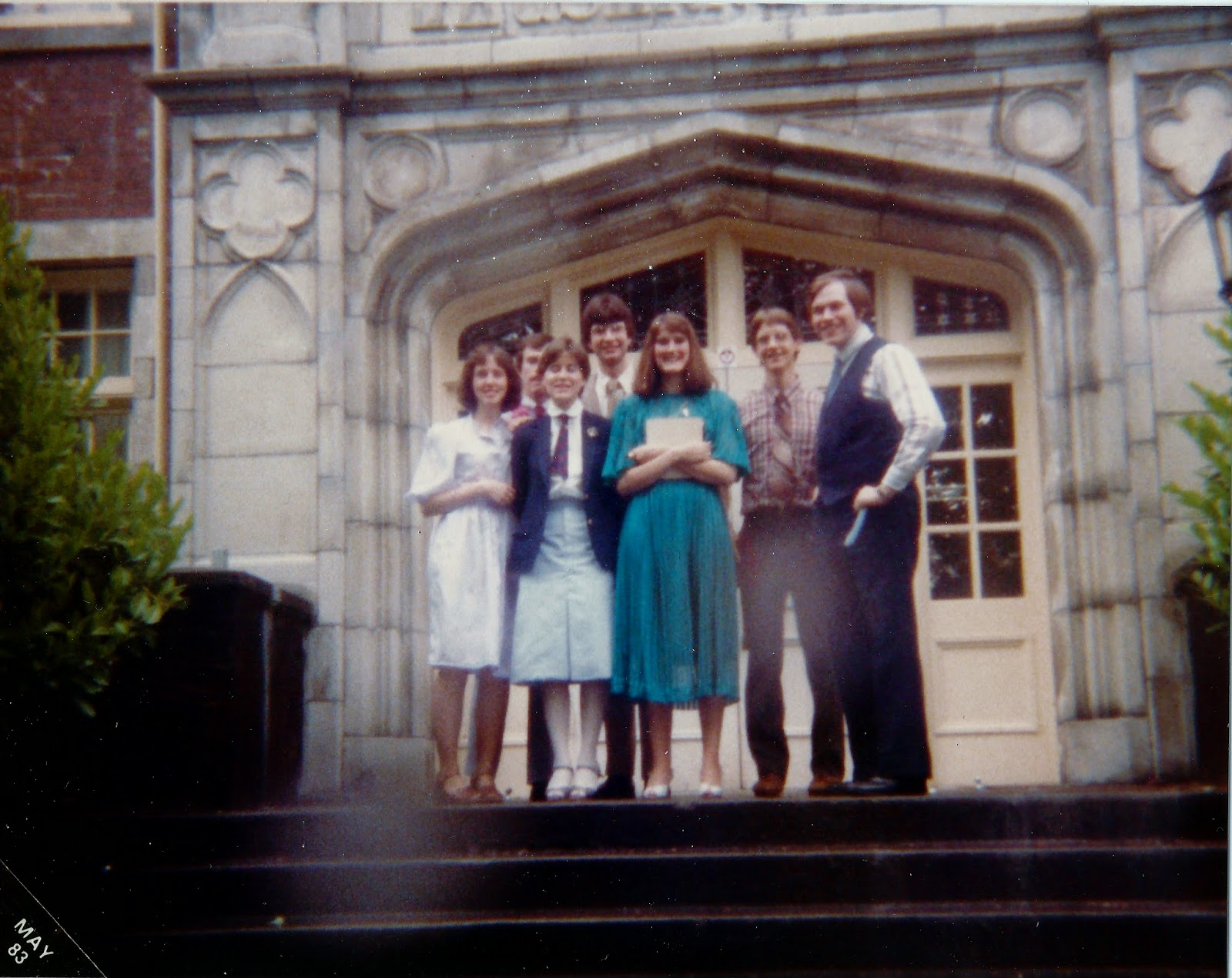 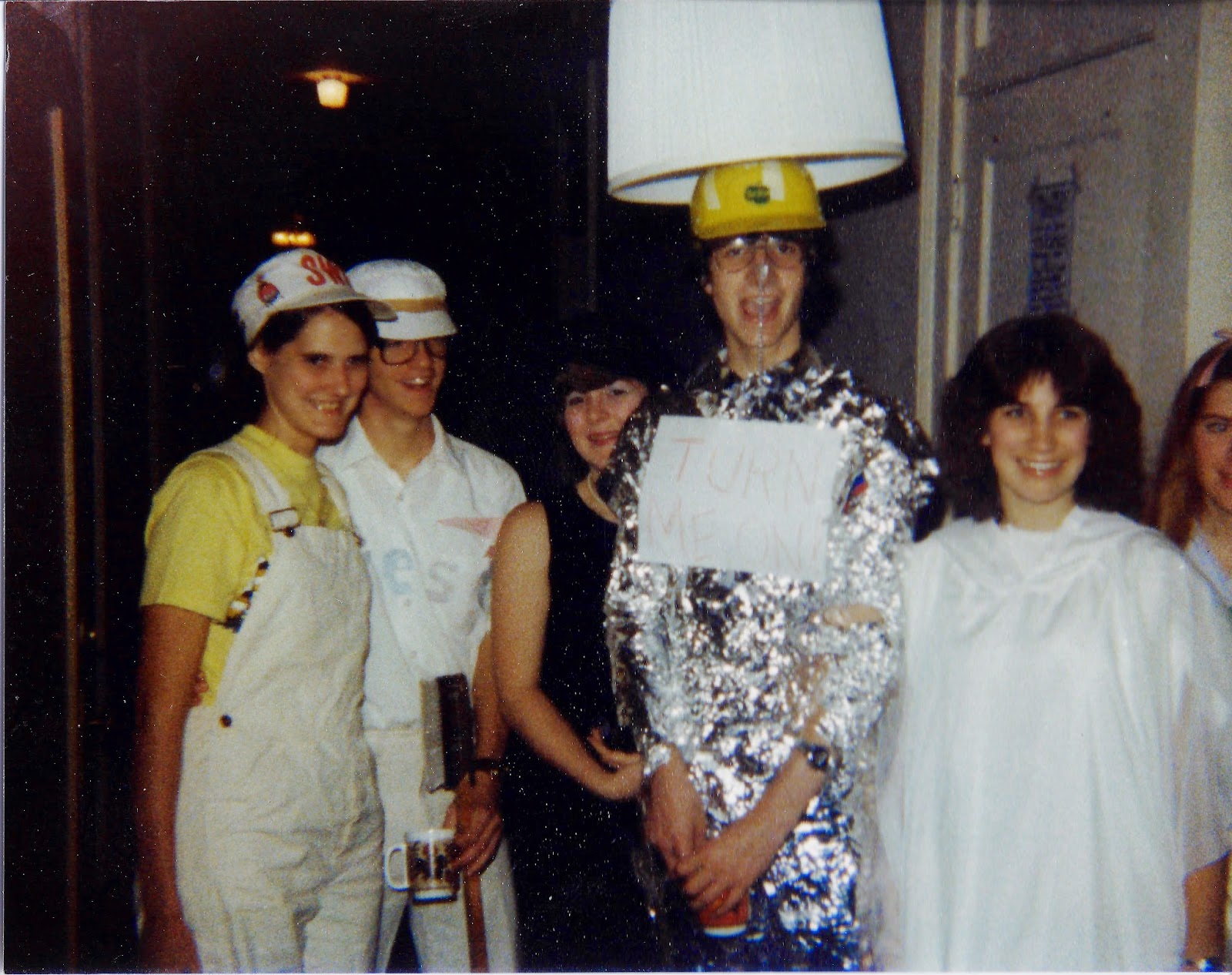 One of these people is gay. I had no idea.

Correction time: I said in my last post that I didn't really befriend a gay person until I was in my 30s, and serving a gay-friendly Reconciling Congregation. That was only partly true. In fact, I did have a close gay friend, but I was completely ignorant of his orientation. In fact, I only learned he was gay at our 25th college reunion, in 2008.

It's not that strange that I didn't know this about him when we were classmates, living in the same dorm, part of a clique we called The Group. Scott dated women, belonged to a fraternity, and was, the last time I saw him before that reunion, engaged to a woman. Then he moved to North Carolina, and I heard nothing from him for about fifteen years. Then came the reunion. We met at an alumni mixer at which we only knew each other, got out of it as quickly as we could, and went out for a beer. There, Scott just mentioned in the conversation that he had a partner, and called his partner "him." It's not that he came out to me in the traditional sense of the term; he just said it as if I'd always known.

Of course, I hadn't, and Scott knew I hadn't, at least not up through the early 1990s; but coming out in this casual way, the same sort of way most straight people come out as heterosexual ("I was just talking to my wife about that...") told me he was completely cool with this now, took it for granted that this essential part of his identity was as normal a thing to share as his job, and that he trusted me to be fine with it. I was touched and humbled that he thought that of me, at least in part because, as I wrote in my last post, I was an utter ignoramus about the topic at the time we knew each other best, and saw each other every day. It wasn't just that I didn't know Scott was gay; I hardly knew gay people existed. And Scott was actively hiding it then, though in retrospect, knowing it makes perfect sense to me.

I'd like to think that what led Scott to trust me with this information 25 years later was my empathy. I can be completely clueless about what another person is feeling--part of that mild autism I wrote about several months ago--but once I do know, it's impossible for me to be judgmental. I've always been this way. It's the part of being a pastor that came easily to me, though expressing it was another matter. It's why it was so easy for me to discard homophobia. As soon as I get to know people, they cease to be abstractions.

A former colleague who posts regularly on Facebook shared a string yesterday about the growing sense in United Methodism that there will be a schism over homosexuality. I browsed the conversation for about a minute, and stopped at the point at which I started feeling like throwing my phone across the room. It was all there, everything I was so glad to leave behind when I stopped being a pastor, then further distanced myself from church life in general: people on soapboxes, insisting that treating an entire class of people like perverts who should be locked up until they repent of their repulsive fixation was God's Truth, and that if United Methodism takes any steps at all that might suggest it's all right to be gay, the church will consign itself to the ash heap of history. Reading just a few of these tirades, I couldn't help thinking: here's someone who's never gotten to know a gay person.

Notice I didn't say that these people don't know anyone who's gay. That's highly unlikely. They probably know several. But they don't know they're gay. Why? Because it's not safe for them to be out in their presence. Given the fact that most of these ordained homophobes are pastors, coming out to them could mean, in the case of colleagues, coming under the scrutiny of the Board of Ordained Ministry, a church trial, and being defrocked. In the case of parishioners--or more likely, parishioners' children--there may be the sense that sharing this information will lead to being shunned by the congregation. If your pastor is openly hostile to your orientation, and the congregation seems to be fine with that hostility, you don't go around blabbing about your gay love life. In fact, you're probably not even out with your family, who likely share that hostility, for fear you'll be rejected by them.

This is the tragedy of homosexuality: that a profound aspect of a person's identity can cause that person to be rejected by family, friends, society in general. It is becoming less so in many parts of the United States, but even in Portland, Oregon, a male friend of mine was recently yelled out for embracing another man on the street. Granted, the person calling out the epithet was riding a bicycle rather than a pickup truck, but still, homophobia is everywhere.

To live one's entire life under the shadow of rejection, knowing that openly expressing affection to one's partner outside of the confines of the circle of one's most trusted friends is to court hostility, abuse, even violence, is tragic indeed. It astounds me that anyone, least of all helping professionals whose job it is to empathize with and reach out to the marginalized, could not see the suffering their hatred inflicts and be moved by it, work to rid themselves of it, make amends to the people they have hurt, actively defend the policies that drive these people from faith communities that could be healing them of all the fear and pain they have endured throughout their lives.

I used to argue this case with these people, citing this passage when I did:

Then [the Son of Man] will say to those at his left hand, ‘You that are accursed, depart from me into the eternal fire prepared for the devil and his angels; for I was hungry and you gave me no food, I was thirsty and you gave me nothing to drink, I was a stranger and you did not welcome me, naked and you did not give me clothing, sick and in prison and you did not visit me.’ Then they also will answer, ‘Lord, when was it that we saw you hungry or thirsty or a stranger or naked or sick or in prison, and did not take care of you?’ Then he will answer them, ‘Truly I tell you, just as you did not do it to one of the least of these, you did not do it to me.’ And these will go away into eternal punishment... (Matthew 25:41-46)

I eventually abandoned the futile quest to get people to take the Bible seriously, rather than using it as an excuse for their bigotry, because there's no convincing them. I don't talk to those people anymore.

I can't help thinking, though, that eventually they'll come around. As Mark Joseph Stern puts it in Slate magazine's "Outward" blog, "humans as a species are hardwired for empathy." To know a person in any depth is to share that persons feelings: joy, sadness, fear, grief, anger. Take the time getting to know someone who's gay and you will be inoculated against homophobia. It may take some time, but not as much as you might think.

Or, better still, just go around assuming that everyone you meet is worthy of treating decently. In the description of the Last Judgment I cited above, Jesus makes it clear that no one being judged, whether righteous or condemned, reached out or failed to reach out to the marginalized out of knowledge that it had eternal importance. They just did it, or failed to do it.

I'd like to think that Scott chose to trust me 25 years later because the college me, even in my ignorance, was empathetic enough to treat people decently. And I hope the haters who are driving United Methodism down the highway to irrelevance can learn this lesson before it is too late, and they, like all the racists, sexists, ageists, classists, and every other kind of -ists before them, wind up on the ash heap of history.