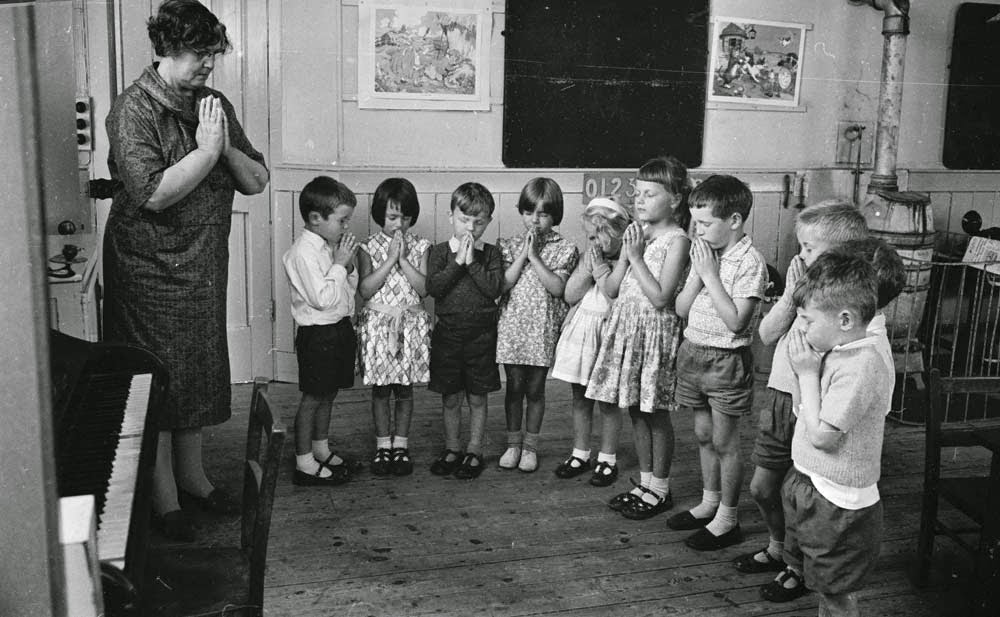 The setup: the small town of Greece, New York, has for many years opened its council meetings with prayers led by local clergy. Clergy invited to lead prayers were selected from a list of local religious institutions, so there was considerable variety in the content of prayers--up to a point. The list, you see, contained only Christian faith communities. For ten years, every single invocation was Christian. This led to complaints by a Jew and an atheist attending a meeting. The council responded by looking farther afield and intentionally inviting clergy who were Wiccan, Baha'i, and Muslim, but by now it was too late: the situation became a court case, which was ultimately settled last week by the Supreme Court--in favor of the town of Greece. It is now Constitutional, according to this 5-4 decision, to open any public gathering at which attendance is not mandatory with not just a prayer, but an explicitly sectarian prayer. Further, it is Constitutional if the people leading those prayers all come from a single faith tradition. So shut up, you minority whiners. If you don't like it, step outside until it's over.

Considering the response of the town council in Greece, New York, I don't believe it was ever the intention of the council to be exclusive. If it had been, they certainly wouldn't have attempted to repair the damage by inviting clergy from three traditions considered heretical, pagan, cultish, even Satanic by conservative evangelicals. That there were ten years of exclusively Christian invocations was an oversight, an inadvertent blunder, an accident brought on by majoritarian blinders. Sectarianism is like racism: none of us wants to believe he or she could be a bigot. Just ask soon-to-be-ex-owner of the LA Clippers Donald Sterling.

The sad truth is that most racism, classism, ageism, sectarianism, insert-your-status-here-ism is inadvertent. The number of people who set out to intentionally offend others is far smaller than those who are offended believe; and those who genuinely mean to harm or even fewer. Most acts of discrimination come about through the ignorance of well-meaning people who, being part of the majority, just don't stop to think what it must be like to be, say, a Jew attending meeting after meeting that begins with the invoking of Jesus' name.

Case in point: in 2003, I took my son Sean to Scout Camp for the first time. His troop, a business-sponsored unit in Sherwood, Oregon, had selected Camp Morrison, located in the northern Rocky Mountains just outside McCall, Idaho. The site was spectacular, the program staff were top-notch, and the boys had a plethora of activities running the gamut from crafts to fishing to rock climbing to whatever other Scout skill you can imagine. I only had two complaints. Unfortunately, over the course of the week, they became significant.

The first had to do with diet. I don't eat mammals. It's not a religious thing: my reasons have to do with health (my family has a history of heart disease), justice (raising animals for slaughter uses far more resources to feed far fewer people than raising grain and produce), environmentalism (grazing and waste make a large contribution to climate change) and personal taste (I just don't like the flavor and texture of red meat). Be all of that as it may: the registration form for Camp Morrison asked about dietary restrictions. I spelled mine out. Every time beef was on the menu, I was directed to the sandwich table, where my alternative entree was a PBJ.

Apart from my frustration with feeling like a Second Class Scout at every meal, I was aware our Sherwood troop had some Hindu members, though neither had come with us to this camp. If they had, they would've been in the same boat. I'd also voiced this concern at a leader training earlier in the year at which the protein for a meal we were taught to prepare was ground beef, and the presenter had no answer to a question about menus that would be inclusive of boys with dietary restrictions.

My second complaint at Camp Morrison was saying grace before meals. As a former clergyperson, I had coached our troop chaplains on how to say non-sectarian prayers. It was clear to me whenever we gathered at the dining hall that the other units, almost all of them Mormon-sponsored, had not taken any pains to train their boys in this way. The assumption in a Mormon troop is that all Scouts in that troop are Mormon, and it's a well-founded assumption. To assume that every boy attending an Idaho camp is Mormon, or at least Christian, is not that much of a leap. Of all the troops in attendance at this camp--and there may have been as many as 28--I was only aware of one other that was not sponsored by a Mormon church, so the boys saying the prayers, and even the adults coaching them, could be excused for not stopping to think there might be non-Christians, even atheists, attending the camp.

Just to be clear, I really don't think anyone was setting out to offend the small minority of Scouts and adult leaders who were not members of the majority religion at this camp. Mormons I've known have gone out of their way to be inclusive of other faith traditions, to the extent they're aware that they exist. Spend enough time in a monochromatic culture like Idaho, and it's not surprising one might assume everyone wearing the uniform of a Scout is, like you, a beef-eating Mormon.

The problem is that we're not all like that. It's common to put down Portland as a very white city, and much of it is, but the neighborhoods where I teach have plenty of color, both of complexion and culture. One might not know this in Irvington or Lake Oswego, but as a metropolitan area, Portland has got plenty of diversity. Portland is also a predominantly secular community, with religious minorities clearly in the minority. No one elected to the city council would last long assuming that any one faith or ethnicity could speak comprehensively for all the others.

That's not true of small towns, though. And it's small towns that are the battlegrounds in this religious war our nation is fighting. Should evangelical business owners have to wait on gay patrons? Should they have to serve them in their restaurants, bake cakes for their weddings, rent apartments to them? Should graduation committees consider the rights of the two Jews, one Muslim, and three atheists in the graduating class when they decide whether to ask an evangelical minister to deliver the invocation--or whether to even have an invocation? These are questions for small monocultures where almost everyone belongs to a few churches, and those who don't can be ignored, forgotten, until they bravely complain--and find themselves stigmatized as a result.

Here's where I climb up on my soapbox: the Bill of Rights exists to protect the minority, however small it may be. Sometimes it means protecting the minority from having to complain. That's why we still have, and, I hope (almost said "pray") will continue to have, strict rules against religious expression in schools. The Supreme Court, sadly, has just opened the door to majoritarian steamrolling of the rights religious and non-religious minorities at public meetings. That makes me extremely nervous. If an institution as well-meaning as a Scout Camp can inadvertently stomp all over minority rights, how much more could a town council or commencement committee with an agenda? What's to stop them from outright proselytism, from prayers and expressions and even sermons that seek to convert the very few non-Christians attending a meeting or other public event?

This is how it starts. I hope it ends soon with a re-aligned Supreme Court reversing this bad decision. If not, I worry about what the newly-empowered strident voices of the religious right may have in store for us.
Bill of Rights Camp Morrison Constitution religion school prayer Supreme Court Town of Greece v Galloway
Location: Portland, OR 97229, USA