The Voice of Rachel 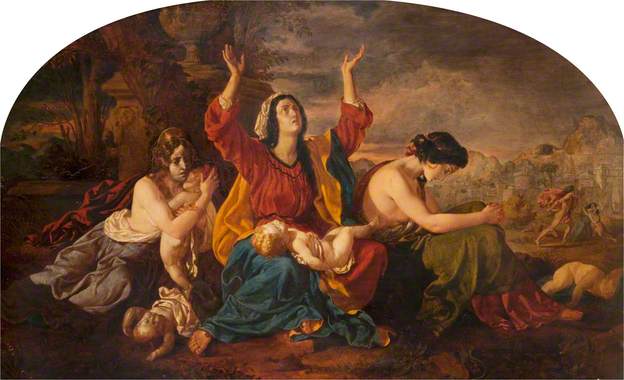 When Herod saw that he had been tricked by the wise men, he was infuriated, and he sent and killed all the children in and around Bethlehem who were two years old or under, according to the time that he had learned from the wise men.Then was fulfilled what had been spoken through the prophet Jeremiah:

“A voice was heard in Ramah,
wailing and loud lamentation,
Rachel weeping for her children;
she refused to be consoled, because they are no more.” (Matthew 2:16-18)
Chances are that, even if you're a regular church goer, you've not heard this part of the Christmas story lately.
You probably know of it. It's appeared in a number of biopics of the life of Jesus. You've probably heard the expression "slaughter of the innocents" or "massacre of the innocents." And still, I doubt if you've heard a sermon preached on it.
I may be wrong. I, in fact, preached several sermons on this text during my years in the ministry; but then, I always liked the difficult texts, the passages that led people to ask, "Why is that even in the Bible?"
In the case of this passage, which is almost certainly fictional, the author had a number of excellent reasons, all part of the Matthean agenda:
1) Herod was a nominally Jewish ruler. It's important to Matthew that the Jews reject Jesus. What better way to do this than have their (corrupt, Roman-appointed) "king" kill a bunch of babies in an attempt to get him?
2) Fulfillment of prophecy: in Matthew's eyes, all of the Hebrew scriptures were looking ahead to the arrival of Jesus. There's a heart-rending passage in Jeremiah about the destruction of Judah by the Babylonian Empire that was just to good to leave out. Unfortunately, there were no stories about Jesus that fit the passage. No problem for Matthew: he made one up.
3) Joseph and Mary escape to Egypt with the infant Jesus for the sole purpose of fulfilling another "prophecy": "out of Egypt I called my son." Again, there's no reason to think this actually happened, but it fits another of Matthew's goals: making Jesus be the New Moses (see also the Sermon on the Mount, in which Jesus teachers a new Torah from a mountaintop). As a baby, Moses barely escaped dying in a slaughter of innocents. Do I smell a manufactured parallel?
The story works admirably with all these agenda items. Unfortunately, it also accomplishes a counter-purpose similar to Noah's Flood, a horrendous story that depicts God as committing the ultimate crime against humanity, a genocide that claimed all but a half dozen lives, not to mention all the animals killed by the rising waters. The death of a couple dozen children does not nearly rise to that level of divine malfeasance, but it echoes with the same horror when applied to the Almighty, working out his purposes in the world at the cost of innocent lives. Do babies really have to die just to prove that Jesus is the fulfillment of prophecy? Matthew thinks so. I think it's a nasty piece of writing that says something horrible about God.
In 1954, science fiction author Arthur C. Clarke published a story entitled "The Star" which earned him a Hugo Award. It's a beautiful piece of writing, economical, spare, giving us all we need to arrive at the same shocking conclusion as the protagonist, a Jesuit astrophysicist aboard an interstellar mission that has found a ruined world that had been home to an advanced civilization until it was destroyed in a supernova, the date of which coincided with a certain blessed event, summed up in the final paragraph of the story:

There can be no reasonable doubt: the ancient mystery is solved at last. Yet, oh God, there were so many stars you could have used. What was the need to give these people to the fire, that the symbol of their passing might shine above Bethlehem?

To those who believe everything happens for a reason, that God is always working his purposes out, such events are taken easily in stride: slaughtered children, plagues, famines, the Holocaust, the Flood. God does big things, and innocents wind up as collateral damage. Oops. But it's all God's will, so it must be okay, right?

No. It's not okay. Innocents die all the time. We're at the one year anniversary of the slaughter of innocents that took place in Newtown at the hands of a lone gunman. When it happened, the nation cried out in protest, demanding changes in gun laws to protect our children against anymore of these abominations; but the gun lobbies cried louder, and two thirds of the laws that changed actually removed restrictions on gun ownership.

Five days a week, I teach music to children who come from shattered homes. Many of them have no idea what it is to have limits, to live a structured life, to know whether the one parent they have will be home tonight at all. The school serves them two meals a day. We are their structure, their consistency, the loving firmness they so desperately need. And at the end of the day, we put them on buses and send them back into the maelstrom of their home lives.

Doing this work can be heart-breaking--and wonderful. This morning, due to a freezing-fog late start (and a classroom teacher unable to show up at all), I was roped into taking a third grade class to breakfast, then entertaining them until another specialist could take over as their sub. I pulled a trick out of my grab bag that I haven't used in some time, since it failed to grab the kids in Banks: a body percussion system that includes claps, stomps, and striking various other parts of the body in sequence. They ate it up. I'm now planning to integrate it into more classes, because these children love it. They also love the playground songs I've been teaching them, songs that (again) just didn't work at Banks.

Yes, they can be difficult, emotional, aggressive; but at the end of the day, they're children. Few of them hold grudges. Even children I've had to discipline frequently are excited to see me when I walk through the lunch room. And as I've said before, I've had more hugs in the few months I've been at this school than in my entire previous career. These children are hands-on, cuddly, friendly, silly, empathic, and, at times, cruel, obnoxious, defiant, disrespectful, rebellious; they're everything children should be, but all of it heightened. It's hard not to love them, hard not to ache for the love they're not getting at home.
The outlook for many of these children is bleak. In just a few years, some will be gang members, some homeless runaways, some pregnant, some in the juvenile justice system. Many will grow up to be just like Mom or Dad: drug dealers, strippers, petty criminals, chronically unemployed, migrant, homeless. Some will not live to see adulthood, taken out by gang violence, overdose, exposure, or abuse.

And for all that, they're still children: innocent, confused, aching for love and approval.

Matthew almost certainly made up this story; and yet it is as true as anything else one can find in the Bible. Innocents die every day, victims of politics and commerce. Sometimes they die on purpose: the historical Herod was a cruel despot, and killing a couple dozen babies was in keeping with his approach to governance; similarly, the Roman occupation that put him in his puppet throne was ruthless in its application of violence to quell any thought of rebellion. The cross on which Jesus died was one of thousands employed by Pontius Pilate and his cohorts to keep the downtrodden of the Empire where they belonged. Babies who got in the way of the Legion were crushed.

Innocents also die as accidental casualties. Our own enlightened president has launched more drone attacks than any of his predecessors, largely because the technology has improved in concert with a growing rejection of using ground forces in the Middle East. He's proud of his record with this aerial terminators, even though the collateral damage can be high. As surgical as they're supposed to be, drones rarely kill just their targets; often there are wives and children in the vicinity, not to mention neighbors who may have nothing to do with Al Qaeda or the Taliban.

In this sense, then, Matthew was absolutely right about the "fulfillment of prophecy": Rachel is always weeping for her children, and will not be consoled, for they are no more.

It feels cruel to say Merry Christmas in the light of such grief. Instead, I urge you to give your children an extra hug tonight. Every one of them is as precious as the babies of Bethlehem, and every baby born since then. Every child is precious, every child a delight, and every child deserves every drop of love any of us can muster.