The World Upside Down 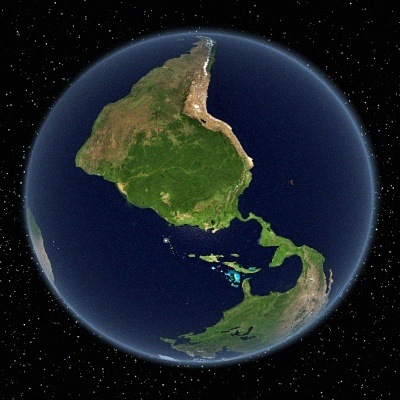 We live on a ball spinning in, and moving through, empty space. The direction we call "down" is toward the center of the earth, while "up" is away from the center of the earth, and toward space. Pictures of the earth, whether photographs or maps, seem to have a top and bottom, and up and down, because, as beings whose perceptions have evolved in a world in which gravity affects everything, they are as fundamental as any concepts can be, and as such we apply them to everything we look at. Had we evolved in free fall, up/down and top/bottom would be meaningless.

So every map has a "top" and "bottom," even though the reality is that, for every human being located anywhere on that map, "up" would mean "above the map" and "down" would mean "under the map." Our culture, evolving as it has in the northern hemisphere, has tended to think of north as up, south as down, even though to any human being anywhere on the earth, the real down is under our feet, while up is the ceiling or the sky. That's how we draw our maps, orient our globes, and frame pictures of the earth taken from space.

And yet, if we stop to think for just a minute, we know how arbitrary this is--and how unfair to those who live in the southern hemisphere. Why should Eurasia and North America get to be on top all the time? Why not draw maps like this instead:

Interestingly (to me, anyway), my Google search for "world upside down" delivered plenty of maps like this--all of them labeled "upside down map." The image is so jarring that, even with all the place names printed right-side-up, the image still feels upside-down to most people--residents of the southern hemisphere included. It messes with our sense of direction to consider the world in this way, even though it's no less arbitrary than our preferred method of depicting it--or, to put it another way, just as true.

And that, my friends, is the true meaning of Christmas, as presented in both the nativity stories found in the gospels. Matthew plays on the birth of Jesus, the Prince of Peace, in a humble setting by having the magi, wise men from the east, look for him first at the palace of Herod, only realizing their fatal mistake when a court theologian points them toward Bethlehem. This story ends horribly, with Herod slaughtering every baby in Bethlehem in an effort to eliminate Jesus as a potential rival--though by then the Holy Family has escaped to Egypt. Luke's gentler version shows us, rather than telling us, the reversal of expectations by first having Jesus born without the use of human sperm (it's the Holy Spirit, rather than her future husband Joseph, who causes Mary to conceive), which leads Mary to sing: "[God] has brought down the powerful from their thrones, and lifted up the lowly; he has filled the hungry with good things, and sent the rich away empty." (Luke 1:52-53) The miraculous birth, when it happens, is announced not to kings, not even to wise men, but to shepherds. Something wonderful has happened, and it turns everything upside down.

As long as I preached the good news, this was, for me, the best part: God takes what liberation theologians call a "preferential option for the poor." This plays out not just in the gospels, but also in the letters of Paul, which revel in the paradox of a death row savior. Then there's this perspective:

The foundational story of Christianity is packed with stories and teachings about upsetting the status quo: a bastard savior born to an unwed mother in a barn, raised as a common laborer, spending his entire preaching career homeless, consorting with prostitutes and traitors, executed by the government for sedition--it's an extremely unlikely resume for a man of such importance to the history of the world. Add to this the content of his teachings--that preferential option for the poor is at the heart of many of them--and you've got change most of the world (the 99%) can believe in.
And yet, clearly we don't. Atheist comedian and political commentator Bill Maher is fond of saying the most prominent followers of Jesus seem not to have read his book. The PSA about hypocritically worshipping a homeless savior while neglecting the beggar on the street was pinned to my church office bulletin board for years, but I was cautious about preaching it after, the first time I did (at a men's prayer breakfast) a church member took strong issue with the idea that Jesus was homeless. It's not uncommon to see Jesus roped into being a standard-bearer for capitalist values, as if profit was a Christian virtue. Contrary to popular American opinion, "The Lord helps those who help themselves" does not appear anywhere in the Bible.

And now this Christmas-critical blog can finally get down to the point of this entry: the holiday that celebrates the birth of an executed homeless preacher has been transformed by American culture into a festival of excess, a time for pumping the economy up with gift dollars, many of them drawn from revolving credit accounts, most of them spent on baubles that will be quickly discarded by the recipients. In fact, the same stores pushing us to buy, buy, buy do excellent trade in the days after Christmas as people come back to them to return, return, return--and while there, to buy, buy, buy something else, in addition to whatever credit they received for the unwanted gift. Christmas as practiced in our time is as utterly corrupt as a religious holiday can be.

I am aware, of course, of the "keep Christ in Christmas" sentiment, usually shared by conservative Christians; but as nearly as I can tell, it's almost always focused on getting people back into church for the holidays. Go ahead and shop, but make sure you don't miss the Christmas Eve candlelight service. There just aren't enough preachers brave enough to take on the Christmas industrial complex to make even a dent in annual profits.

Here's a final illustration of the lost soul implanted in our annual shopping orgy: when I was in junior high or high school (the actual date is lost to me), my family traveled one Christmas to McMinnville to spend the holiday with my grandmother. My Aunt Fran was there, too, which made all of us happy: Fran (whose middle name was "Delight") was a kind, generous woman with a wonderful sense of humor, and we all adored her. At Christmas time, we were also used to receiving a gift of cash from her, and I already had plans for mine. We gathered around the dining room table, and Fran presented us with envelopes. We opened them eagerly, and inside found a note that a donation had been made in our names to a worthy cause. I don't remember what it was, but I'm sure it had something to do with fighting poverty; Fran was a tireless worker for that. I'm ashamed to say that every one of us Anderson boys was so visibly and audibly disappointed to find this, and not money, that Fran opened her wallet and supplemented her generous donation with a ten dollar bill for each of us.

This is what progressive preachers around the world contend with every year at this time: shaking things up by directing our gifts where they should go is just too disruptive to our world view. We spend hundreds on gifts then, as we're leaving the store, drop whatever spare change we have left in the Salvation Army bucket. Perhaps we volunteer some time at a soup kitchen, but then we hightail it home to gorge on rich foods and desserts. We lavish our homes with decorations, while throughout our city the poor are shivering in substandard housing--if they're lucky enough to even have a roof over their heads. Preach about this, and one is quickly labeled a Grinch.

Look back to the source material, though, the stories that are played out in nativity sets (hopefully Santa-free) throughout our nation, and in pageants in every church with enough children to fill out the roles, and there's a preferential option there that is painfully hard to ignore. Nonetheless, we ignore it with impunity, happily filling our arms with Christmas treasures as we bustle about the shopping mall.

I don't know if we'll ever outgrow this practice. It's deeply ingrained in our economy, our culture, our identity as Americans. I hope we can. I hope the day comes when, like Mary, the poor of our cities can exult in a grand reversal, a world turned upside down in which the hungry are filled with good things while the rich go away empty, in which the powerful are cast from their thrones and the poor elevated to take their place. That will be something to sing about. It might even get me to stop hating Christmas.
Labels: Christmas homelessness liberation theology poverty preferential option for the poor