What We Signed Up For 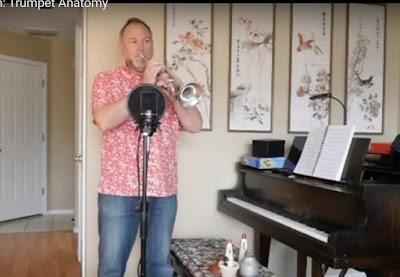 Teaching a remote lesson in the "Music Den."

"...[T]he tough thing about this is we all signed up for this, you know? In a pandemic, that is EMS' time to shine, right? Treating viruses is what we do all day long." The voice is weary, frightened, confused. His name is Anthony Almojer, and he's an Emergency Medical Technician in New York City. He was being interviewed for the March 27 episode of This American Life, entitled "The Test." It's well worth a listen, but be prepared to be moved. I listened to it while putting away dishes and preparing my breakfast, and I had to take three weeping breaks before it was over.

"I didn't sign up for this" was a tired old cliche long before we heard the terms "coronavirus" and "COVID-19." In this time of quiet, isolated upheaval, it's really wearing out its welcome. I hear it a lot from my colleagues as we hold online staff meetings to brainstorm how to teach children over the internet. And on its face, it's absolutely true: I became a music educator to create musical community, to empower children to be musicians together with each other. That can't happen online. There's an unavoidable lag brought on by the limits of both modern technology and the physical laws of the universe: electricity can only travel so fast, even without the unavoidable slowing that comes with running signals through computer processing at both ends.

But even if instantaneous video meetings were possible, there would still be an essential element absent. Human beings evolved to be communal creatures not just with our eyes and ears, but with our whole bodies. The things we do together are richest and most powerful when we share a room as we do them. Dancing with a partner in virtual space can never compare to being face to face with that person, even if the dance has no element of touch. With the right software and good editing skills, it's possible to put together group recordings one person at a time (recording studios have been doing this since the invention of audiotape), but those recordings will always have a cold, artificial perfection when compared to the electricity of a whole group recording--and even then it can't hold a candle to the experience of being in the same space with the performers, and the give-and-take that binds them to their audience and vice versa.

I chose music education as my college major because I wanted to be a band director. I wanted to share my love of music with ensembles of young musicians, rehearsing great music--some of it composed or arranged by me--for performances and competitions. My first year of teaching was rough in that regard: my first job was at a tiny school in eastern Oregon, with only three kids in my concert band and nine in my choir, and I lost it after eleven weeks. Finishing out the year as a substitute teacher in Salem, I realized I belonged in an elementary music room, rather than a band room, but being young and impulsive, I ran off to seminary. Coming back to teaching almost twenty years later, I discovered quickly that music education is best when it's a community thing. I tried using worksheets in my first couple of assignments, but soon realized my twice-a-week students just weren't learning from the pencil work. My initial drive for being a music educator--performing music with young people--had been correct. Children learn to love music by making it, not hearing about it and filling out forms.

From 2005 to the present, my work as a music teacher has centered on this truth. My lessons are most effective when they actively involve children in making music, especially when they're making it together.

This can't happen online, no matter how sophisticated the technology is. The best I can hope to do for an interactive lesson is a video call during which I perform, then have a student perform back to me. It can't be a good echo--the lag interferes with the basic pulse of that technique--and having students do it simultaneously isn't a pleasant experience for anyone, as two dozen internet connections that run the gamut from barely-faster-than-dialup to just-slower-than-light cause every child to be disconcertingly out of sync with every other child, even before we factor in the poor quality of Chromebook microphones and the background noise present in every household.

So instead, what I'm doing is a throwback to the old school teaching methods I had thought I'd left behind once and for all. I record myself making a short presentation--my first two have been about ten minutes long, but my goal is to bring the average down to five--then direct the students to an accompanying slide show or virtual worksheet where they can check their learning. I've got a research project called "My Favorite Song" lined up for older kids, but there's no escaping the reality that almost all of the learning in this medium is going to be individual, rather than communal. And it's not the rewarding one-on-one give-and-take of a private lesson. I can only play for them, and have them play back to me. I can't physically help them adjust their hand position or posture. And we can't play together at all.

This brings me to the "not what I signed up for" part of the essay. Even going back to 1985, as my first stab at teaching was grinding to a halt, it didn't take me long to get over my great conductor fantasies, and realize what this is all about is building musical community. This was my first year in a new school, and a huge chunk of every class has been fostering that sense of community in a student population that hadn't had it for a long time. That's work that may have to start all over again in September (assuming we're able to be back in the building then--which might be overly optimistic). I didn't become a teacher so I could have a desk job, teaching through a screen. It's not at all what I signed up for.

Except it absolutely is. Wanting to rehearse and conduct a band may have gotten me into teaching, but I soon learned that these things were secondary to what mattered most: meeting kids where they were, taking them as I found them, and making their world a little better, at least while they're in my care. Sometimes it can be spectacularly better, as a lesson comes together and the children experience the miracle of being in the musical group mind. At other times it's all I can do to just be one sane, caring adult in their otherwise hellish lives--and keep them safe from each other. Most classes fall somewhere between those extremes, but the common denominator is the children. I'm there for them even more than I'm there for the music--and I'm all in for the music.

Where the children are at this time is my virtual classroom. It doesn't have any of the (literal) bells and whistles of my music room. We can't use the Orff instruments, ukuleles, drums, Boomwhackers, or any of the hundreds of other instruments I would love to have in their hands. We can't even use something as low tech as rhythm sticks, or play a stone-passing game. Forgetting all the musical technology, we're not able to use the one instrument it doesn't take hands to play and sing together. And dancing together? We might as well be on separate planets.

It's tempting to dwell on these limitations. But the reality is that the children, like me an my family, are trapped in their homes until it's safe to be with other people once more. Some are in apartments that make my own small house look like a mansion. Music doesn't stop being important to them just because I have to teach it in such a limited way. The richness of real-time, real-space work may be horribly diluted, but they're hungry for whatever I can provide them with.

And that is what I signed up for. I have to keep reminding myself that no matter how important teaching music is to me, being in this relationship with these children is what matters most. I'm bringing truth and beauty to them at a distance, making my part of their remote learning both fun and informative.

Like the EMTs of New York City, I know that this is my moment to shine. But also like them, I'm eager for this moment to pass, so that once again I can be about the business of building musical relationships in person, in community, in space my students share with each other--and with me.
Labels: Corona Virus COVID-19 distance learning remote learning shelter in place social distancing
Location: Portland, OR 97229, USA